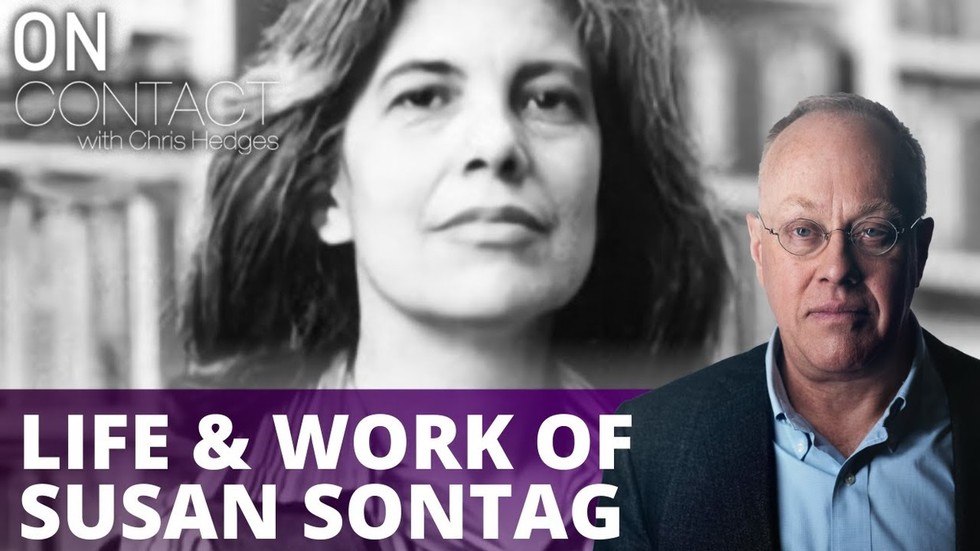 On Contact: The Life And Work Of Susan Sontag

On the show this week, Chris Hedges discusses the writer and intellectual Susan Sontag with her biographer Benjamin Moser.

Susan Sontag, who wrote about art, feminism, politics, celebrity, style, homosexuality, illness, fascism, and war, was that rare species in American society – an intellectual celebrity. She traveled to Cuba as a naive political pilgrim, North Vietnam during the war, now older and more skeptical, and was in Germany when the Berlin Wall was breached and eradicated as a barrier between East and West Germany. She was in Sarajevo when the city was being hit with hundreds of shells a day and under constant sniper fire from the besieging Bosnian Serbs. An average of 10 people were killed in the city daily. She achieved international notoriety, but lived an outward life of glamor and even, at the end, opulence. However, she was tortured by insecurity, plagued by a series of failed love affairs, and struggles with her own sexuality that at once animated and undermined her honesty and power as a writer. She could be cruel and vicious to her closest friends, was endowed with a haughty and suffocating arrogance, which she wielded with acerbic precision, and, despite her undeniable intellectual prowess, never achieved the depth and erudition of one of the few intellectuals she admired, Hannah Arendt.

Sontag, in many ways, embodies an age now lost – one where ideas still mattered. She understood the vital importance of culture, especially in a country descending into banality and unbridled consumerism, and she fought with unmatched ferocity to protect it. She understood that a love of books, which impart the ideas, wisdom, pathos, regrets, tragedies, and glories of the past, keeps us moored and rooted in a world that is swiftly forgetting where it came from, how it got here, and where it is going.

Benjamin Moser’s majestic biography ‘Sontag: Her Life and Work’ does what all great biographies do: it captures not only the life of an individual in unsparing honesty, but sets this life in a social, historical and culture context, illuminating one of the crucial turning points in American history.