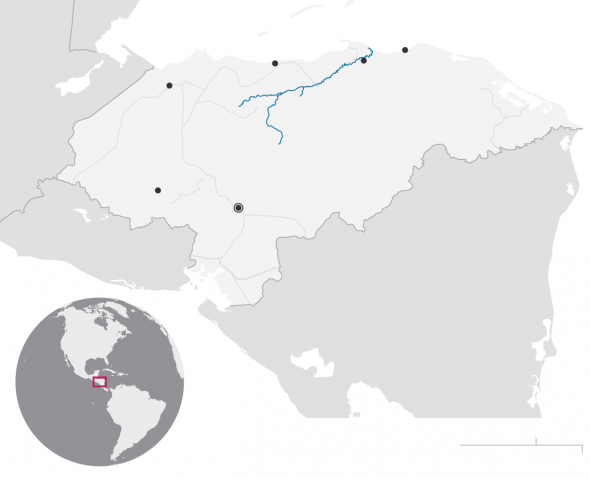 Above Photo: The Guardian

Tomorrow, June 28, 2016, marks seven years since the coup d’etat in Honduras – the day that former President Manuel Zelaya was kidnapped by the Honduran army and then flown out of the country from an air field controlled by the U.S. military. That event sent shockwaves through the region and the world and was denounced by the United Nations, the Organization of American States (OAS), and the European Union. Honduras was suspended temporarily from the OAS.

Observers and experts warned that if Zelaya was not restored to office and the forces behind the coup were allowed to proceed without any accountability, it would be disastrous for Honduras and the region. Some feared widespread human rights violations and targeting of political opposition harkening back to a time of CIA-trained death squads and disappearances, when Honduras was a front in the U.S.’s covert war against liberation movements in neighboring countries.

Seven years and hundreds of lives later, those predictions have proven true. Opponents of the coup regime, leaders of the resistance, land rights activists, journalists, and human rights lawyers have been killed in the wake of the coup. Among the most recent tragic examples is that of Berta Caceres, a fearless, committed, and exuberant advocate for the Lenca people against the construction of a dam project at Rio Blanco. Berta was shot and killed in her home on March 3, 2016.

Three years before her death, she acknowledged the danger she faced:

The army has an assassination list of 18 wanted human rights fighters with my name at the top. I want to live, there are many things I still want to do in this world but I have never once considered giving up fighting for our territory, for a life with dignity, because our fight is legitimate. I take lots of care but in the end, in this country where there is total impunity I am vulnerable… When they want to kill me, they will do it.

Three months after her murder, a former Honduran soldier confirmed for The Guardian the existence of the hitlist, with Caceres’ name on it, in the possession of a unit trained by U.S. special forces.

The U.S. has historically played a heavy-handed role in Honduras, which became an outpost from which it conducted covert action in the region during the Cold War, with disastrous results for human rights defenders and activists there. To date, there has been no real accountability for the role the U.S. played in Honduras in training and arming security forces who committed unspeakable violence against political opponents. Likewise, on the Honduran side of the equation, there has been little accountability over the years. Indeed, at least one confirmed member of Battalion 3-16, a notorious death squad trained by the CIA in the 80’s, was active in the political intrigue after the 2009 coup.

Not that there weren’t efforts at the time to hold the U.S. government accountable for its role in region. Organizations like CISPES (Committee in Solidarity with the People of El Salvador) were working to raise these concerns and stop economic, political and military intervention as early as 1980. The Center for Constitutional Rights, representing members of Congress and victims of human rights violations in the region, sought to bring these disastrous and harmful policies to light in court in cases like Crocket v. Reagan, challenging the administration’s undeclared war in El Salvador, and Sanchez-Espinoza v. Reagan, which took aim at U.S. officials’ complicity in murder, torture, rape and other human rights violations in Nicaragua. Dellums v. Smith sought to compel an investigation into credible allegations of illegality in the administration’s conduct in Nicaragua and some believe the case led to revelations about the sale of arms to Iran to fund support for the contras, who were largely trained from inside Honduras.

And then there was the judgment of the International Court of Justice in a case brought by Nicaragua which found the U.S. guilty of violating international law for its mining of Nicaragua’s harbors and supporting and arming the contras. The court ordered the U.S. to pay reparations to Nicaragua. The U.S. ignored both the judgment and calls by the international community to comply with it.

Fast forward to Honduras after the 2009 coup: Here, the U.S. government helped to undermine democracy and the strong resistance that formed in the wake of the coup when it worked against the restoration of the democratically-elected president and pushed for the recognition of  an election that was boycotted by respected election observers who saw no possibility of a free and fair process in the circumstances at the time. The U.S. was the first country to officially restore relations with Honduras after the controversial election and pushed others to normalize relations with the post-coup regime as well. Consistent with its long-standing modus operandi, the U.S. continued to provide aid and military training and support whileexpanding its base of operations there.

In doing so, the U.S. government has helped to seal the fate of hundreds of resistance activists, journalists, campesinos, and, yes, Berta Caceres. But Honduran and U.S. human rights activists and organizations working across national lines have sought to keep speaking truth to the power on all sides of the equation – by amplifying the struggle and stories from Honduras and the impact of the U.S. on events inside. CCR has again been part of these diverse efforts through representing family members of a youth killed by the Honduran military in a case against an engineer of the coup and de facto president Robert Michelletti, representing the alternative true commission in efforts to gain access to information about the coup from the U.S. government through FOIA requests, the submission of a complaint to the International Criminal Court, and joining with others in pushing for an end to the exploitive, extractive and self-serving policies of the U.S. in Honduras.

Last week, U.S. Representative Hank Johnson introduced unprecedented legislation to stop U.S. aid to Honduras. The Berta Caceres  Human Rights in Honduras Act would suspend U.S. support for military operations and equipment and training until the Honduran government investigates credible reports of human rights violations. The legislation is an important and necessary step and should be supported.

Another momentous event is the Border Convergence organized by SOA Watch that will be held October 7-10, 2016 in Nogales, Arizona and Nogales, Mexico. CCR, along with many other organizations, is endorsing this event which looks critically at the impact of U.S. policies in the region that exacerbate repression and economic crisis on the one hand and the xenophobic immigration laws and policies encountered by migrants and refugees in the U.S. on the other. It is a way of highlighting the absurdity of decrying immigration and blaming migrants and refugees for fleeing situations we helped create and, worse, benefit from.

While there is much to be done and hearts are still heavy with the loss of Berta and so many others, these and other efforts are cause for hope in an otherwise very dark time.

To show your support for the Berta Caceres Human Rights in Honduras Act, click here.