On First Day Of New Year, US Attacks Migrants With Tear Gas

Above Photo: A migrant takes cover after U.S. Customs and Border Protection throw tear gas to the Mexican side of the fence in Tijuana, Mexico on Jan. 1, 2019. | Photo: Reuters

Reports of stranded migrants in the Mexico-United States border being fired with tear gas shells by United States border patrol surfaced Tuesday as another migrant “caravan,” estimated at 15,000 people, is reportedly getting ready to leave Honduras on Jan. 15.

“They say they are even bigger and stronger than the last caravan,” said Irma Garrido, a member of the Reactiva Tijuana Foundation migrant advocacy group.

The new caravan will probably be joined by more people from El Salvador and Guatemala. According to Garrido, they will not immediately attempt to reach the Mexico-U.S. border where a large number of Central American migrants are currently stranded and face obstacles to apply for asylum.

“They will stay in the south of Mexico in Chiapas and Oaxaca. Their aim is to request work there,” Garrido told the Los Angeles Times. 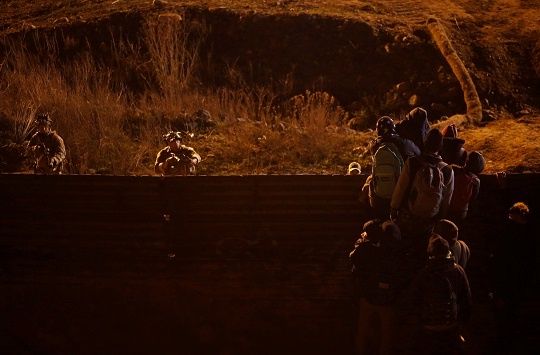 Lopez Obrador made humane “comprehensive” immigration policy a central tenet of his campaign platform in 2018 and signed a deal with the leaders of the Northern Triangle countries (Honduras, Guatemala, and El Salvador) to create “programs (and) projects … in order to create jobs and fight poverty in the region,” just hours after being sworn in on Dec. 1.

A local media from Chiapas reported that although the new caravan will not go to Tijuana, some of the immigrants plan to head there, hoping to enter the U.S.

A large number of Central American migrants are in Tijuana where violence is becoming a regular occurrence.

The stranded migrants, on the very first day of the new year, received tear gas shells from U.S. border patrol.