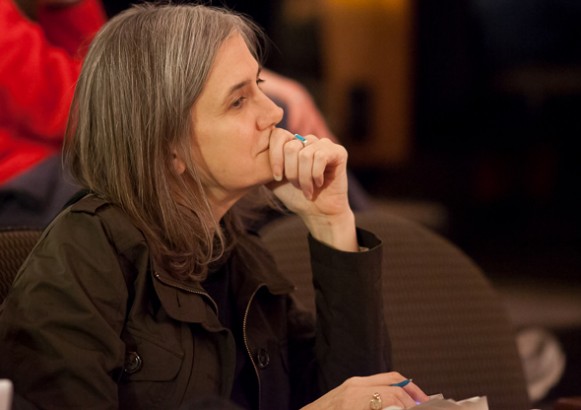 On Strip Searches And Press Freedom In North Dakota

Monday was a cold, windy, autumnal day in North Dakota. We arrived outside the Morton County Courthouse in Mandan to produce a live broadcast of the “Democracy Now!” news hour. Originally, the location was dictated by the schedule imposed upon us by the local authorities; one of us (Amy) had been charged with criminal trespass for “Democracy Now!“‘s reporting on the Dakota Access Pipeline company’s violent attack on Native Americans who were attempting to block the destruction of sacred sites, including ancestral burial grounds, just north of the Standing Rock Sioux Reservation.

When responding to an arrest warrant, one must surrender to the jail by about 8 a.m. if one hopes to see a judge that day and avoid a night in jail. So we planned to broadcast live from 7-8 a.m., then head to the jail promptly at 8 a.m. to get processed through the jail and fight the trespass charge in court.

To our surprise, as we landed in Bismarck on Friday, we learned that the prosecutor, Ladd Erickson, had dropped the trespass charge, but filed a new one: “riot.” We were stunned. In an email to both the prosecutor and our defense attorney, Tom Dickson, Judge John Grinsteiner wrote, “The new complaints, affidavits, and summons are quite lengthy and I will review those for probable cause on Monday when I get back into the office.” We were told by several lawyers familiar with North Dakota criminal law that judges almost never reject a prosecutor’s complaint. The arraignment was set for 1:30 p.m. local time, Monday.

We spent the weekend reporting on the controversial Dakota Access Pipeline, with the threat of the riot charge never far from our minds. The 1,100-mile-long, $3.8 billion pipeline is designed to carry almost 500,000 barrels of crude oil from the fracking oil fields of North Dakota to Illinois, then onward to the Gulf of Mexico. That is why thousands of people have been at the resistance camps where the Dakota Access Pipeline is slated to cross under the Missouri River. If the pipeline leaks there, the fresh-water supply for millions of people downstream will be polluted.

Morton County Sheriff Kyle Kirchmeier runs the jail in Mandan and is responsible for how people are processed there. As the protests have mounted during the past six months, Kirchmeier and the local prosecutors have been leveling more and more serious charges against the land and water protectors, with an increasing number of felony charges. More than 140 people have been arrested so far. Those we spoke to told us a shocking detail: When getting booked at the jail, they were all strip searched, forced to “squat and cough” to demonstrate they had nothing hidden in their rectums, then were put in orange jumpsuits. The treatment was the same for Chairman of the Standing Rock Sioux Tribe Dave Archambault, to a pediatrician from the reservation, Dr. Sara Jumping Eagle, to actress Shailene Woodley, star of the films “Divergent” and “Snowden,” among others.

I asked Chairman Archambault if strip searching was common for low-level misdemeanors. “I wouldn’t know, because that was the first time I ever got arrested,” he replied. Dr. Jumping Eagle remarked, “It made me think about my ancestors, and what they had gone through.” Shailene Woodley told us, “Never did it cross my mind that while trying to protect clean water, trying to ensure a future where our children have access to an element essential for human survival, would I be strip searched. I was just shocked.”

As we prepared to enter the courthouse for the 1:30 p.m. arraignment on Monday, 200 people rallied in support of a free press, demanding the charges be dropped. A row of close to 60 riot police were lined up in a needless display of force in front of a peaceful gathering, threatening to arrest anyone who stepped off the curb. Then word came from our lawyer: The judge had refused to sign off on the riot charge. The case was dismissed, and we marked an important victory for a free press.

The free press should now focus a fierce spotlight on the standoff at Standing Rock—a critical front in the global struggle to combat global warming and fight for climate justice. Indigenous people and their non-native allies are confronting corporate power, backed up by the state with an increasingly militarized police force. Attempts to criminalize nonviolent land and water defenders, humiliate them and arrest journalists should not pave the way for this pipeline.