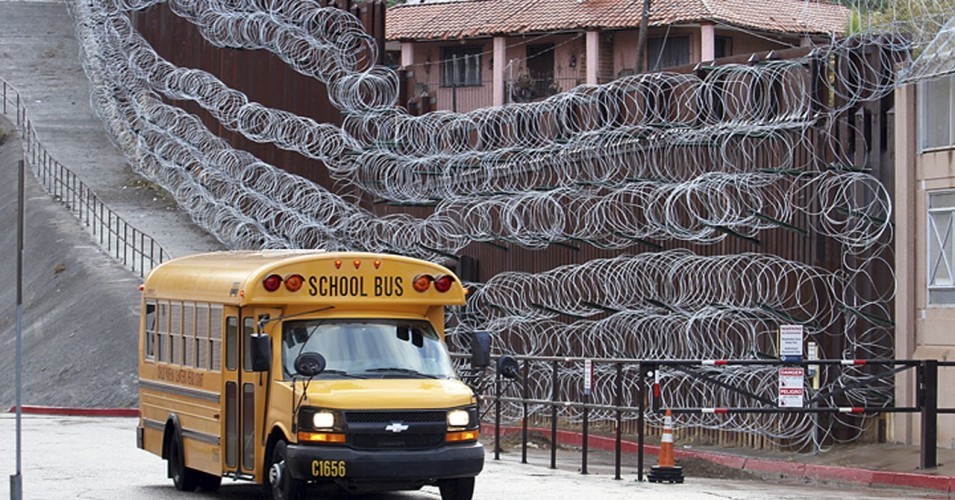 On This Day Of Thanks And Mourning, A Call To Demilitarize The US Border

Above Photo: In this Monday, Feb. 4, 2019 photo, a school bus rolls past the razor wire-covered fence at East International and Nelson Streets in downtown Nogales, Ariz. (Photo: Jonathan Clark/Nogales International via AP)

Deploying troops to the border is inhumane and potentially illegal. We are fighting back.

One year ago this week, as families across the country were preparing to sit down together for a Thanksgiving (or Day of Mourning) meal, families at the U.S.-Mexico border were facing a potentially deadly threat; just one day prior, Donald Trump had authorized U.S. troops to use lethal force against migrants and asylum seekers.

Since then, the militarization of the southern border has only intensified. Approximately 7,000 military service members are now stationed there, operating under continued unclear rules of engagement and nebulous legal authority to surveil, detain, and even kill.

“Instead of a system increasingly designed to instill fear and trauma as a deterrent, we must strive for a system that takes places human rights first and centers the dignity and empowerment of displaced and migrant communities.”

Troops are not needed on U.S. borders to guard against people coming to this country in search of asylum, people who are often some of the world’s most vulnerable. They are fleeing conditions of oppression, economic exploitation, armed conflict, environmental destruction, sexual violence, humanitarian crisis, and more—many of which the United States helped to create. Instead of armed human walls, they should be greeted with doctors, social workers, lawyers, and robust humanitarian assistance. Instead of a system increasingly designed to instill fear and trauma as a deterrent, we must strive for a system that takes places human rights first and centers the dignity and empowerment of displaced and migrant communities.

The militarization of our borders is an outgrowth of an even wider problem—excessive spending, lack of oversight, and lack of accountability at the Departments of Defense (DOD)  and Homeland Security (DHS). When Congress did not appropriate as much money as Trump wanted for his long-promised racist border wall, where did he turn? To the overstuffed coffers of the Pentagon. He has since diverted $3.6 billion meant for military construction projects to his vanity wall. That is why in any effort to demilitarize the border, we must also drastically cut DOD and DHS funding — federal agencies that currently fuel our growing societal militarization — and redirect those funds to address far more pressing human needs. This includes defunding agencies like Immigration and Customs Enforcement (ICE) for its mass deportation, criminalization, and dehumanization of immigrant communities.

In the midst of the largest displacement crisis in recorded history, borders around the world have become sites of political conflict — weaponized in support of a surging tide of white supremacist, xenophobic, and militaristic authoritarianism. In order to implement and sustain his border policies, Trump illegally declared a national emergency, which he argued provided him with extraordinary powers to use Pentagon resources for his wall. This move was straight out of the authoritarian playbook — another step toward eroding the rule of law, human rights, and the separation of powers, and advance the settler-colonial project of fortressing the United States.

The Trump administration’s militarization of the U.S. southern border is pernicious, authoritarian, and deadly.

Building a Movement for Justice

To push back against this dangerous border militarization, a cross-movement coalition — including migrant justice, border community, and antiwar progressive groups, operating under the slogan #InvestigateNow — has been organizing with members of Congress to demand that Acting DOD Inspector General Glenn A. Fine launch an investigation into the misuse and politicization of U.S. service members and Pentagon resources. Over one hundred thousand activists, dozens of national organizations, and 34 members of Congress joined forces earlier this month calling on the DOD IG to investigate.

An independent investigation into Trump’s misuse of U.S. troops would be a significant step toward understanding the financial and social costs it has had on asylum seekers, border communities, service members, and the indigenous nations whose sovereignty a militarized border violates. But even that would be only the first phase of a much larger fight.

It will not be easy. But by bringing our communities together in alliances like the #InvestigateNow campaign, we can magnify our collective powers. We can tear down walls, resist militarism, and make our vision for humanizing our borders a reality.