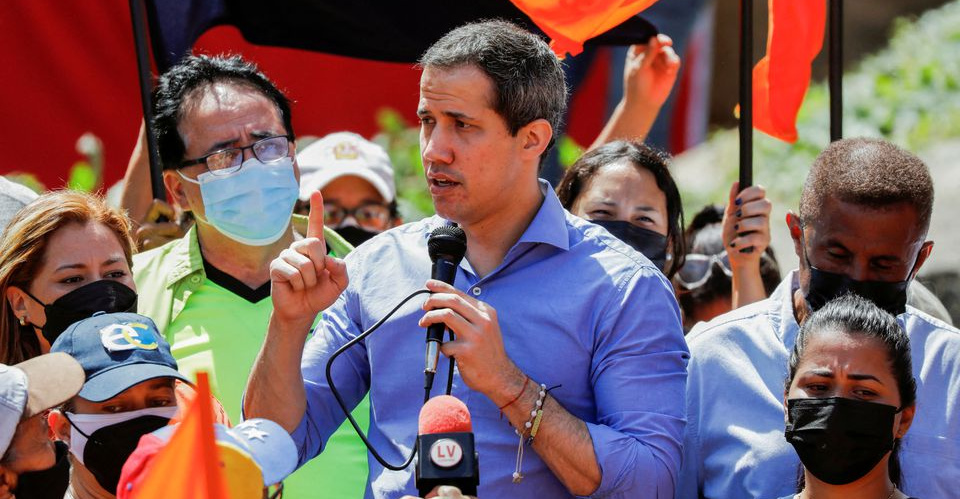 On Venezuela, Only Hawkish ‘Dissent’ Allowed

Another NATO war means a media establishment in a propaganda frenzy once again. Corporate media outlets have cheered Washington for throwing fuel to the fire in Ukraine, with some demanding that the administration escalate yet more (FAIR.org, 1/28/22, 2/28/22, 3/18/22, 3/22/22). Be it through their choice of pundits, or their own reporters haranguing White House officials for not sending enough weaponry, one thing is clear enough: Elite media will only criticize official foreign policy for not being hawkish enough.

When it comes to Venezuela, corporate journalists have historically had little to criticize, given Washington’s “maximum pressure” regime-change efforts (FAIR.org, 12/19/20, 4/15/20, 1/22/20, 9/24/19, 6/26/19, 5/1/19).  However, a recent unexpected trip by a high-level US delegation to Caracas to meet with Venezuelan President Nicolás Maduro opened the spectrum of opinion ever so slightly. Besides the traditional bias and dishonest coverage, a familiar pattern emerged: Just like with Russia/Ukraine, the only allowed criticism of official policy comes from the right, demanding that the US be as extreme as possible in dealing with its “enemies.”

The early March talks, which broached subjects such as sanctions relief and Venezuela resuming oil supplies to the US, were soon discontinued after backlash from hardliners. But they had one clear loser: US-backed self-proclaimed “Interim President” Juan Guaidó, who was “sidelined” (Washington Post, 3/11/22). The Jeff Bezos–owned paper reported that the “notable leader” was left out of the plans (though his “notable” status is very dubious at the moment—AP, 3/2/22). The Post article acknowledged further down that the opposition figure “has little practical authority in the country and little influence outside.”

However, in Guaidó’s hour of need, corporate journalists came to his aid, treating as newsworthy that the hardline oppositionist was “angered” (Miami Herald, 3/7/22) or “astonished” (El País, 3/10/22) about not being informed of his Washington bosses’ plans in advance.

Efforts to prop up the fading politician included the oft-repeated lie that he is recognized by “more than 50” (Washington Post, 3/9/22) or “almost 60” countries (AFP, 3/7/22), which was true in 2019. The current number, based on a recent UN General Assembly vote to recognize the credentials of the Maduro government, is 16 (Venezuelanalysis, 12/8/21).

Soon after, news outlets gave Guaidó the floor to “press” the White House against dealing with the Venezuelan government, as well as to warn oil corporations such as Chevron to not pursue increased activity in Venezuela and “stick with democracy” (Reuters, 3/22/22), which in this instance stands for unconstitutionally replacing an elected president with a legislator whose term expired in 2020.

A Guaidó aide even asked, “What’s the value of the commodity of freedom?” Given how cheaply US officials and their media stenographers bring it up, not that high.

Reuters went further than most in the damage-control operation, telling readers more than two weeks after the fact that “the US officials met Guaidó after attending the meeting with Maduro.” The claim is very dubious, given prior reporting that the opposition frontman and the US delegation “didn’t meet face to face” (Washington Post, 3/11/22). Given Guaidó’s communications policy, which prompted him to boast of a phone call with Slovakia’s foreign minister, it seems unlikely he would host a White House delegation and stay quiet about it.

The one “consequence” of the surprise Caracas summit was the release of two detained US citizens, Gustavo Cárdenas and Jorge Fernández. Cárdenas was one of the “Citgo 6” oil executives sentenced in 2020 for corruption, whereas Fernández was arrested in 2021 after allegedly entering the country illegally from Colombia while carrying a drone.

Outlets were happy enough to echo the administration’s claim that the two had been “wrongfully detained” (Al Jazeera, 3/9/22) and were used as “political pawns” (BBC, 3/11/22), but not so much to offer details on the corruption charges brought against the Citgo 6. Certainly none connected Fernández’s drone arrest to the assassination attempt against Maduro in August 2018, which used explosive-laden drones brought in from Colombia.

Some went even further by referring to the imprisoned US citizens in Venezuela as “hostages” (CNN, 3/16/22; Wall Street Journal, 3/9/22). It seems no crimes can be committed by US nationals in countries deemed evil by Washington.

Similarly apologetic were the references to Luke Denman and Airan Berry, former US Green Berets serving 20-year sentences after taking part in Operation Gideon, a failed paramilitary/mercenary invasion of Venezuela. Despite their own confessions and public statements by Gideon organizer Jordan Goudreau confirming their involvement, the two former soldiers are only “accused in a plot” against Maduro (Washington Post, 3/6/22; CNN, 3/8/22).

The Washington Post brought up the case of Matthew Heath, a “former Marine who was arrested while traveling along the Caribbean coast of Venezuela,” without noting that he was caught with heavy weaponry and explosives (Venezuelanalysis, 9/14/20).

An Overdose Of Rubio

To the extent that the media establishment was willing to entertain the possibility of Washington engaging with Caracas again, it did so on its familiar dishonest, US exceptionalist terms. As such, corporate pundits (NPR, 3/13/22; Financial Times, 3/13/22; Washington Post, 3/11/22) weighed the pros and cons of dealing with an “authoritarian” government. Others called it “autocratic” (Guardian, 3/14/22; Financial Times, 3/12/22; CNN, 3/8/22). The New York Times used both (3/8/22).

Laying down the law, Western journalists wrote that, in order for negotiations to proceed, Biden wants “progress toward restoring democratic governance” (Bloomberg, 3/10/22) and Maduro must “set aside his authoritarian impulses” (AP, 3/10/22), thus establishing both the Venezuelan president’s dictatorial tendencies and the country’s lack of “democratic governance” as background facts.

But the most remarkable aspect of coverage was that the US politicians asked to weigh in on the Biden administration’s calculations were invariably foreign policy hawks. CNN (3/8/22) cited no less than five US politicians criticizing the rapprochement and the possibility of sanctions relief. The most featured by far was Sen. Marco Rubio (R.–Florida), who got to ramble unopposed about “narco-dictators” (Washington Post, 3/6/22; Bloomberg, 3/30/22; Financial Times, 3/13/22; Newsweek, 8/3/22).

No corporate outlet sought the opinion of those US representatives who in the recent past have strongly called for sanctions relief because of their documented impact on the civilian population (Venezuelanalysis, 8/14/21, 6/17/21, 2/11/21).

Whether to lift or relax sanctions imposed on Venezuela in recent years is—leaving aside the Guaidó charade—the key decision facing Washington. Multilateral bodies and human rights rapporteurs have decried the measures, which have led to over 100,000 deaths, according to former UN Special Rapporteur Alfred de Zayas.

In fact, the first key blow against the industry came in August 2017, when state oil company PDVSA was shut out of global credit markets. Studies on crude output pinpoint a sharper drop beginning at this point, and $6 billion in lost revenue in 12 months. The seminal report by the Center for Economic and Policy Research (CEPR) also begins with the 2017 sanctions. Whether a concerted effort or lazy copy-paste, saying that the measures began only in 2019 is a disingenuous way to claim that Venezuela’s economic collapse has nothing to do with US sanctions.

Viewing the sanctions debate though the prism of US imperial interests, corporate journalists will  state baldly that the deadly measures are meant to “force Maduro” from power (Washington Post, 3/6/22; Financial Times, 3/6/22); Washington’s right to do so is never in question. As such, Biden changing course is presented as a “gamble” at best (Bloomberg, 3/15/22) or a “strategic blunder” at worst (Wall Street Journal, 3/7/22). The argument against sanctions is that they are “counterproductive,” because they are “ineffective in reducing the power of the government” (Forbes, 3/24/22). Regime change remains openly the goal.

Readers are assured that sanctions were “intended to help restore Venezuelan democracy” (Guardian, 3/6/22) or “bring reform” (Washington Post, 3/9/22). Nowhere to be found are details of the devastating harm these unilateral measures inflict on the civilian population. Consequences, from lost crops to resurgent epidemics, are out of sight and out of mind.

Faced with the White House contemplating changes (even for the wrong reasons) to policies that have brought tremendous suffering for ordinary people, corporate media opted to obfuscate the sanctions’ impact, present the debate in the most US-exceptionalist terms, and platform the most hardline positions. In this way, the media establishment manufacture consent for silently killing Venezuelans.