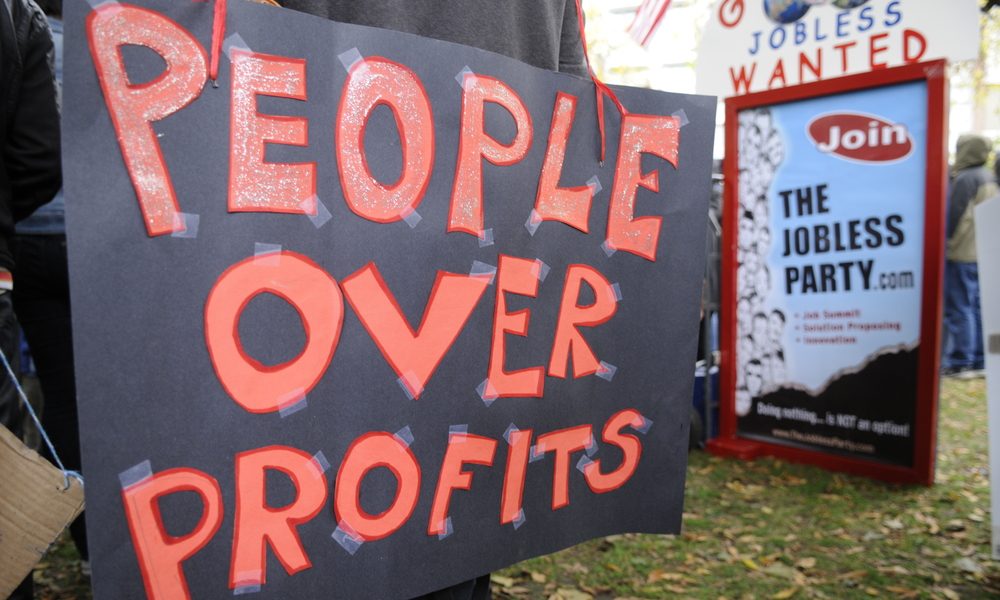 Over the last decade, Congress’s approval ratings have hovered around the mid-teens or low 20s, reflecting the reality that our representatives in Washington, D.C., serve the needs of big donors while throwing an occasional rhetorical bone to the “essential” workers who actually make the country function. Congress’s handling of the current crisis of the pandemic is unlikely to improve its ratings.

Working Americans are facing an unprecedented disaster. Before the virus hit, half of them lived paycheck to paycheck and didn’t have $400 saved for an emergency. Now they have been ordered to stay home. Many have no income while their rents, utility bills, student loans, and credit card debts are accruing.

The small businesses—restaurants, gyms, and stores—that provide half of the nation’s jobs were ordered to shut down. Their rents are accruing. And with no income coming in, many have little chance of repaying what they owe when the economy reopens.

Congress has responded in typical fashion by protecting its donors—the investor class—the only people in the country who didn’t need help. By unrecorded voice vote, Congress passed the CARES Act, rushing $1.77 trillion in taxpayer money out the door to help their friends on Wall Street. This bailout also saved the stock market and preserved the wealth of the 10 percent of Americans who own 85 percent of the stocks and bonds.

And to add insult to injury, the Federal Reserve is providing trillions more in free money to fortify the banks so they can continue to collect 21 percent interest on your credit cards and buy up your distressed assets. Ordinary Americans will receive a one-time payment of $1,200, if their creditors don’t scoop it up first, and some unemployment relief, if their state’s system is functioning after the flood of new claims. (In the last six weeks, more than 30 million workers have applied for unemployment compensation.)

Governments of other countries are covering wages to keep workers in their jobs until this emergency is over. A similar plan was proposed in both the Republican-controlled Senate and the Democratic-controlled House. But it wasn’t taken seriously or brought to the floor for debate. Neither of the two corporate-backed parties that share power in the U.S. believe that any drastic measures are necessary to save Main Street.

Congress did set up a loan program for small businesses, the Paycheck Protection Program (PPP). But the big banks who were put in charge of distributing the loans gave much of the money to publicly traded chains that were allowed to claim small business status under a loophole written into the bill by their lobbyists.

Many economists are predicting a dangerous explosion in a matter of months when rents and mortgages cannot be paid, businesses fail, and temporary layoffs turn into permanent job losses.

As was the case in the 2008 bailout, Congress has assured that none of the pain will be borne by its big donors. Bank of America, Citibank, Wells Fargo, and JPMorgan Chase won’t lose a penny. Their executives will get their bonuses and their investors will get their dividend checks. Once again, big banks have been allowed to collect their profits on risky loans even when those loans go bad. In other words, the big banks’ risk has been socialized—covered by the taxpayers—while their profits remain privatized. This is capitalism in the 21st century.

And following the playbook of the 2008-09 bailout, the Fed is making funds available to their Wall Street cronies to buy up distressed Main Street assets at fire-sale prices. Big companies will pick up small companies. Blackstone will buy up more real estate. The economy will be even more centralized.

States and municipalities are also facing rapidly approaching disasters. Unlike the federal government, states and cities cannot run a deficit or print money. They have to actually pay for things like public services and unemployment insurance by collecting revenues from sales taxes and income taxes. And they are not getting those revenues.

Nevertheless, only about 5 percent of the $3 trillion in total coronavirus relief has gone to help the 50 states. Senate majority leader Mitch McConnell suggested that Congress might let states go bankrupt, meaning among other things, that workers’ pensions would likely evaporate.

House speaker Nancy Pelosi was recently asked whether she and Senate minority leader Chuck Schumer made a “tactical mistake” in not providing any help for state and local governments in the relief bills. In response, she told CNN’s Jake Tapper to “just calm down.”

Tapper reportedly did calm down. But it’s not clear if ordinary Americans will just calm down when their businesses are closed and their families are thrown out into the streets.

The Democratic Party that controls the House still tries to sell the outdated notion that it is fighting for working people. Yet, despite its powerful allies in the mainstream press, fewer and fewer Americans are buying the ruse. First, we all just watched as the entire Democratic Party establishment came together to stop an insurgent candidate in the presidential primaries, Bernie Sanders, whose major sin was his refusal to sell out to Wall Street donors. Instead, the working man’s party has united behind Joe Biden, a reliable servant to Wall Street banks for nearly 50 years.

In a time when the health of our nation depends on a health care system capable of providing our neighbors with testing and treatment for a highly contagious disease, even if there is no profit to be made, the nominee for president of the working man’s party has promised his donors to veto a Medicare-for-All bill if it crosses his desk.

A second reason working Americans are less willing now to “vote blue no matter who” is that they remember the 2008-09 bailout. Back then, Barack Obama was in the White House and the Democrats controlled both the House and Senate. Wall Street banks crashed the economy by selling exploding mortgages to poor people and then packaging those worthless mortgages into worthless investment securities. Obama bailed out the banks—his major campaign sponsors and donors—and he let ten million Americans lose their homes. Wall Street companies like Blackstone were allowed to buy up foreclosed homes for pennies on the dollar, and then very quickly raise rents on Americans. As a result, Black and Brown people who graduated from four-year colleges lost 70 percent of their wealth under the first Black president, according to a Federal Reserve study.

The Democratic Party learned one important lesson from 2008: it is best not to control the office of the president and both houses of Congress. Too much power makes it harder to serve the interests of the big donors while still pretending to fight for ordinary working Americans. It is much better to split power and blame the Republicans for screwing working people.

Did you ever wonder why Democrats always lose when Republicans try to game the system to silence minority voices? Republicans encounter little resistance when they gerrymander districts to make them safe from minority voters, suppress minority voters at the polls, enact filibuster rules that allow corporate interests to block popular legislation, and preserve the arcane Electoral College. All of these schemes benefit the corporate patrons of both parties by making it less costly to rig the system. Corporations don’t need to own all 535 members of Congress, or even a majority of them, to control the levers of power.

It is generally acknowledged that the situation today is more dangerous than the financial collapse of 2008. The coronavirus has shut down large parts of the economy. And because we were so ill prepared for the pandemic, there is great uncertainty as to when or how the economy will restart, or what it will look like.

Since our government has refused to bail out small businesses or ordinary working people, prominent economists like Professor Michael Hudson at the University of Missouri at Kansas City have warned that the government will need to intervene and allow Americans to write down debts that cannot be paid, or we will face economic meltdown. But writing down debts would harm the big banks, so it probably won’t happen under this Congress or this president.

I like to end columns on a positive note. I have long advocated using democratic means to wrest political power from corporations and return it to the people. But right now, the economy appears to be headed off a cliff and the corporations have a tight grip on all the controls. And I am not smart enough to know how people can take back power without a violent revolution. One thing I am sure of is that when American families start getting kicked out of their homes, the Democrats will blame the Republicans, and the Republicans will blame anyone but themselves.

This article was produced by Economy for All, a project of the Independent Media Institute.

Leonard C. Goodman is a Chicago criminal defense attorney and co-owner of the newly independent Reader.