One Dead After Car Plows Into Anti-Racist March

Above photo: White Nationalists charge into the counter-protesters, beating them with sticks, while throwing white smoke grenades. Photo: John Zanga

Charlottesville, VA – Anti-fascist and anti-racist counter-protestors confronted a planned white nationalist gathering in downtown Charlottesville on Saturday. Multiple angry clashes between groups in the morning resulted in many injuries.

Virginia Governor Terry McAuliffe declared a state of emergency and Virginia State Police moved in to end the protest. The Virginia National Guard was deployed and began patrolling Charlottesville.

But, in the early afternoon, a silver Challenger driving at high speed plowed through a march of anti-racist counter-protestors forming on 4th Street, tossing several people into the air like rag dolls before ramming into the rear end of another car. It appeared the car was driven deliberately into the crowd, then reversed and sped backwards.

One person (later identified as 32-year old Heather Heyer) was killed and 19 people were injured.

Jason Charter, a Washington DC activist, witnessed the car incident as he stood feet from it.  “I heard the car screeching and I turned and see it ramming people, throwing them on the windshield and into the air,” he said.  “I ran to help people and make sure they were ok and people were everywhere screaming medic.”

Charter said that moments after the car backed up, medics were on the scene helping the inured. He was shaken up by the incident.

As many as 30 right-wing groups, led by Alt-Right personality Richard Spencer and accompanied by known supremacist David Duke, rallied at Emancipation Park over city plans to remove a statue of Confederate General Robert E. Lee.

The clashes erupted almost from the start of the permitted protests, which began at 10 a.m. Elements from the KKK, Neo-Nazis and the Alt-Right, were met at every turn by about 1,000 counter-protesters. 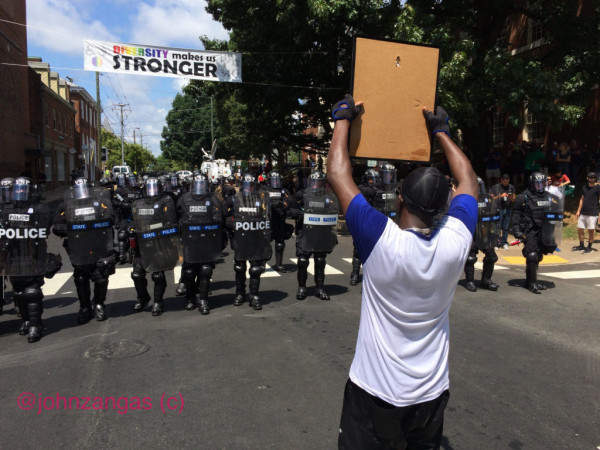 Police formed lines between two rows of barricades, separating Nationalists from counter-protesters. But for an unknown reason police pulled back as more Nationalists arrived, marching in a column down Market Street to confront Antifa. It was at this point that the confrontations saw their most bloody moments.

Citizen militias assembled, carrying automatic weapons from Virginia, West Virginia and as far away as New York, claiming they were there to form a buffer between sides.

White supremacists have descended on  Charlottesville since City Council voted to take down a statue of General Lee in an effort to remove Southern Heritage symbols of the Civil War. On Friday night, Neo-Nazis carried torches through the Grounds of the University of Virginia, chanting Nazi Germany slogan “Blood and Soil.” They attacked, beat and maced anti-racist protestors. Conflict also broke out when anti-fascists confronted White Nationalists at the Lee statue.

Update:  A police helicopter which had been monitoring the protests crashed following the dispersal.  Initial reports are that two died in the crash. 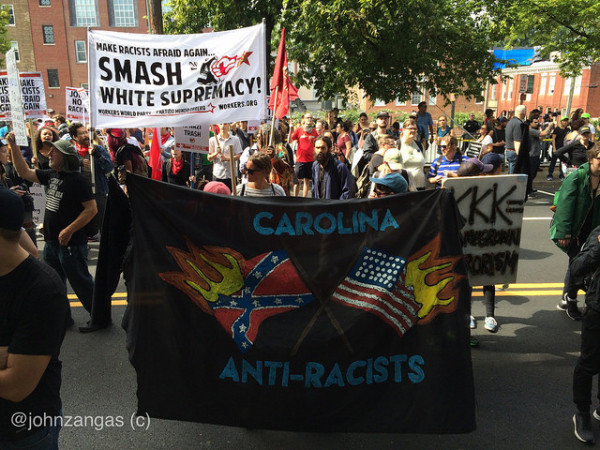 When you have every right you could possibly imagine. But black people don't like being killed by cops #Charlottesville pic.twitter.com/V3gZzO39dl

Call it what it is… #terrorism #Charlottesville pic.twitter.com/tGTRTAhEFn

This is not 1960. This is 2017. If you are SILENT you are COMPLICIT. #Charlottesville pic.twitter.com/EP5gmwuiDZ

We need to acknowledge past & present of our country's racist history in order for us to dismantle it.#DefendCville #Charlottesville pic.twitter.com/DeRNUaAutx

A lot of businesses in downtown Charlottesville with these signs. pic.twitter.com/fyebIpgqnF

Put it in perspective! #Charlottesville pic.twitter.com/JUUHOfEgyU

Trying to process what I saw in #Charlottesville today – pic.twitter.com/m6e8FmzHju