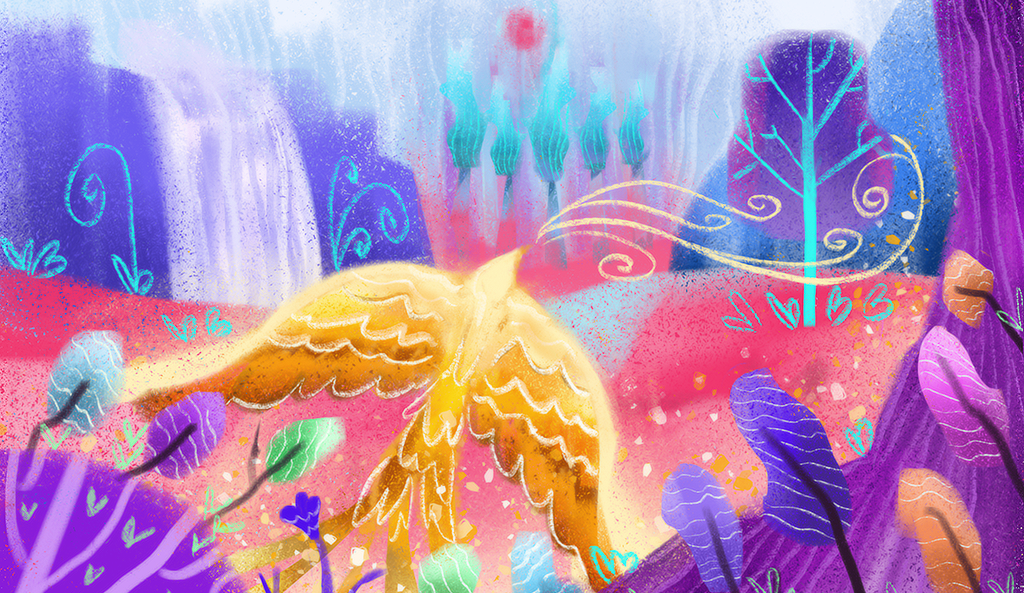 Above image: Original art for The Phoenix by Laila Arêde.

On Indigenous People’s Day, we should remember that returning stolen land is a necessary step towards climate justice.

The work of our time is both slow and fast, rapidly transforming human society in the short and long term simultaneously. That can’t happen without re-examining our relationships with each other and with every other living thing on the planet.

An honest one-sentence summary of the past 500 years is brutal reading: Tens of millions of Indigenous people around the world have been killed and forcibly removed from their lands in order to make rich and powerful white men even more rich and powerful. It’s still happening today. More than anything else, climate change is a consequence of capitalist expansion and imperialist aggression, particularly in the Americas.

In the context of the climate emergency, the decolonization movement is not about “saving” the Earth, it’s about repairing harm. It’s about justice.

If you think genocide was so long ago, it wasn’t. It’s still happening. Policies that kill our land and pollute our water and keep us sick and keep us poor.

Every day we survive is a celebration.

But we deserve so much more than survival.

Justice is justice, whether in the climate emergency or Indigenous rights

If there’s one thing that’s most important when doing climate work, it’s that justice always comes first. There is no meaningful separation between different kinds of justice. It’s all the same thing.

There’s no amount of climate benefit that, on its own, justifies repairing the hundreds of years of Indigenous genocide around the world. Indigenous sovereignty is valid even if we were not in a climate crisis. Indigenous futures are diverse, complex, and revolutionary, and are being actively erased. The climate emergency should be thought of as a symptom of this larger historical legacy of injustice, not an overarching technical problem to solve.

i have been told it's impolite to discuss how climate change is killing people https://t.co/waveJZJ8TA

In my book, The Future Earth, I have a long conversation with Kyle Whyte, a professor of environmental philosophy and ethics at Michigan State University and an enrolled member of the Citizen Potawatomi Nation, about the concept of a “kinship” relationship between human society and the natural world. Because, of course, all living things on Earth are part of the same living ecosystem. We depend on each other for not only survival, but for maintaining a lasting meaningful existence.

Here’s a short excerpt from our conversation in The Future Earth:

Whyte knows the realities of the past and the future are in many ways identical. He knows that his people have seen all this before, and he knows that if we aren’t able to reimagine our relationships with one another, unbound catastrophe will happen again.

“Indigenous people are already in the dystopia, at least according to our ancestors, because we have seen the undermining of all these relationships and we’ve already been through multiple forms of human-caused climate change just in the last two hundred years that are actually far worse than the dire twelve-year predictions. Our response is that we’re going to try to work on strengthening those critical relationships, trust, consent, accountability, reciprocity, among others,” he told me. “The way the Earth system works, we might not have enough time.”

But the worst thing we can do right now, according to Whyte, is panic. That’s counter to the messages that many environmentalists and climate campaigners are sending right now. The best climate response is what Whyte is doing: meeting person-to-person, talking about our differences and our shared dreams, and plotting a future together.

“Improving people’s behavior and improving the climate involves having all sorts of different types of relationship-building meetings and facilitative discussions and dialogue—that’s actually how you solve that problem,” he told me. “The legalistic aspects of it, the policy changes and new laws, that’s really just the most surface level of change.”

Last year, the Intergovernmental Panel on Climate Change – the world’s foremost group of climate scientists – found that Indigenous people manage lands in a way that significantly draws down carbon. Indigenous land management reduces the risk of climate breakdown to such an extent, the panel found, that it will be nearly impossible to meet the 1.5 degree Celsius goal without a hugely increased focus on Indigenous sovereignty. Even on strictly climate terms, upholding and strengthening Indigenous sovereignty is a non-negotiable.

And Indigenous sovereignty is right now at a crisis point. Being an Indigenous rights activist is dangerous. Each year, dozens of people are murdered for their environmental activism, and Indigenous activists are at particular risk. That doesn’t even factor in the thousands of Indigenous people who are displaced, threatened, and poisoned each year simply for existing.

Just 10% of the world’s land area is legally recognized as tribal under national laws, although ancestral and historical claims are much larger – closer to half the world’s land. That means there’s a lot of gray area for dispossession, encroachment, and theft. Restoring land to direct, legal Indigenous control is a just way to build a world that makes everyone’s lives better and begins to build a new era of human society focused on consent and reciprocity.

Meanwhile, dispossession of Indigenous people continues as an explicit strategy for fossil fuel companies and the governments that enable them. Just last week in Oklahoma, the Trump Administration’s Environmental Protection Agency granted permission for a wide range of regulatory control on tribal lands to the state that directly violates tribal authority.

Over the past 20 years, Indigenous people have increasingly asserted their authority and wisdom and as stewards of climate solutions rather than primarily as disproportionate victims of the climate emergency. Indigenous-managed lands account for about 20% of the world’s land area but preserve about 80% of the world’s biodiversity and marshal thousands of years of experience in adapting to climate variability and extreme weather. Increased recognition of Indigenous authority is the first step we can all take to building a more just and healthy planet.

(Here’s a toolkit for people who want to work on incorporating land reparation and Indigenous solidarity into your own lives.)

In the past few years, the Indigenous rights movement has gained increased visibility, but there’s still a very long way to go.

Acknowledging that much (or all) of our work and our lives takes place on stolen land is just the first step. Giving stolen land back to Indigenous people could be one of the most important ways of repairing the climate crisis. What that looks like in practical terms is very different around the world, but here are a few examples:

The collapse of whatever you want to call this system – capitalism, Western Civilization, white supremacy – isn’t bad news. Imagining life after it opens up a whole world of possibility that’s sidelined right now.

There are dozens more examples from around the world where Indigenous resistance to colonialism exists side-by-side with models of ways of life that can begin to transcend the growth-based extractive capitalism that has dominated much of the past 500 years. A better world is possible, and we already have all the leaders we need to make that world a reality.