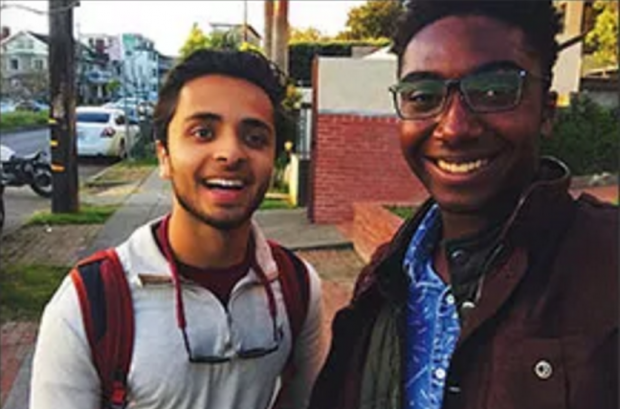 One Student’s Quest To Reshape Schools

Above Photo:Andrew Brennen visits with Akbar Khan, a student at the University of California, Berkeley. —Andrew Brennen

Andrew Brennen wants students to play a bigger role in their education.

As Andrew Brennen crisscrosses the country listening to high school students, he is trying to build a huge wave of sound: the sound of students raising their voices to make school better.
Brennen, 20, is on a national tour to engage 10,000 high school students in conversations designed to help them claim powerful roles in their education. The field director for the activist group Student Voice, Brennen has been catching buses and trains from city to city since February, often sleeping on friends’ couches, as he meets with teenagers in their schools to talk about what works there, and what doesn’t. He plans to keep doing it until December.
“The goal of our tour is to amplify and elevate all students’ voices, to shift their confidence about the role they can play in their schools,” he said in an interview from San Francisco.

He begins those discussions by asking students to tell him things about their school that adults don’t know. Typically, students start out with little to say, Brennen said. He walks them through the Student Bill of Rights, which Student Voice created to highlight key areas of school life that students can influence, from fair testing and use of technology to free expression, safety, and well-being. Bit by bit, conversation will build.
“By the end of the roundtable, when I ask them again what adults don’t know about their schools, they have so much to say they’re tripping over themselves,” Brennen said. “It’s because they’ve started learning to think critically about school.”
Brennen is building on activism skills he learned as a high school student in Kentucky, where he worked with the Prichard Committee for Academic Excellence to infuse state policy with student input. He later formed a student-voice team for the committee whose members, from middle school through college, have pushed state lawmakers for more education funds.
To help “create space” for student empowerment nationally, Brennen decided to take a year off from his communications and journalism studies at the University of North Carolina at Chapel Hill and work with Student Voice. Since its founding four years ago, Student Voice has been convening weekly #StuVoice Twitter chats to facilitate students sharing their experiences. It is supporting Brennen’s trip with grants and donations from foundations, corporations, and individuals.
Expanding the Movement
But the organization wanted to expand its connections with students, building them face to face, state to state, to reach more students. The White House heard about the plan to dispatch Brennen on a national tour and invited him to publicize it—and the need for a powerful student role in education—at a White House gathering on “next generation” high schools last November.