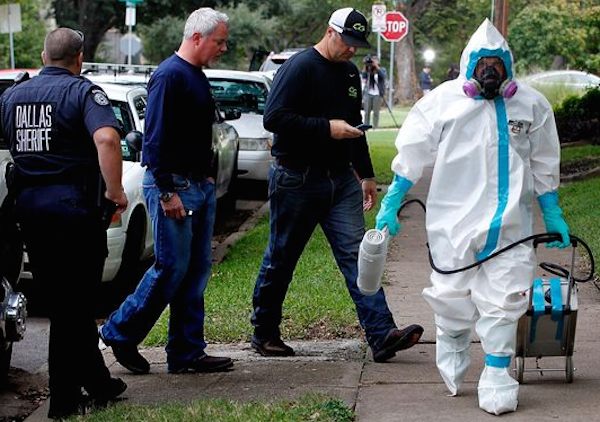 (TheAntiMedia) In a press release published by National Nurses United on October 3rd a survey of American nurses displayed only 20% of U.S. hospitals were prepared to handle an Ebola outbreak or an Ebola patient.

“Take immediate additional steps to ensure hospitals and healthcare providers nationwide are prepared to follow protocols should they encounter an Ebola patient.”

Mind you, this comes twelve days after Thomas E. Duncan tested positive for the Ebola virus in Dallas; four days after his death.

Mr. President, nearly two thousand nurses from hundreds of U.S. hospitals in 46 states expressed that only 1 in 5 U.S. hospitals are prepared for the Ebola virus. Why would it take you nine days to ensure hospitals nationwide are prepared to follow CDC protocol in handling an outbreak of this stature? Ebola is now a national security threat!

80% stated their hospital had NOT communicated any policy regarding potential admission of patients infected with Ebola.

87% admitted their  hospital had NOT provided education on Ebola, or the opportunity for nurses to interact and ask questions.

33% said their hospital did NOT have a sufficient supply of protection gear to care for an Ebola patient.

60% proclaimed their hospital did not have plans for isolation rooms if a patient tested positive for Ebola.

Remarkably, President Barack Obama stalled until the first American citizen contracted the Ebola virus within the United States before taking ‘immediate additional steps‘ to ensure preparedness. Will hospitals finally begin communicating CDC protocol to their nurses regarding admission of patients potentially infected with Ebola? In addition, will nurses be provided with education on Ebola, sufficient protective gear and sent instructions on creating an isolation room? Shouldn’t this have already been put into action several weeks ago?

“A health care worker at Texas Health Presbyterian Hospital who provided care for the Ebola patient hospitalized there has tested positive for Ebola in a preliminary test at the state public health laboratory in Austin,” said the Texas Department of State Health Services;  the test result was confirmed to be positive by the CDC.

Essentially we’ve got a certified and properly suited American nurse in Dallas who contracted Ebola within the United States . Unfortunately, everyone who  came in contact with Duncan as well as the nurse since showing symptoms of Ebola will have to be accounted for and monitored. What’s alarming many U.S.  health workers is although the nurse administering aid to the infected patient was dressed in the protective gear prescribed by the CDC, she still caught the virus. As with the nurse in Spain and the NBC news cameraman, she contracted the virus while wearing the proper protective gear. This looks like a trend when you consider there are hundreds of health workers already dead who also followed protocol while treating infected patients. Unfortunately Ebola continues to become a globe trotting sensation despite the current CDC protocol, proving there is a slew of flaws within the CDC’s procedures and an infectious quarry of questions yet to be answered regarding this vicious virus.

If you’d like to learn more about what the CDC and other experts know about Ebola transmission, please read the following article. (CDC Admits Ebola Could Be Airborne)