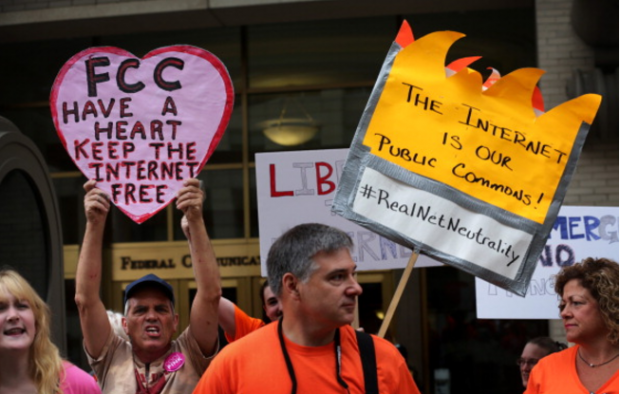 Above Photo: Hundreds of activists, allies and volunteers rallied for net neutrality in Los Angeles on July 23, 2014. (Flickr/Free Press)

For many on the left, the string of appointments that have made up the president’s new administration have been discussed as a horror show. While many have been sent reeling by major appointments like Jeff Sessions and Steve Bannon, they are eclipsing others that could have significant policy effects.

Trump’s selection of Mark Jamison, a former lobbyist for the telecomm giant Sprint, and Jeffrey Eisenach, a consultant for Verizon, to the Federal Communications Commission has made many advocates of “net neutrality” nervous. The fear is that they may represent the interests of telecommunications companies, which have a vested interest in going after the “open Internet.” As FCC chairman Tom Wheeler stepped down and Ajit Pai — a high-ranking Republican and a fierce critic of the net neutrality rule — replaced him, the rules that cemented net neutrality into current policy are likely to be threatened. This move has put the issue of net neutrality back on the forefront of social discussions, and with any changes to the current policies there could be a catastrophic shift in the culture of media and e-commerce.

Both detractors and advocates of net neutrality often note that we currently live in the “wild west” of the Internet. While major media and commercial corporations dominate traffic on the web, someone with an idea and a little web ingenuity can create a website that has equal access to users as major platforms like Google or Amazon. No website is privileged in access and the only difference in the speed of load times or the quality of service comes from the website themselves, not the Internet Service Providers, or ISPs. In many countries that have more restrictions on speech and information, ISPs in a given area can limit access to certain sites and search topics, or just allow certain websites to load more quickly.

Without net neutrality rules, which are a set of regulations that require ISPs to treat all websites the same, ISPs could create a paid “fast lane” for some websites that would allow them to have much faster load times and easier access. In a number of recent studies, these load times mean everything for websites struggling to compete. Milliseconds can change a purchasing decision from one company to a competitor and has a special effect on the use of video and streaming audio, where even a small reduction in speed makes load times unbearable.

If load speeds could essentially be purchased through an ISP determined “fast lane,” then this could create a strong barrier to entry for small start-ups, new online retailers, and alternative and independent media sources. This could also have a devastating effect on American commerce, as the platforms would be stacked heavily in favor of massive companies — thereby lowering the opportunities for small businesses, which are still the largest type of employer in the country.

For journalists, this could lead to the shuddering of more news websites that will not be able to compete with these new rules. Meanwhile, the voices involved in civic discourse will further centralize into communications mega-corporations.

While companies like Google and Netflix have voiced opposition to this, they may end up getting in line with the new rules as a matter of business, essentially setting a tone of acceptance for the rest of the web.

As a new Republican administration gets comfortable in Washington, the issue of net neutrality is being newly politicized. Trump himself has tweeted that net neutrality is a top-down “power grab,” a talking point that critics argue is disconnected from the actual issue. The further politicization of this issue comes, in large part, from the heavy lobbying that telecommunications companies like AT&T, Verizon and Comcast have been conducting, amplifying the already dominant voices of communications mega-corporations that see net neutrality as meddling regulation.

While the money being thrown around by the telecommunications industry has been deafening, open Internet advocacy organizations are relying on the power of mass support to be the critical weapon. When the Stop Internet Privacy Act, or SOPA, was being debated, the entire country revolted. Many major Internet-based companies voiced their horror at the legislation — which would have increased the ability of law enforcement to go after digital file sharing — and participated in the American Censorship Day, a coalition effort of organizations and companies protesting against government intrusion into web access.

The Electronic Frontier Foundation, or EFF, an advocacy organization known for defending consumers and developers against government overreach in the digital landscape, was one of the organizations leading this charge. On January 18, 2012, some 75,000 websites went completely black in an effort to bring the Internet to a complete standstill. This bold action was heard clearly in Washington and resulted in those censorship bills being scrapped. As net neutrality heads back into Washington’s crosshairs, the EFF is again taking a lead in confronting this possibility head on.

“[Abandoning net neutrality] would distort what we are used to, which is an open platform where we can go anywhere to something that looks more like cable television,” said Ernesto Falcon, legislative council for the EFF.

Right now the FCC is the primary body where these rules could get changed, and it is this point that the EFF is staying focused on. This starts by making sure the voice of the people is sent directly to the FCC if those decisions begin to be reconsidered, making sure that the arguments made by the telecom industry are not considered without a challenge.

“Our effort is mainly to get the word out,” Falcon said. “There were millions of people who already wrote to the FCC in favor of net neutrality… If politicians think that people want their Internet run by cable companies, they have another thing coming.”

Their approach relies on the public commenting period that the FCC rules require. The EFF can then organize to flood the FCC with oppositional messages so that those voices in favor of Internet restriction will appear minuscule. If the net neutrality rules are then successfully repealed, the EFF will shift back into its legal role, challenging the FCC’s decisions in the courts.

They have used this tactic to great effect before. After an action called “Occupy the FCC” began in May of 2014, which was a public encampment of multiple tents in front of the commission, the FCC’s website was flooded by 3.7 million public comments supporting net neutrality. This voice of concern did not happen in a vacuum, as the Center for Media Justice organized a coalition of over a hundred organizations from a variety of backgrounds to confront the FCC and treat net neutrality as a social justice issue with an intersectional analysis. Rallies and protests targeting Comcast and Verizon were held across the country, uniting grassroots action with concerted and focused messaging about what was at stake if the Internet was consolidated by massive telecomm companies. This multifaceted campaign pushed Wheeler to establish the rules.

While the EFF has been fighting for digital rights for years, the enigmatic Fight for the Future project may be the best-known organization confronting the issue of net neutrality specifically. Starting in 2011, they created a model that uses tech tools to expand the voices of activists confronting encroachments on digital freedom. Not only were they key organizers in the world’s largest digital protest around the SOPA, they were instrumental in having the net neutrality rules passed in the first place after they organized four million people to contact the FCC.

“[The] economic effects are huge,” said Holmes Wilson, the co-director and co-founder of Fight for the Future. “If we lose net neutrality entire businesses will never happen.”

Like the EFF, Fight for the Future is starting the battle at the FCC, since they see it as easier to challenge that body than confront Congress. “If we lose at the FCC, a new FCC can fix it. If we lose at Congress, every future FCC has their hands tied,” Holmes said.

Legislation coming out of Congress would have a much more lasting effect on the issue, so if the FCC repeals net neutrality it would be much easier to correct than some type of binding legislation. Fight for the Future will be organizing a large contingent of stake-holders to contact senators and congress people who may have wavered on their commitment to an open Internet, focusing heavily on tech workers, small business owners, digital activists and those who would be intimately affected by a change in Internet oversight.

This effort entails connecting with local groups to pressure legislators at a regional level, focusing on specific districts at a time. They are relying on an information campaign that will explain an issue that is rarely discussed and has been subject to misinformation and misunderstanding from large segments of the country.

The challenge for both organizations, and an increasing number of tech companies, journalists, and Internet advocates will be to replicate the success that earlier digital campaigns had. As Trump sets priorities for his new administration, telecommunications companies are continuing to flood money in to shift FCC policy to favor the largest media companies, putting an entire generation of Internet users at risk. While Trump has promised to pass through a number of controversial policies, organizations like the EFF and Fight for the Future are going to have to continue their public information campaign to explain why the issue of net neutrality is increasingly relevant.

The argument that telecommunications companies are now trying to make is that these regulations are prohibiting the expansion of high-speed Internet, and this strategy may have traction in an FCC built on the corporate-friendly attitude of the new president. Whether or not these types of counter-arguments are able to sway decisions will depend on how effectively these open Internet advocates are able to mobilize people, and to demonstrate how seemingly complex rules covering technology have intimate effects on the lives of everyday people.