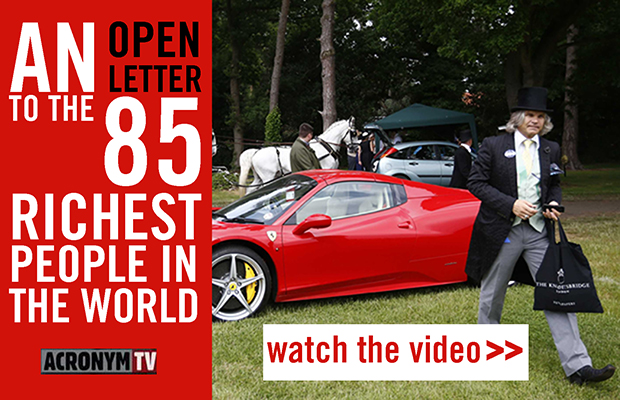 Video: Open Letter To 85 Richest People On The Planet

Responding to the Oxfam report that concluded that the world’s 85 richest people own the same amount as the bottom half of the entire global population, self appointed spokesperson for the global elite, and celebrity Judge on the reality show The Shark Tank Kevin O’Leary,applauded the news, stating that is  “fantastic news (…) the motivation everybody needs (…) it inspires everyone to want to be like the 1%” and scoffing at the idea of “re-distribution of wealth” stated, “ I celebrate Capitalism.”

His remarks inspire this open letter to the 85 Richest People In The World.

Dear 85 Richest People In The World,

Thank you for your time.

I’m well aware that time, in your world, is money. Given that one member of your peer group, Warren Buffett, made $37 million per day in 2013, breaking down to a mind blowing $1.5 million an hour, I image the value of the 5 minutes or so you are granting me now, depending on where you rank in your elite group of 85, is somewhere in the neighborhood of $100,000.

So thank you. It means a lot.

We know that some of Mr. Buffett’s public statement’s show the possibility for a worldview, even among the rarefied air of your little 85 club, can be a little more compassionate and nuanced that the remarks of Mr. O’Leary.

Mr. O’Leary dismisses the notion of wealth redistribution. Here in the United States, we live in one of the most unequal countries in the world, when measured in terms of wealth inequity. Are we to believe that this well documented and growing wealth divide is a random force of nature? A statistical glitch? Because you deserve it? Or is it possible, that billionaire Stanley Druckenmiller had it right in a television interview called the Federal Reserve’s quantitative easing program:

“[T]he biggest redistribution of wealth from the middle class and the poor to the rich ever. … I mean, maybe this trickle-down monetary policy that gives money to billionaires and hopefully we go spend it is going to work. But it hasn’t worked for five years.”

Given this, help me understand how the global elite differs from pirates?

Kevin O’Leary sells us the lie that if we all just fight hard to get up to the top, we could be in your little club. Is it really your opinion that you all really work harder than the rest of us in a manner quantifiable to the skewed amount of wealth you have amassed? Can Mark Zuckerberg, or Sergei Brin any one of the Walton’s work much harder than an 11 year old kid who work 14 hour shifts in some rat infested tin shed of a factory in Bangladesh making the clothes that find their way onto the backs of every 11 year old American kid who wants to grow up to be the next Zuckerberg? You clearly cannot answer yes in good conscience. The system that requires millions of poor people working 70 hours a week to feed the fire of constant economic growth is, for this reason and scores more, not only unfair, but morally unjustifiable.

The furnace that feeds the global Corporate capitalist system is also, I think you might have heard, heating up the planet. The human species, according to 98% of climate scientists are in dire straights. Imagine yourself strapped to a conveyor belt moving slowly towards a giant band saw, while the forces of darkness are shoving cyanide coated in fruit flavored mentos down your throat and chasing it with diet coke. You see, capitalism and carbon dioxide are a lot like mentos and diet coke. The main difference is that the latter gives you viral videos; the former is accelerating the extinction of the human species.

Fear not, you notorious 85, though you are now recognized for the pirates that you are, no one I know is demanding that you walk the plank. What we do demand, however, is a system that is sustainable, and equitable that does in fact re-distribute much of the wealth you have stolen from us.

I look forward to you response. You can reach me on twitter.