On the 13th of October, opponents of Transcanada’s Potomac Pipeline and of the toxic Rockwool plant being build across from a school in W Va held the second “Hands Across the Potomac” event on the bridge from Shepherdstown, W Va to MD. TransCanada subsidiary Columbia Gas lost their first attempt at Federal eminent domain of MD parkland to build this pipeline but has appealed to the 4th Circuit.

They may not do well there, as the 4th Circuit is the same court that vacated permits for the Atlantic Coast Pipeline back in June 2019. That case though is going to Kavanaugh’s Supreme Court so it is not over, nor is the fight against the Potomac Pipeline over.

On the road to Shepherdstown in W Va, anti-Rockwool signs could be seen everywhere. Rockwool is the foreign multinational corporation building a fiberglass insulation plant that would burn massive amounts of coal and fracked gas if it ever opens right across from a school in W Va. The project is very unpopular in spite of W Va’s weak economy due to the pollution that would spew from its stacks.

This was the second Hands Across the Potomac event, the first was on Oct 14, 2017 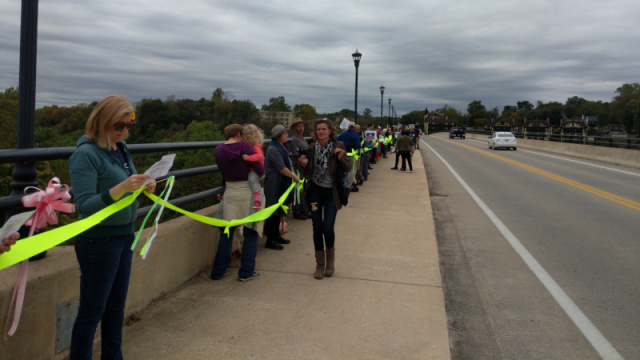