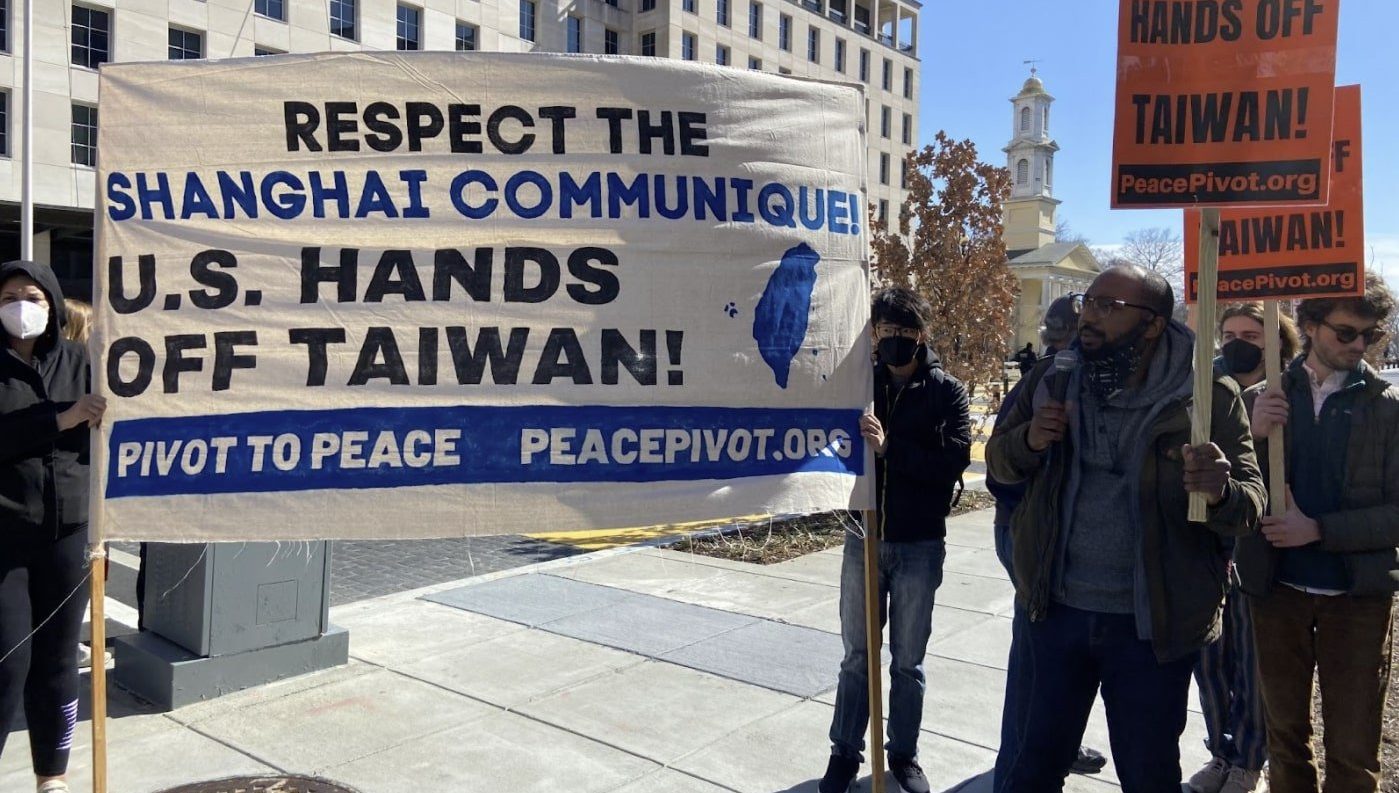 Above photo: Pivot to Peace and ANSWER Coalition members on Feb. 27. Liberation photo.

Sign the petition to demand that our representatives vote NO on the dangerous and provocative Taiwan Policy Act. If passed, the U.S. government will send $6.5 billion dollars on weapons and military aid to Taiwan. It would explicitly refer to Taiwan as its own government, directly violating the U.S. -China joint Shanghai Communique of the One-China policy, in which Taiwan is a part of China. Stand with Pivot to Peace to say no to war and no to the dangerous and provocative Taiwan Policy Act now!

On September 14, the US Senate Foreign Relations Committee approved the Taiwan Policy Act of 2022. For the past half-century the US policy towards China is the One China Policy whereby the US recognizes the People’s Republic of China (PRC) as the only legitimate government of China, and that Taiwan is part of China. If enacted as law, the landmark act would mark a radical shift away from the US One China policy that forms the bedrock of relations with Beijing since the 1980s. It will also upset the post WWII order set up by the Cairo and Potsdam Declarations that returned Taiwan to China, irrespective of the form of government of China. The US will, by this law, stick out as the only major country of the world that recognizes Taiwan as a nation independent of the People’s Republic of China.

There will be, under the Act, extensive US involvement in the government and the military of Taiwan, to the extent that US government employees will be embedded in the Taiwan government for the next 5 years, to help determine and implement a wide range of Taiwan’s policies. These policies address fine details in recruitment and skills training for Taiwan’s defense and civilian sectors and strategic stockpiling of resources. All in a mobilization of all of Taiwan’s resources against the PRC.

The Act provides Taiwan with massive military aid, and seeks to establish interoperability between the US and Taiwanese militaries in the form of Joint US-Taiwan contingency tabletop exercises and war games against the PRC.

To China, Taiwan is the result of an unfinished civil war, that China intends to finish by reuniting with the island at any cost. By enacting the Act, we and Taiwan will be on a collision course with China.

We must then ask: why are we doing this? When we are so intimately involved in Taiwan, it will be difficult to dissociate ourselves from any future conflict between Taiwan and the PRC. Any military conflict between the PRC and Taiwan threatens not only to engulf the whole east Asia region but also the US itself. It will be difficult to draw the line. Are we ready for a military conflict with another nuclear power?

Our country has been ravaged by inflation, and we are seriously looking at a possible recession. All this is happening while COVID is still taking its toll on the American people. Our representatives should be looking out for our best interest. Shouldn’t we be more concerned about our own well-being than that of an island across the ocean that most Americans cannot even find on a map?

We have been engaged in enough wars. Let’s try not to get involved with another one. Vote NO to the provocative and dangerous Taiwan Policy Act of 2022 now!