Opposition To Drilling Elevated To An Art Form

He suspects he made himself as well known to industry as art markets with novel but effective methods of peaceful resistance.

Von Tiesenhausen has kept wells, compressors and pipelines off his three square kilometres of fields and trees — a notable feat for his location that has attracted quiet visits from pillars of corporate Alberta.

The spread von Tiesenhausen inherited from his parents, a former family farm 80 kilometres west of Grande Prairie, sits atop a natural gas hot spot known as the “deep basin.” Industry has been in aggressive growth mode in the area since Calgarian Jim Gray’s Canadian Hunter Exploration (now part of Burlington Resources, soon to merge with ConocoPhillips) discovered rich geological formations in the early 1970s.

Only 13 kilometres away, the artist’s neighbours include Wiebo Ludwig and his Trickle Creek religious colony, the central figures in a nationally notorious 1990s case of alleged violent resistance against tapping “sour” gas laced with hazardous hydrogen-sulphide.

“I don’t condone him at all,” von Tiesenhausen said in an interview as Edmonton’s Vanderleelie Gallery opened a show of works that have earned him a national and international following.

The artist’s peaceful method of fending off gas production is a basic right as well established in his field – copyright – as the legal underpinnings of Alberta’s energy industry.

He accepts that he only owns the surface of his land. The buried treasure belongs to the provincial government. It has rights to sell the resources and make him let companies onto his property to extract them, so long as he is compensated for the disturbance.

Von Tiesenhausen also accepts that government and industry will enforce their rights in firm belief – supported by courts and regulatory agencies — that they represent collective good which outweighs inconvenience to individuals. 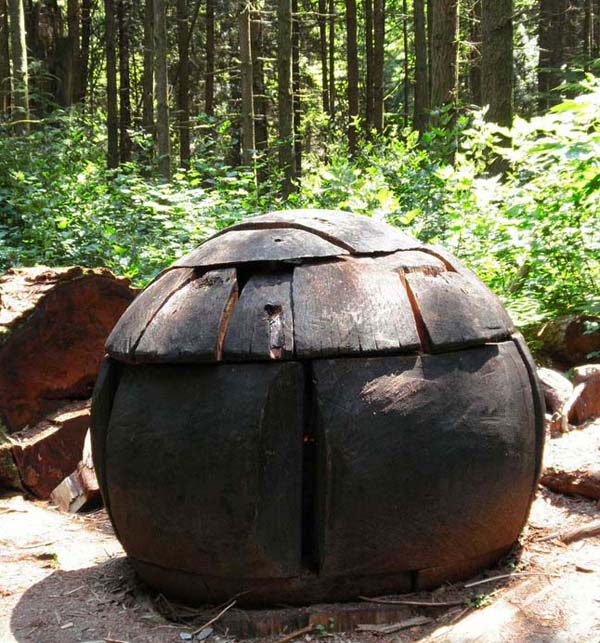 He learned industrial realities in 14 years as a heavy equipment operator before he turned professional artist in 1990. He worked on oilfield well sites and construction projects from northern Alberta to Antarctica, disrupting natural features from forests to penguin colonies.

“I’ve cut down thousands of trees with bulldozers,” he confessed, adding, “It never felt right, that abuse of the land.

“I realized it was not sustainable. Now I paint.”

As an income source “it’s not nearly what cat-skinning (Caterpillar equipment operating) was, but it’s not something I would ever trade back. There’s no way I’m going back.”

To fortify his changed livelihood on his family legacy, he has copyrighted his spread as a work of art. The action mimics strong legal foundations of pharmaceutical, computer software and publishing corporations, he pointed out.

Around his home and studio, his property is studded with artwork such as a 33-metre-long ship sculpted with willow stalks, winter ice forms, nest-like structures in trees, statuesque towers and a “lifeline” or visual autobiography composed as a white picket fence built in annual sections left to weather naturally.

His legal move vastly increased the amount of compensation he is potentially entitled to demand from any oil or pipeline company wanting access to his place, because changing his property would be copyright infringement.

Lawsuits have been threatened several times, but no oil and gas companies have risked a winner-take-all court case that would attract public attention and start other landowners thinking.

Making the copyright claim stick has been a moral boost for the artist and his family. “It gave us the confidence to say this is as legitimate an undertaking as the industry.

Von Tiesenhausen emphasizes his message in the language of corporations — money. Taking a page from the books of business consultants, he demands $500 an hour from companies that want to take up his time talking to him about his land. “I demand $500 an hour. They pay. It keeps the meetings really short and they don’t do it nearly as often as they used to,” the artist said.

“I meet presidents of oil companies. I show them I’m a guy trying to make a go of something that’s honest and valid. It’s what they understand.” 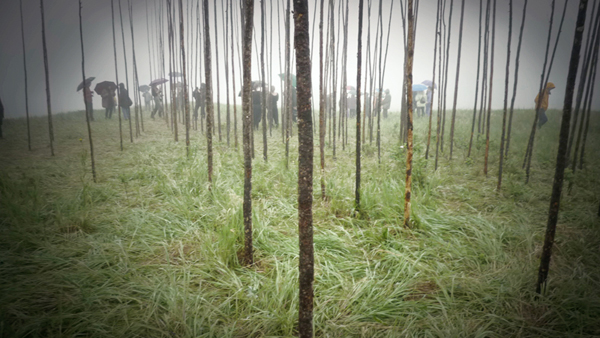 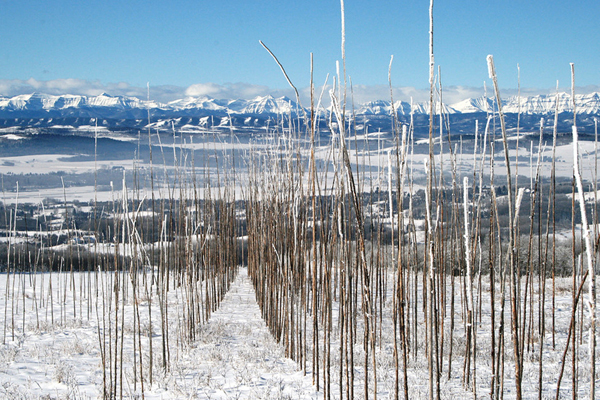 The title of this exhibition draws from Donald Judd’s idea of an integrated utopia, where art, architecture, and place come together. For Judd, art could only be realized in an ideal location, and as such could only be experienced in this “precisely sublime” setting – an environmental, social, and political model that seems apt for Peter von Tiesenhausen.

Although there is little in common between Judd’s ideal setting of Marfa, Texas and von Tiesenhausen’s home of Demmitt, Alberta, what can be said is that both are remote, both have landscapes that captivate, and both allow for an interconnection between art and life – where the line between living and working dissolves. In the case of Judd, he escaped New York to find this place, for von Tiesenhausen, he never left it.

Von Tiesenhausen’s respect for his land is indisputable. In 1995 he independently copyrighted his property as a work of art: a last defense against a proposed pipeline that would have run through his property, a defiant act that in hindsight was a gamble that paid off. As an ongoing artwork, all 800 acres are protected; any change made to the land constitutes a copyright infringement. Politics aside, this perfectly illustrates the artist’s commitment to a life and practice that is holistic. Von Tiesenhausen does not set out to make art for his land; his daily rituals of living on this land makes the art: walking a path repeatedly, carving an eye in a tree, or adding another 8 feet of white picket to a fence he has continued to build for the last 24 years.

The works in this exhibition represent a shift from a state of harmony with nature to an examination of materials that reflects our problematic relation to them. A wall made from left-over pine beetle wood from the Demmitt community centre, a cube of reclaimed toxic MDF destroyed by water, an enormous ball of aluminum power line, a city made from the angry cuts of a skill saw, a table of seemingly useless objects displayed as museum artifacts – are these materials in process, finished works of art, or just waste? Each piece speaks to its own history of production: trees are trees, but they are also wood, pulp, sawdust, paper, and ash.

The easy way into von Tiesenhausen’s work is to label it “land art”. It is true the marks he makes on his land are subtle and the sculptures he builds are made of the stuff he finds around him, but to limit a definition of his practice would miss a more complicated reading. For years he considered himself an outsider, never accepted into the inner circles of the urban elite, yet this rural isolation has given him a cradle-to-grave vision now focused on the ethics of material use in urban development and suburban sprawl. In past work there was a focus on materials subtly referencing their natural state, but now the work examines the dirty end of this relationship – our production, consumption, and waste of material derived from nature. 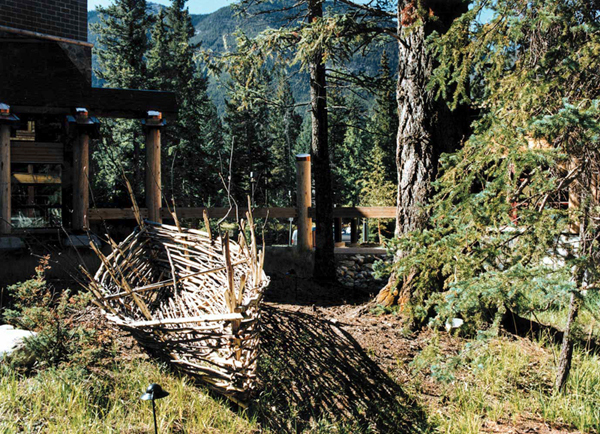 Some of his art is created just by him living his life on his farm. The fence he has been building for 24 years, where the end he is working on is new and the other end is rotting away, takes a simple task many of us have done and attachs a sense of human history, meditation and inevitability of change to the task. For Peter being present in the place where he is makes the art.

Peter…has done a brilliant job of showing how art, nature, everyday human activity, time and spirituality can all be part of a meaningful ongoing daily process of worship.

Peter’s work matters to me so much because it has liberated me from the sterile world of the art gallery and opened my mind to a concept of art that is directly tied to my soul and the world I live in. – From the Illahie blog, “Why the art of Peter von Tiesenhausen matters to me” 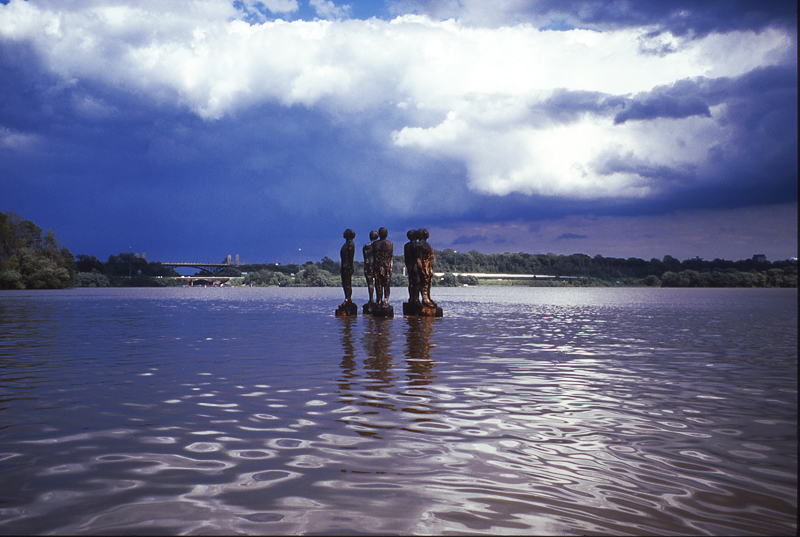