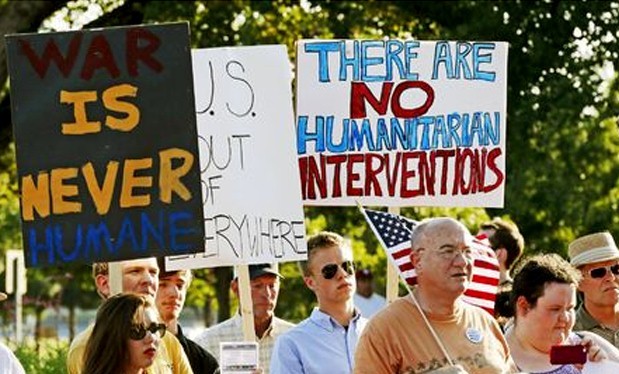 Above photo: People listen to speakers during a rally against the United States’ involvement in the Syria war, on the south side of state Capitol in Oklahoma City, Friday, July 12, 2013. – See more at: http://en.alalam.ir/news/1494780#sthash.kilk2iYF.dpuf

OKLAHOMA CITY – Oklahoma activists opposed to U.S. intervention in the Syrian civil war in recent days have intensified their campaign.

Led by two well-known and respected military veterans, a coalition has formed that is characterized as “tea party to socialist to anarchist.”

Truth is, the Sooner State’s anti-war movement is so diverse it does not fit any political template.

At least one prominent “flaming moderate” has stepped to the forefront of the anti-intervention coalition as a broad swath of Oklahomans plead with the state’s conservative Republican congressional delegation to oppose a resolution authorizing President Barack Obama to use force. Further, dozens of conservative activists have become active in the anti-war movement.

State Rep. Paul Wesselhoft, R-Oklahoma City, a veteran military chaplain, will hold a noon hour news conference Thursday at the state Capitol. He will be joined by Nathaniel Batchelder, founder and president of The Peace House in Oklahoma City and a Vietnam veteran.

In recent weeks, the coalition called “Syria: Not Our War” has held regular rallies adjacent to the city’s busiest shopping mall, attracting supportive car honks and a steady stream of volunteers holding American flags and signs opposed to intervention. Wesselhoft and Batchelder collaborated on a widely covered Capitol rally in July.

While Wesselhoft is an ardent multi-issue conservative, Batchelder is a reliable barometer of sentiments among the capital city’s progressive wing. In a joint commentary on Syria, the pair agreed that money to support military action would, in this case, be better focused on domestic needs.

“Domestic needs here in the U.S. cry for financial support, but our treasury is depleted by war. Our military and ‘We the People’ are exhausted by war. It is time to invest our efforts at home, in an economy that supports justice and lifts all boats,” they wrote.

Williams and Wesselhoft, who often disagree in legislative debates, are passionately allied in the anti-intervention cause. Williams told one rally he is saddened to disagree with an Obama administration policy, but reiterated his concern about the national government’s present approach.

During the July rally at which he was a keynote speaker, Odom told Oklahoma Watchdog, “The crowd and speakers were the most interesting mix I have ever seen at an Oklahoma political event. Most were from the libertarian GOP, or the pacifist left of the Dems. I was the ‘flaming moderate’ of the bunch, and simply made the point that of the possible scenarios, three out of four do not result in a positive for the USA – and the fourth is the least likely result. I am not a pacifist or an isolationist, this is simply a bad idea for us at this time.”

This week, at town hall meetings throughout the state’s Fourth Congressional District, U.S. Rep. Tom Cole, R-Moore, has been heavily applauded when declaring his opposition to the resolution authorizing military force to punish the Syrian government for reportedly using chemical weapons in recent battles.

In a Wednesday statement to Oklahoma Watchdog, U.S. Rep. James Lankford, R-Oklahoma City, said, “I will review the classified materials in Washington, D.C., but from what I have heard to date, the proposal on the table does not achieve our larger goal in the Middle East of stability or a reduction of chemical weapon threats.”

“A limited missile strike will only weaken our hand in the Middle East when Assad claims a year from now that he beat the rebels and the Americans,” Lankford said. “We must continue to engage diplomatically and with our allies to ensure our strategic goals in the region remain achievable.”

The groups working together against American intervention in Syria are unlikely to sit down and sing “Kumbaya” after the debate is over. Still, the depth and passion of their cooperation is both notable and memorable, providing images of unity that have become rare in Oklahoma politics.