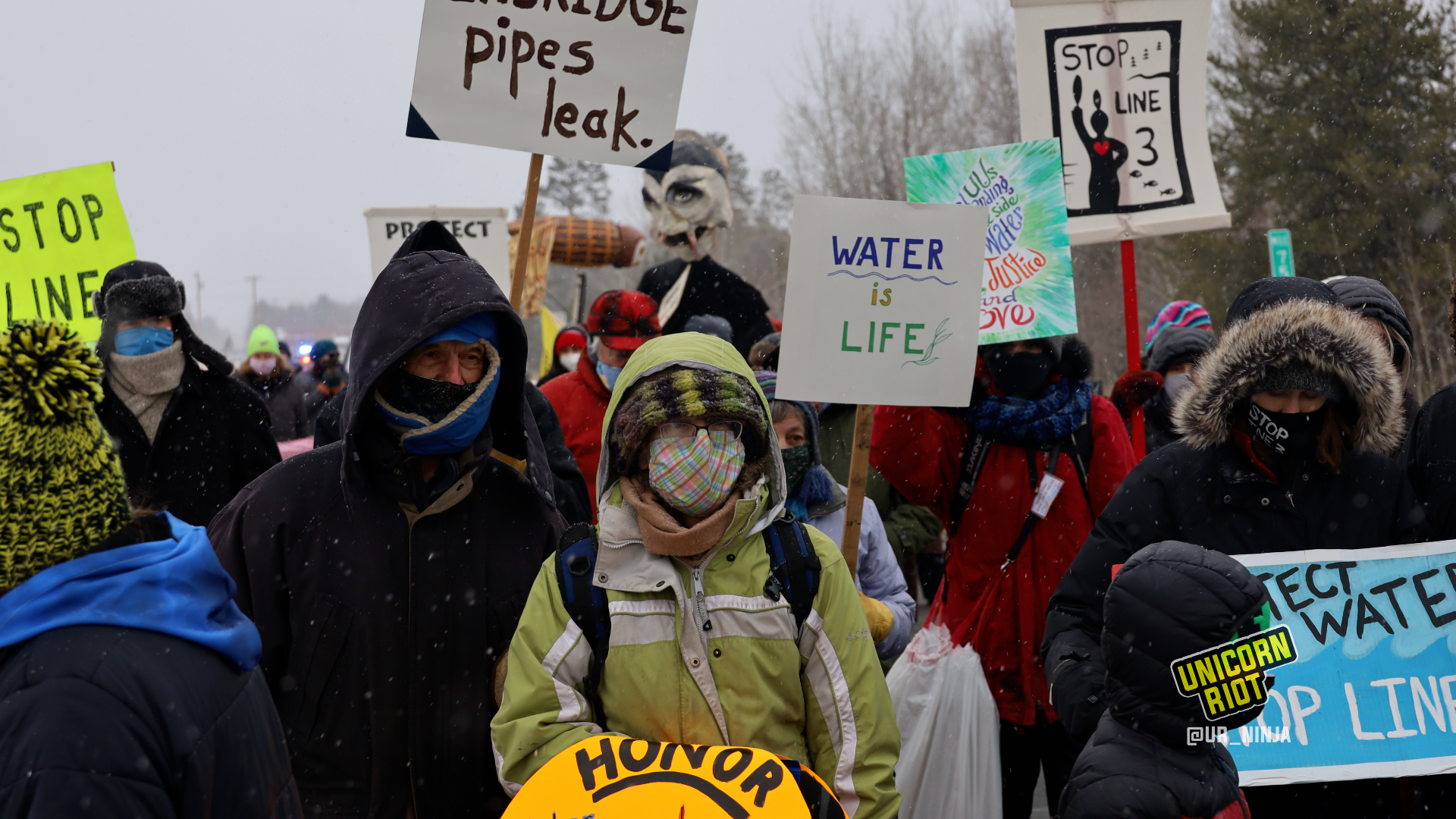 Also today – An Appeals Court in Minnesota denied a request by the Red Lake Band of Chippewa and White Earth Band of Ojibwe to stop construction of #Line3. https://t.co/1rWgT1ecGk

Saint Paul, MN – Around 600 people gathered in St. Paul, Minnesota, on January 29, calling on President Biden to revoke permits for the Line 3 tar sands oil pipeline project. The protest billed as ‘Protect the Water, Revoke the Permits‘ started at Kellogg Park and marched into downtown to the local Army Corps of Engineers’ office to demand federal water crossing permits be rescinded.

Direct actions halting construction of the new pipeline continue to take place as opposition Line 3 grows. Friday morning in Northern Minnesota, two water protectors locked down to each other between three concrete barrels blocking the road to a Line 3 construction site.

This morning in Northern Minnesota, two water protectors locked down to one another between barrels of concrete on a road leading to a #Line3 construction work site.

In a press release by the Giniw Collective, the site of the blockade protest action was described as “a few miles south from a massive new Line 3 pump station through a wetland” and “also near the proposed Line 3 crossing through the Mississippi Headwaters. The Giniw Collective’s statement added that “active preparation of that site and dozens of others continue across Anishinaabe treaty territory, as tribal lawsuits have yet to be heard.“

Line 3 requires nearly the equivalent to all of Minnesota’s nuclear power to send its tar sands sludge through Minnesota’s rivers, wetlands, and wild rice water bodies on its way to Lake Superior.

Water Protector Lauren Berube said, “We need everyone doing everything and together we will stop Line 3.”

Line 3 is an already existing crude oil pipeline, which transports a particularly dangerous type of oil called tar sands from Alberta, Canada to refineries in Superior, Wisconsin. Owned and operated by Canadian energy company Enbridge, the pipeline was originally built in 1968, running from Edmonton through North Dakota and Minnesota to Superior and has been the source of numerous oil spills. In 1991, Line 3 ruptured and spilled over 1.7 million gallons of oil in the largest inland oil spill in U.S. history.

“I think often people believe that if we’re going to protect Mother Earth that means we don’t care about jobs. The reality is we still very much care about jobs, just not jobs that are affecting us so negatively,”

“[The growing involvement by legislators] represents a shift in the way that we’re thinking about the climate crisis and the way we’re thinking about energy. Climate scientists have told us we have 10 years — 10 years to remake our systems to create a clean energy-based economy. If we want to have a livable planet for our future and the generations to come, we simply cannot build new fossil fuel infrastructure. That ship has sailed. Most people understand this. The only reason the Line 3 expansion is moving forward is because a small group of powerful, wealthy interests wants to cash in before the fossil fuel industry tanks.”

The pipeline project has faced numerous obstacles over the last few months. Actions to halt construction have persisted. A lawsuit was filed by the Red Lake Band of Chippewa, the White Earth Band of Ojibwe, Sierra Club, Honor the Earth, and Friends of the Headwaters to stop the pipeline. Last month, construction was paused for a few hours in an area of Northern Minnesota when a worker died after being run over with a forklift at a Line 3 work site.

After Biden took office and revoked the Keystone XL pipeline permits, many are hoping he may do the same with Line 3, while others are staying active in the fight to stop construction on the ground.