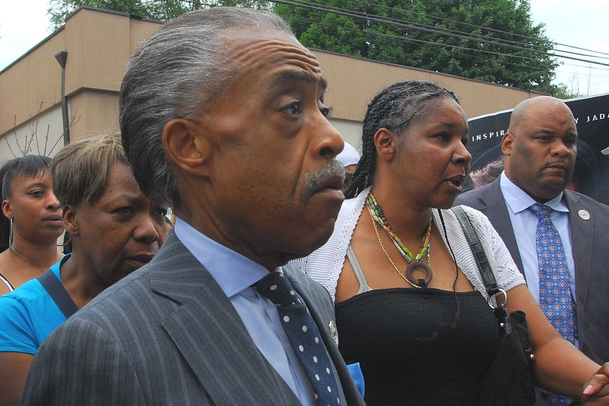 Reverend Al Sharpton with Esaw Garner, widow of Eric Garner, at a protest in the Staten Island neighborhood where Eric Garner died while in police custody. Photo: Thomas Good via Wikimedia Commons.

Al Sharpton and Oprah Winfrey are scared witless that the Black Lives Matter mobilization will become a sustained, independent political movement – one that challenges both the rich white rulers and their junior partners in the Black Misleadership Class. The viciousness of Winfrey’s and Sharpton’s assaults on the new crop of organizers is a good barometer of the nascent movement’s effectiveness, to date, in discomforting the comfortable. If one thing is clear to African American youth, it is that so-called Black leadership has been complicit in the catastrophe that has engulfed their communities – that the “leaders” are part of the problem, not the solution. Therefore, although the movement-in-the-making is not yet large and coherent enough to shake the foundations of the State or cause Wall Street to shudder, it has already created a crisis of legitimacy for the Black Misleadership Class.

Sharpton’s and Winfrey’s defense is to infantilize the young activists, to deflect the implicit indictment of what currently passes for Black leadership by framing the conflict as generational, rather than substantive. Sharpton launched into a panicked rant at a recent meeting of his National Action Network, in Harlem: “Anytime you have movements, whether it’s in Ferguson, whether it’s in New York, whether it’s in Denver, wherever it is, when they got you more angry at your parents then they got you at the vote you’re supposed to be out there for, you’re being tricked and you’re trying to turn the community into tricks. And they are pimping you, to do the Willie Lynch in our community,” said one of the most accomplished whores in Black American history.

Al Sharpton, a highly ecumenical prostitute who has serviced clients ranging from the most rightwing, down-and-dirty Republicans (Roger Stone, 2003-04); to plutocrats from Hell (Michael Bloomberg); to his current (but now endangered) hookup as the snitching King Rat and activism-deflator for a corporate Democratic president; a man who has lain down with whole kennels of flee-bitten dogs, now defames as “tricks” the young people who stood up to militarized police and dared to make grassroots politics a reality in 21st century America.

“Although the movement-in-the-making is not yet large and coherent enough to shake the foundations of the State or cause Wall Street to shudder, it has already created a crisis of legitimacy for the Black Misleadership Class.”

The jackleg preacher with the signature pimp-adour hairstyle – whose self-proclaimed heroes are not MLK or Malcolm X, but sports gangster Don King and entertainer James Brown – appears to believe the young organizers are as morally debased and materially obsessed as himself; that self-aggrandizement is their real motivation. “And they play on your ego. ‘Oh, you young and hip, you’re full of fire. You’re the new face.’ All the stuff that they know will titillate your ears. That’s what a pimp says to a ho.”

Sharpton is actually confessing to his own deepest yearnings.

The youth have scoped Sharpton’s whole card: he is a fraud, an activist-for-hire who has found his niche in the bosom of the beast. But he strains to maintain the posture of Movement Man. “How you going to be more mad at folk that are marching for the same cause then you are against the folks y’all are marching against? Don’t you see a trick in there?” Sharpton asked.

Yes, they do – they see that Sharpton is the trickster, whose aim is to Shanghai Black people’s energies and grievances into service to the Democratic Party – just as did an earlier generation of misleaders. What followed was 45 years of demobilization, a “Winter in America,” as Gil Scott-Heron put it, “where “ain’t nobody fighting, cause nobody knows what to save.” The rulers used this long period of non-resistance to build the Black Mass Incarceration State that the Ferguson-inspired rebellion seeks to dismantle. To accomplish this, the new activists have no choice but to challenge the legitimacy of the State’s Black operatives, like Sharpton.

Oprah Winfrey, the media mogul who began her self-marketing journey on the beauty pageant circuit, claims that the young activists don’t have goals. “I think it’s wonderful to march and to protest and it’s wonderful to see all across the country, people doing it,” she says. “But what I’m looking for is some kind of leadership to come out of this to say, ‘This is what we want. This is what we want. This is what has to change, and these are the steps that we need to take to make these changes, and this is what we’re willing to do to get it.’”

“Oprah’s beef is the same as Sharpton’s: she rejects the validity of activism outside electoral politics.”

What Oprah is really looking for is a movement that reveres the opinions and privileges of Black billionaires, and wishes only that there were more of them. As Black Lives Matter activists have tried to remind her, they have been promulgating public demands and taking them to the streets since the middle of August. Oprah, the journalist, should know that. Her beef is the same as Sharpton’s: she rejects the validity of activism outside electoral politics. Indeed, for Oprah, periodic exercise of the ballot is the only serious kind of politics. Selma, the movie produced by her company, put words to that effect in Dr. Martin Luther King’s mouth – a crime against truth and Dr. King’s legacy.

The problem with Winfrey and Sharpton is not their ages (61 and 60, respectively), but their allegiance to Power. (Based on her wealth, Winfrey is one of the very few genuine Black members of the ruling class, while Sharpton is a mere servant.) To describe their conflict with the burgeoning movement as generational is an insult, not only to young activists, but to the Black strugglers of the Sixties and early Seventies, some of whom remain in prison two and a half generations later. Many of those who participated in the grassroots struggles of this period are only a couple of years older than Winfrey and Sharpton, but younger than lots of the misleaders in the Congressional Black Caucus.

The budding new movement confronts the same power relationships that crushed a previous generation of activists, leaving Black American political leadership in the hands of the most opportunistic, self-serving elements of the community – men and women who made common cause with the growing Mass Black Incarceration State. They are still in place, and more duplicitous than ever. The fight against them – that is, the internal Black struggle – is inseparable from the fight against what we used to call The Man.