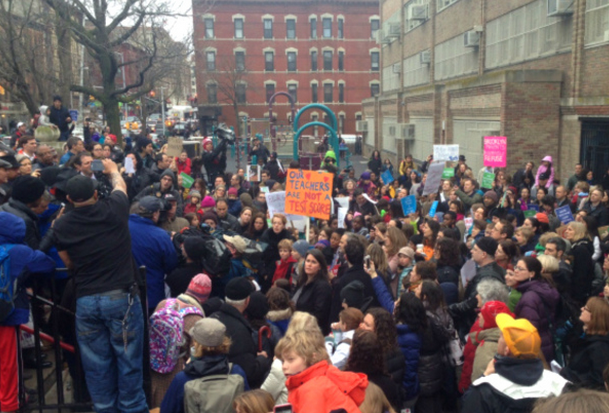 Opt Out Movement: Tests Designed To Fail Most Students

PHOTO: Geoff Decker A protest in 2014 at P.S. 321 in Park Slope against the state English exams. The number of families at P.S. 321 who opted out of the tests increased dramatically this year.

It is important to remember a few key facts about the Opt Out Movement.

Number one: It was created and is led by parents, not by teachers or unions. In New York, where 20% of the students refused the mandated tests, the leader of the state’s teachers’ union did not endorse opt out until a few days before the testing started. The organizations promoting the opt out were grassroots, unfunded, and parent-led.

Number two: The opt out movement did not arise in opposition to the publication or implementation of the Common Core standards. It was only when parents received the results of the first round of Common Core testing that they got angry and got organized to fight the tests. Recall that 70% of the students in the state “failed” the first round of testing. Parents in districts where almost all the children graduate from high school, and where most are admitted to four-year colleges were told to their astonishment that their children were “failing.” The parent rebellion started, and State Commissioner John King could not quell it. Secretary of Education Arne Duncan referred to the protestors as “white suburban moms” who all of a sudden discovered that their child was not as “brilliant” as they thought. What an insult!

Number three: In three administrations of the Common Core tests, a majority of students has continued to “fail.”

*In English language arts 2015, only 31.3% of students reached the “proficiency” level across the state.

*Among black and Hispanic students, the “pass” rate was less than 20%.

*Students in New York City almost matched the statewide average, but in the state’s five big cities, only 11% “passed.”

*Among English language learners, only 3.9% “passed” the ELA test. Appalling!

*Among students with disabilities, only 5.7% “passed.” Appalling!

*Achievement gaps between racial groups were unchanged over three years of testing and quite large.

The math scores were better than the ELA scores, but still only 38.1 “passed,” and nearly 62% “failed.” The corresponding scores for black and Hispanic students, English language learners and students with disabilities were far lower. Read the report.

Why are most students failing the Common Core tests in New York? In the past, a majority passed. Did the students get dumber? No. The developers of the Common Core tests decided to use a “cut score” or “passing mark” that was set beyond the capability of the students in each grade. They chose to align the passing mark with the National Assessment of Educational Progress’s achievement levels. (See here andhere.)

That decision was made two years ago. At that time, Catherine Gewertz of Education Week wrote:

The two common-assessment consortia are taking early steps to align the “college readiness” achievement levels on their tests with the rigorous proficiency standard of the National Assessment of Educational Progress, a move that is expected to set many states up for a steep drop in scores.

“After all, fewer than four in 10 children reached the “proficient” level on the 2013 NAEP in reading and math.”

The NAEP “proficiency” level is not a pass-fail mark. It is not a “grade-level” mark. It is a level that represents solid academic achievement. I was on the National Assessment Governing Board for seven years, and I assure you that “proficient” represented work that I would consider to be an A or A- (the highest level, “advanced” is akin to an A+).

Please note that in no state other than Massachusetts has as much as 50% of students reached “proficient.” In no state have 60% reached the “proficient” level, and state scores have been calculated since 1992.

Thus, the developers of the Common Core tests chose a passing mark that they knew in advance would fail most students and would produce even higher failure rates among black and Hispanic students, as well as dismal passing rates for students with disabilities and English language learners. Based on NAEP, there is no evidence that harder tests and higher bars lead to smaller achievement gaps.

They set the bar so high that the tests are designed to fail most students. Do students feel motivated to work harder if they fail every year?

Parents figured this out, and they didn’t see why the state had adopted tests that most children were certain to fail.

And that is why there is an Opt Out movement. Parents do not want to participate in a system that is rigged against their children. They don’t want to be part of a system where their children’s test scores determine their teachers’ reputation, livelihood, and future. They want to bring that system crashing down and restore common sense to education.