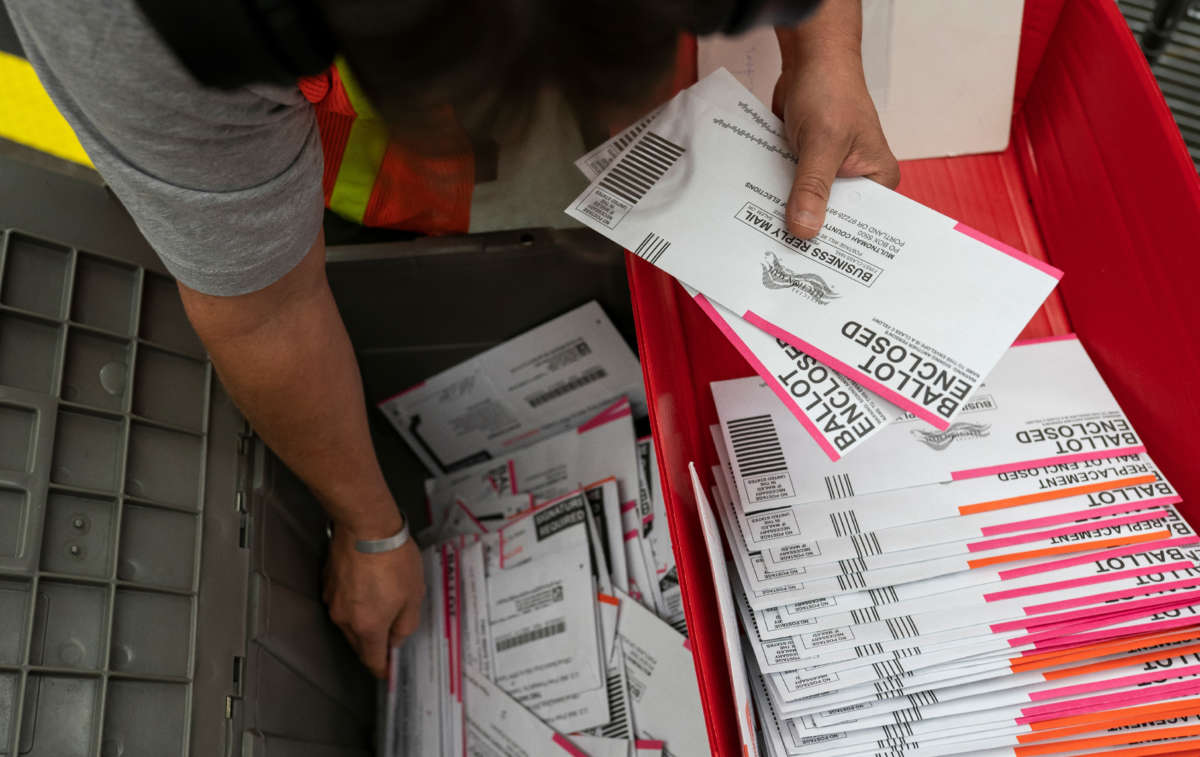 Voters in Oregon approved a historic ballot initiative that would decriminalize possession of smaller amounts of all illegal drugs and funnel tax revenue from legal marijuana sales into addiction treatment, potentially providing an early model for combating deep racial disparities in the criminal legal system and significantly slowing the war on drugs.

Now that Measure 110 has passed with nearly 59 percent of the vote, racial disparities in drug arrests are expected to drop by an astounding 94 percent, according to an analysis by the Oregon Criminal Justice Commission, a state agency. Drug convictions against Black and Native people are expected to drop by 95 percent. In Oregon (and many other parts of the country), Black and Native people are targeted by police and arrested for possessing drugs at much higher rates than whites, despite similar rates of drug use among people of various backgrounds.

As activists have long pointed out, drug prohibition makes communities of color targets for arrest and incarceration. The drug war served as a backdrop to the police-perpetrated killings of George Floyd and Breonna Taylor, among countless others. After Officer Derek Chauvin knelt on Floyd’s neck for nearly nine minutes, another office participating in the arrest turned to shocked onlookers and said, “Don’t do drugs, guys.” Police would later suggest that drug use contributed to Floyd’s death, even though it was the violent arrest that clearly killed him.

In Louisville, a botched no-knock drug raid resulted in the murder of Breonna Taylor, an emergency room technician shot by police in her own apartment. The killings of Floyd, Taylor and other Black people targeted by police sparked widespread protests demanding racial justice and the defunding of police. For racial justice activists, ending drug criminalization is one critical component of preventing police violence and reducing incarceration.

Additionally, New Jersey, Arizona, Montana and South Dakota legalized marijuana for recreational use, joining the 11 states that have already voted to legalize the most popular drug in the United States that remains illegal under federal law.

Supporters of Oregon’s Measure 110 say it would also increase access to drug treatment in a state where federal data suggest people living with addiction face significant barriers to accessing treatment. Nationally, drug reformers and public health experts worry that aggressive policing is exacerbating the opioid overdose epidemic while millions of people in need are unable to access effective, evidence-based addiction treatments. As advocates point out, drug arrests reinforce stigma around drug use and fear of law enforcement prevents people from accessing addiction treatment.

Instead of arresting, jailing and forcing people who use drugs into court-ordered treatment they may not want or need, Measure 110 aims to expand access to addiction treatment for everyone, regardless of whether the police and criminal legal system intervene in their lives. Advocates say this is a major first step toward taking a public health approach to drugs, rather than punishing and criminalizing people for getting high or living with addiction.

“Punishing people for a health condition is cruel, and I think that if we honestly believe that addiction is a health condition and it is a public health crisis, treating it through a criminal justice lens is not going to work,” said Haven Wheelock, a petitioner backing Measure 110 and the coordinator of the Injection Drug Users Health Services program at OutsideIn.org, a group supporting houseless people in Portland. “Besides, we have been trying to for 100 years and it has not worked.”

By funneling tens of millions of dollars in tax revenue from legal marijuana sales into a grant program, Measure 110 will also support harm reduction, housing and other social services for people who use drugs, have a substance use disorder and/or are in recovery from addiction, according to Drug Policy Action, a national group that has spent $4.5 million backing Measure 110.

“Because we understand treatment cannot be a one-size-fits-all approach,” said Matt Sutton, a spokesperson for Drug Policy Action, in an interview. “It’s hard to ask someone to stay sober if they don’t even have a roof over their head.”

Harm reduction services for opioid users, such as syringe exchange and naloxone distribution, prevent overdose deaths and the spread of disease, but often do not receive federal funding earmarked for drug treatment. Wheelock said these types of services help people who are using drugs protect their health, while other supports are needed to help those in recovery avoid falling back into a cycle of addiction.

“There are a lot of people who need access to harm reduction services who may or may not need access to [addiction] treatment services,” Wheelock said in an interview. She also emphasized the importance of health care, housing, and other supports for people exiting addiction treatment.

While possessing smaller amounts of marijuana is now legal or decriminalized in a number of states and cities, Measure 110 will make Oregon the first state to remove criminal penalties for possessing small amounts of any illegal drug, including cocaine, methamphetamine and opioids. Currently classified as a misdemeanor, low-level drug offenses would become civil infractions akin to a traffic ticket. Cops would no longer arrest and jail adults and teenagers solely for carrying drugs for personal use; instead they could issue a ticket with a $100 fine. The fine would be waived if the person agrees to a health assessment with a social worker.

If Oregon sees fewer drug arrests and better outcomes for people living with addiction, the initiative would provide an early model for decriminalizing drugs in other parts of the country. Portugal adopted a similar approach to drugs in 2001 and saw a major reduction in overdose deaths and new HIV infections. Advocates are now pushing Congress to introduce legislation that would eliminate criminal penalties for small amounts of all drugs nationally. The proposal would shift the responsibility for regulating controlled substances from the Drug Enforcement Administration, a law enforcement agency that activists say should be abolished, to the National Institutes of Health. As the overdose epidemic continues and people across the country clamor for racial justice, a push toward a public health approach to drugs could make waves if Measure 110 is a success and the Democrats maintain control of the House or win a majority in the Senate in today’s elections.

About 8,900 people are arrested each year in Oregon for simple drug possession, according to state data. Nationally, 86 percent of the 1.6 million people arrested on drug charges were arrested for possession alone, according to Drug Policy Action. A criminal conviction can erect barriers to housing, employment and public assistance, making recovery more difficult for people living with drug addiction. Drug convictions also increase the risk that a parent will lose custody of their children, or an immigrant will lose their legal status and be separated from their family.

Measure 110 does not legalize drugs, and selling, manufacturing and other “commercial” drug crimes would remain felony offenses. Moreover, the measure does not represent “full decriminalization” of simple possession because police would still be able to issue tickets. However, Sutton said the power that police currently hold over people who use drugs would be reduced. With its emphasis on helping people access treatment, proponents hope the measure will resonate with voters and make Oregon the first state to adopt such a historic reform.

“While it would not completely remove law enforcement from these interactions, we do estimate it will minimize interactions [with police],” Sutton said. “They won’t have the same power over people that they currently do to … ruin lives.”

Under Measure 110, people ticketed for drug possession will choose between paying the $100 fine or receiving a health assessment at “addiction recovery centers” that would be established across the state with excess tax revenue from Oregon’s booming legal cannabis industry. There they will meet with a social worker who would help them determine a treatment plan and connect them with service providers — if treatment is determined to be needed at all.

Sutton said people receiving health assessments can decide whether they want to accept the treatment plan. Additionally, service at the addiction treatment centers would be available to everyone, not just people ticketed for drug possession.

“The services are there, should people need and want them, there’s nothing mandated on anyone, unlike drug courts and other coercive treatment programs that require people to adhere to strict abstinence or be punished with jail time,” Sutton said. “And what’s really unique about this measure is it provides access to resources that address the full range of people’s needs — whether that be treatment, housing, employment or other health services.”

Measure 110 is backed by a long list of organizations, including racial justice groups and advocates for mental health and addiction treatment, as well as public health and medical associations. However, it faced opposition from some members of the addiction recovery community, including for-profit treatment centers that contract with the state as part of court-ordered rehab programs. They worry removing criminal penalties for drug possession would prevent judges from forcing people into rehab, and it could also affect their bottom line. (Additionally, a defense attorney who represents drug defendants has poured money into the “No on Measure 110” campaign.)

There’s a long-running debate over the efficacy of drug courts, which force people into treatment as an alternative to incarceration, but many advocates for drug users say they are inhumane and dangerous. While Measure 110 will not likely do away with drug courts entirely — people charged with other crimes besides drug possession could still be sentenced to rehab — it does prevent people charged with possession alone from being coerced into treatment. It also prevents drug users from being saddled with court fees and other costly and time-consuming requirements imposed by the criminal legal system, as well as a criminal record, all of which can complicate recovery for people living with addiction.

When people have criminal charges on their record, or fail to complete court-ordered drug rehab and other requirements, they are more likely to be punished further and end up incarcerated. Evidence-based drug treatment for opioids, for example, are still not available in most jails and prisons, and people recently released from incarceration are 40 times more likely to die from an opioid overdose than the rest of the population.

“It’s really exciting to see how much support we’re seeing,” Wheelock said. “As someone who has been in this game a really long time, I never thought I would see the day when we would really be moving in this direction in such a concrete way.”

Mike Ludwig is a staff reporter at Truthout and a contributor to the Truthout anthology, Who Do You Serve, Who Do You Protect? In 2014 and 2017, Project Censored featured Ludwig’s reporting on its annual list of the top 25 independent news stories that the corporate media ignored. Follow him on Twitter: @ludwig_mike.