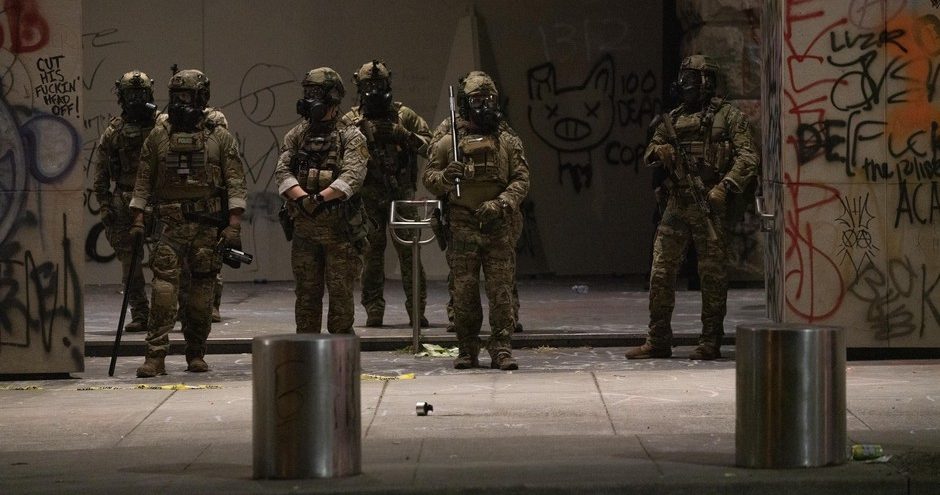 Above photo: Federal officers in front of the Mark O. Hatfield federal courthouse in Portland, Ore., on July 12, 2020. Earlier in the night, federal law enforcement officers shot a demonstrator in the head with a less lethal impact munition, causing severe injury. Jonathan Levinson/OPB.

“Federal law enforcement officers have been using unmarked vehicles to drive around downtown Portland and detain protesters since at least July 14. Personal accounts and multiple videos posted online show the officers driving up to people, detaining individuals with no explanation of why they are being arrested, and driving off.

The tactic appears to be another escalation in federal force deployed on Portland city streets, as federal officials and President Donald Trump have said they plan to “quell” nightly protests outside the federal courthouse and Multnomah County Justice Center that have lasted for more than six weeks.

Federal officers have charged at least 13 people with crimes related to the protests so far, while others have been arrested and released, including Pettibone. They also left one demonstrator hospitalized with skull fractures after shooting him in the face with so-called “less lethal” munitions July 11.”

Today, Talking Points Memo writes that not only is the Department of Homeland Security (DHS) refusing to withdraw their officers but also that they want to take the tactics elsewhere:

“When asked about calls for an investigation into DHS police tactics in Portland, Oregon, Acting Deputy Secretary of Homeland Security Ken Cuccinelli tells NPR not only are they not going to stop but they want to take the tactics nationwide.”

The Oregon Department of Justice is suing several federal agencies for civil rights abuses, and state prosecutors will potentially pursue criminal charges against a federal officer who seriously injured a protester.

The federal lawsuit names the U.S. Department of Homeland Security, the U.S. Marshals Service, the United States Customs and Border Protection and the Federal Protective Service, agencies that have had a role in stepped-up force used against protesters since early July. The state filed the lawsuit late Friday night.

It lists defendants specifically as John Does 1-10 because the “identity of the officers is not known, nor is their agency affiliation,” the lawsuit states.

According to DOJ spokeswoman Kristina Edmunson, the suit accuses the agencies of engaging “in unlawful law enforcement in violation of the civil rights of Oregon citizens by seizing and detaining them without probable cause.”

State attorneys are asking a judge to issue a temporary restraining order that “would immediately stop federal authorities from unlawfully detaining Oregonians,” the DOJ said in a release.

The DOJ’s lawsuit is asking a judge to find that the federal agencies’ tactics are indeed unlawful and violate Oregonians’ First, Fourth and Fifth amendment constitutional rights.

It is also asking that federal agents and officers identify themselves and their agencies before detaining or arresting any person, explain to the person why they’re being arrested or detained, and not arrest any person without probable cause or a warrant.

The agency said that its Criminal Justice Division has also opened a criminal investigation, joined by Multnomah County District Attorney Rod Underhill, in the case of Donavan LaBella, a peaceful demonstrator who was shot in the head with an impact munition last Saturday night, Edmunson said.

Those munitions are intended to be aimed below the waist.

LaBella’s mom said she believes the officer aimed at LaBella’s head.“He’s 6-foot-5,” said Desiree Labella, referring to her son. “He has to be a terribly trained marksman to be off by 3 feet to hit him in the forehead right between the eyes. If he’s that bad of a shot at such a short distance he shouldn’t have a gun.”

The lawsuit, which is the second announced against federal authorities on Friday, comes after reporting by OPB that revealed federal agents have detained peaceful protesters using unmarked vehicles, with little explanation or indication of which agency they belong to or why people are being taken into custody.

“I share the concerns of our state and local leaders – and our Oregon U.S. Senators and certain Congressional representatives – that the current escalation of fear and violence in downtown Portland is being driven by federal law enforcement tactics that are entirely unnecessary and out of character with the Oregon way. These tactics must stop,” Oregon Attorney General Ellen Rosenblum said in a statement.

The DOJ lawsuit specifically highlighted the case of Mark Pettibone, a demonstrator who was snatched off the street by federal officers in the early hours of July 16, put into a van, and brought to the federal courthouse.

“On information and belief, defendants did not have a warrant to seize Pettibone or the other citizens who have been detained, and will continue to seize individuals off the street without a warrant, in the absence of an injunction,” the lawsuit reads.

Due to both federal agents and their vehicles being unmarked, the lawsuit states that Oregonians could be at risk of kidnapping by “militias and other civilian ‘volunteers’ taking it onto themselves to pull peaceful protesters into their cars, in a manner that resembles the federal actions described…”

Pettibone echoed that concern in his declaration within the lawsuit.

“I did not know whether the men were police or far-right extremists, who, in my experience, frequently don military-like outfits and harass left-leaning protesters in Portland,” Pettibone said.

Pettibone’s arrest has spurred national attention as President Trump has made Portland a focal point in recent days, criticizing local elected leaders for being overly lenient on protesters. On Thursday, acting Homeland Security Secretary Chad Wolf flew into Portland to tour the Mark O. Hatfield Courthouse, the federal facility where graffiti and other vandalism has been frequent in seven weeks of protests over police violence and racial injustice.

City, state and congressional leaders have criticized the federal force’s use of weapons against protesters and demanded their departure.

“The federal administration has chosen Portland to use their scare tactics to stop our residents from protesting police brutality and from supporting the Black Lives Matter movement,” Rosenblum said in a statement. “Every American should be repulsed when they see this happening. If this can happen here in Portland, it can happen anywhere.”