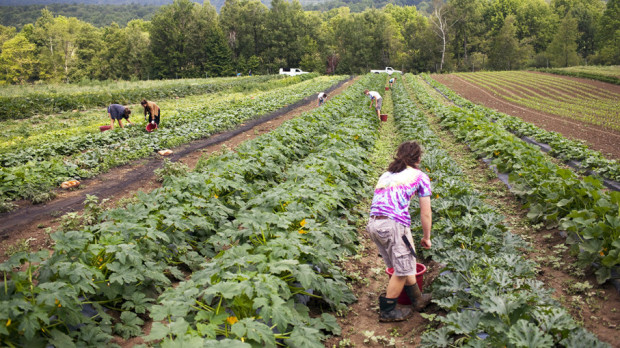 Above Photo: Local workers pick organically grown squash and zucchini at the Clear Brook Farm in Vermont. The farm was started in 1995 by Andrew Knafel and cultivates 25 to 30 acres (10 to 12 hectares) of its more than 200-acre (81-hectare) property. ROBERT NICKELSBERG/GETTY IMAGES

Agriculture is one of the more significant contributors to global warming. Nitrogen-based fertilizers and farm animals generate greenhouse gases, including methane and nitrous oxide. Conventional farming depletes soil of carbon, while planting and managing forests can help offset carbon emissions.

But a new study shows that organic farming fights climate change by trapping temperature-raising carbon in soil, keeping it from contributing to the greenhouse effect. Organic farming can also help offset carbon by storing it in soil. The study is published in the Oct. 1 issue of the journal Advances in Agronomy.

The research was conducted by scientists at Northeastern University’s National Soil Project, in partnership with The Organic Center. They gathered more than 650 topsoil samples from organic farmers in 39 U.S. states and compared those samples with more than 725 conventional soil samples from the continental U.S. The results showed soil from organic farms is 26 percent better at retaining carbon — and retaining it for longer periods of time — than soil that’s farmed with conventional methods and synthetic fertilizers.

Here’s why: The matter that organic farmers use, such as compost, green manure, animal matter and others — as well as the living things in healthy soil, such as microorganisms, earthworms and other components — gives soil humic acids. “It’s all these plus the presence of marvelous, long-lived natural organic compounds in soils called humic substances (HS). Humic substances are responsible for the colors of soils,” Elham Ghabbour, Ph.D., a co-leader of the National Soil Project, said in an email.

“A number of studies have shown that practices commonly used in organic farming are linked to higher levels of total soil organic carbon,” Jessica Shade, Ph.D. said in an email. Shade is the director of science programs at The Organic Center in Washington, D.C. “These practices include extended crop rotations, rotational grazing, fallowing and the use of manure, compost and legume cover crops to manage soil fertility, and are likely the same factors driving the increased levels of humic substances we found in organically managed soils.”

What is encouraging to researchers such as Shade, Ghabbour and their colleagues is that organic farming can make significant strides toward fighting — and even reversing — the impact of climate change. Carbon that’s trapped in soil offsets emissions in the atmosphere. “Organic farming … not only acts to reduce greenhouse gas emissions, but it actually acts as a sink for carbon,” Shade said. “For example, in addition to our research, publication by the Rodale Institute has found that managing soils organically can reverse some of the effects of climate change by sequestering more carbon dioxide than is released annually.”

Because of this effect, Shade says the magnitude of switching large farms to organic methods would be a huge stride toward reducing greenhouse gas emissions. But building carbon takes a long time — decades, according to Ghabbour.

Even with that long wait for the carbon to build up in soil, there are shorter-term benefits to organic farming that help the environment and improve farming. “The same practices that sequester carbon are also correlated with other soil health benefits that make the soil more healthy and resistant to climate change,” Shade said. For example, organic farms, which generally have lower yields, outperform conventional farms during drought.

Consumers can help, Shade said, by choosing organic produce at grocery stores and farmers’ markets. “Organic farmers are required to implement an organic systems plan that improves soil health,” Shade said. “They can’t use synthetic fertilizer, and so rely on carbon-building soil amendments such as fertilizer and manure for nutrient management.”

Greenhouse gases like carbon dioxide and methane trap heat in Earth’s atmosphere, causing global warming. About 150 years ago, at the start of the Industrial Revolution, the amount of carbon dioxide in the atmosphere was 270 parts per million volume (ppmv). Now, the amount is 400 ppmv. Under former President Obama’s leadership, the United States had agreed to reduce its greenhouse gas emissions by 26 to 28 percent by 2025. Despite President Trump’s statement to withdraw the United States from the Paris Agreement, many U.S. cities are continuing with plans to reduce carbon emissions.