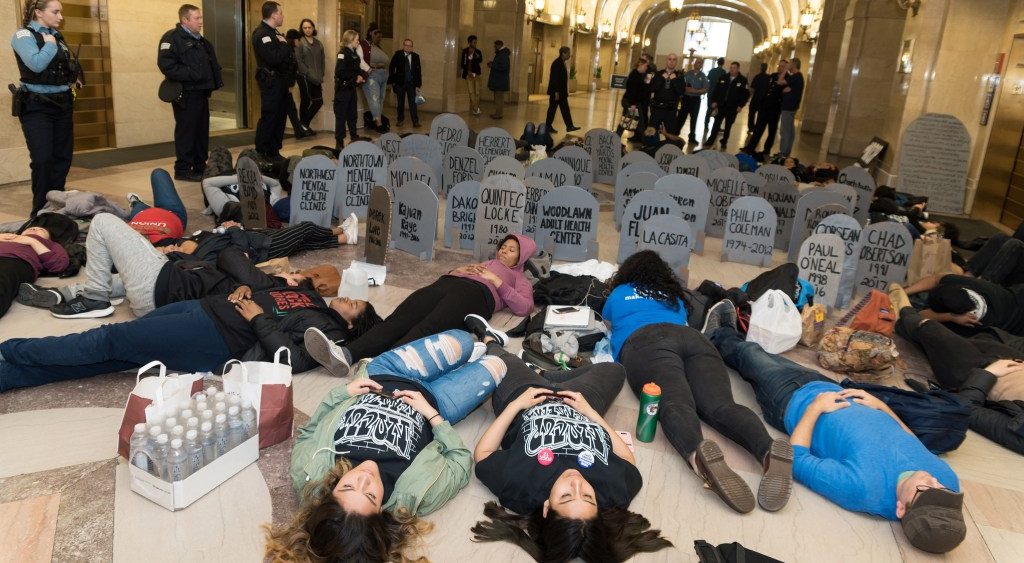 They’re Sharing What They Learned.

The No Cop Academy toolkit aims to show other young organizers how they can take collective action on issues impacting their communities.

Garfield Park — Activists who tried to stop the city from bringing a police training facility to the West Side have developed a toolkit to pass along wisdom to other groups organizing around the issue of police funding.

The organizing toolkit released Monday is an archive of the No Cop Academy campaign from 2017 to 2019, protesting a $95 million police training facility in West Garfield Park. The materials document the tactics activists used to build a powerful coalition demanding that City Hall invest in schools, mental health clinics and social services rather than pouring more money into Chicago Police.

“These resources in the toolkit have been years in the making,” said organizer Destiny Harris. “There are campaigns going on all over the country far and wide. Campaigns are an important tool to building power. We wanted to be able to break down the parts, the ways we built community power through the No Cop Academy campaign.”

The campaign was launched in 2017 when then-Mayor Rahm Emanuel slated the police and fire training center to be built at 4301 W. Chicago Ave. Activists criticized the plan for dedicating more money toward an already massive police budget while doing little to address the root causes of violence or supporting more community-based resources.

Emanuel pushed the controversial proposal through a divided City Council in his final weeks in office in 2019. Mayor Lori Lightfoot, then in a runoff with Cook County President Toni Preckwinkle, supported a new training facility for officers but called on the project to be halted.

After she was elected, she said the current plans for the facility might not be expansive enough to meet the need and signaled that far more than $95 million could be spent on it.

Though the No Cop Academy campaign was not successful in stopping the facility from being built, the effort has many successes and had a lasting impact, Hart said. The activism helped train a formidable cohort of youth leaders and expand public conversations on police violence, abolition of prisons and defunding the police, activist Benji Hart said.

“Sometimes people who don’t share all of the same values can be aligned around one goal,” said Hart, an adult organizer who helped guide the youth-centered campaign.

The campaign also brought together a diverse coalition of 105 organizations — including those that don’t want to defund Chicago Police — by uniting on tangible ways the funding could be better spent, Hart said.

“”Some of the folks who came to the table weren’t totally down with the idea of defunding the Chicago Police Department or the idea of abolition,” Hart said. “They did understand an additional $95 million investment in a police department that already receives $1.7 billion annually is a misappropriation of funds, when we know schools are closing and we’re losing mental health clinics and all these other resources that prevent violence from happening in our communities.”

The No Cop Academy effort also set the stage for more recent and ongoing social and political campaigns, including demands to slash police funding, and the youth-led campaign to remove school resource officers from Chicago Public Schools campuses. Many of the young leaders in those campaigns were also active in No Cop Academy, Hart said.

“Not even we could have imagined… there would be a national uprising making the same demands, to defund the police department and fund social services,” Hart said.