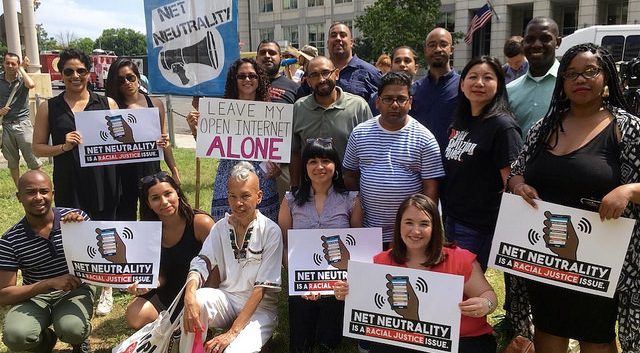 Organizing For Our Rights To Internet Equality

On December 14, 2017, the Federal Communications Commission (FCC), lead by chairman Ajit Pai, voted to dismantle the hard-won net neutrality rules, going against widespread public support for those rules. The public organized in a massive effort to stop the vote, and now organizations, states and people are taking action to revoke and challenge the FCC’s decision. This decision and the public activation around it provide an opportunity to build power not only to win net neutrality, but also to put laws and structures into place that go much farther to create the universal right to high quality, affordable Internet access and equality.

Net Neutrality: What’s Next and How We Win the Fight by Collette Watson

Speech on Broadband as a Public Utility by Harold Feld

Five Fundamentals for the Phone Network Transition by Harold Feld

Jessica Gonzalez is deputy director and senior counsel for Free Press. She works closely with the executive team and key stakeholders to develop and execute strategies to advance Free Press’ mission. Jessica has been a key voice in the fights for Net Neutrality, affordable internet service and media diversity. Previously, she was the executive vice president and general counsel at the National Hispanic Media Coalition, where she led the policy shop and helped coordinate campaigns against racist and xenophobic media programming. Prior to that she was a staff attorney and teaching fellow at Georgetown Law’s Institute for Public Representation, where she represented public interest and civil rights groups before the FCC, the NTIA and in the courts of appeal. Jessica has testified before Congress on multiple occasions, including once before the House to support Net Neutrality while suffering from acute morning sickness, and another time before the Senate while eight months pregnant to support affordable internet access for low-income people. Follow her on Twitter @JGo4Justice.

Harold Feld is senior vice president of Public Knowledge. Before becoming Senior Vice President at Public Knowledge, Harold worked as Senior Vice President of Media Access Project, advocating for the public interest in media, telecommunications, and technology policy for almost 10 years. Prior to joining MAP, Harold was an associate at Covington & Burling, worked on Freedom of Information Act, Privacy Act, and accountability issues at the Department of Energy, and clerked for the D.C. Court of Appeals. He received his B.A. from Princeton University, and his J.D. from Boston University Law School. Harold also writes Tales of the Sausage Factory, a progressive blog on media and telecom policy. In 2007, Illinois Senator Dick Durbin praised him and his blog for “[doing] a lot of great work helping people understand how FCC decisions affect people and communities on the ground.”