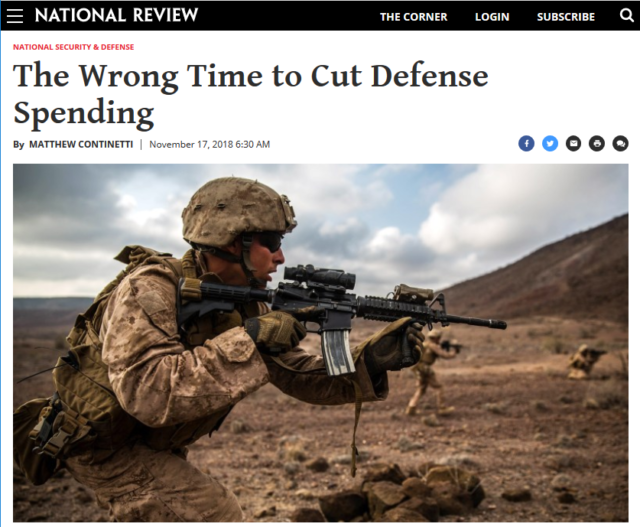 It is a sign of our times that our media attempt to decipher future government policy by analyzing the president’s tweets, like some bizarre game of telephone. Throughout November, there was speculation of a coming reduction in military spending, and when Donald Trump took to Twitter (12/3/18) to describe the $716 billion budget as “crazy,” media took this as confirmation.

The prospect of a cut to the military elicited a storm of condemnation across the media landscape. The National Review (11/17/18) wrote that “cutting the resources available to the Pentagon is a bad idea,” noting that, “for decades, America has short-changed defense” meaning “America’s ability to defend its allies, its partners, and its own vital interests is increasingly in doubt.” In an article headlined “Don’t Cut Military Spending Mr. President” (Wall Street Journal, 11/29/18),  Senate and House Armed Services committee chairs James Inhofe and Mac Thornberry claimed the military is in “crisis” after “inadequate budgets for nearly a decade,” and that “any cut in the Defense budget would be a senseless step backward.”

More centrist outlets concurred. Forbes Magazine (11/26/18) began its article with the words, “The security and well-being of the United States are at greater risk than at any time in decades,” recommending a “sensible and consistent increase” to the budget. Bloomberg (19/11/18) recommended a consistent increase in military spending of 3 percent above inflation for five to ten years, while Reuters (12/4/18) noted the increased “risk” of a lower military budget. 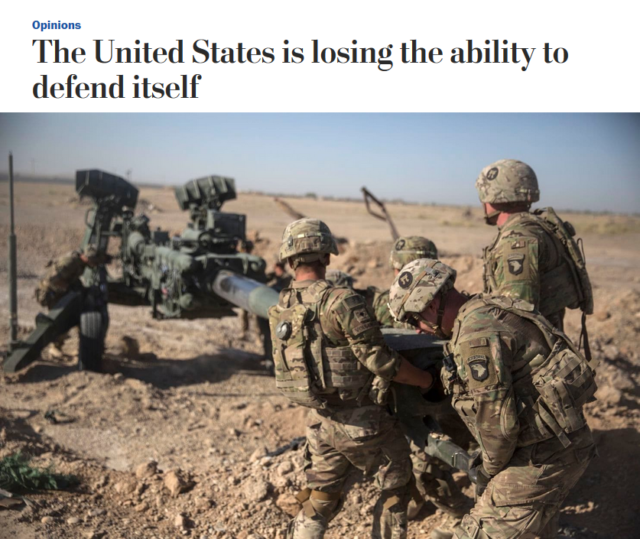 Max Boot (Washington Post, 12/12/18) argues that the US needs to both raise taxes and cut Social Security and Medicare in order to ensure its military’s ability to invade Lithuania.

What exactly was this “risk” that media were so worried about? Max Boot, neo-con fellow of the Council on Foreign Relations—who apparently still supports the Iraq War and demanded ones in Syriaand Libya, while arguing that America should become a world empire—articulated the risk in the Washington Post (12/12/18). Describing a reduction in military spending as “suicide,” and claiming the US is in a “full-blown national security crisis,” he cited the work of a blue-ribbon panel that called for continuous hikes in military spending:

“If the United States had to fight Russia in a Baltic contingency or China in a war over Taiwan, Americans could face a decisive military defeat,” the report warns. “These two nations possess precision-strike capabilities, integrated air defenses, cruise and ballistic missiles, advanced cyberwarfare and anti-satellite capabilities, significant air and naval forces, and nuclear weapons—a suite of advanced capabilities heretofore possessed only by the United States.”… So we’re in deep trouble. We are losing the military edge that has underpinned our security and prosperity since 1945.

Thus, the crisis is that the US could not be assured of destroying the Russian military in a Baltic war or the Chinese in the South China Sea. It is important to note that these necessary wars of defense would not be happening in Maine or California, but thousands of miles away, on the doorsteps of our geopolitical rivals. Boot presents these wars on the other side of the world as impossible to avoid—“if the US had to fight”—continuing a tradition of presenting the US as stumbling or being reluctantly dragged into wars against its will, that we at FAIR (6/22/17) have cataloged. 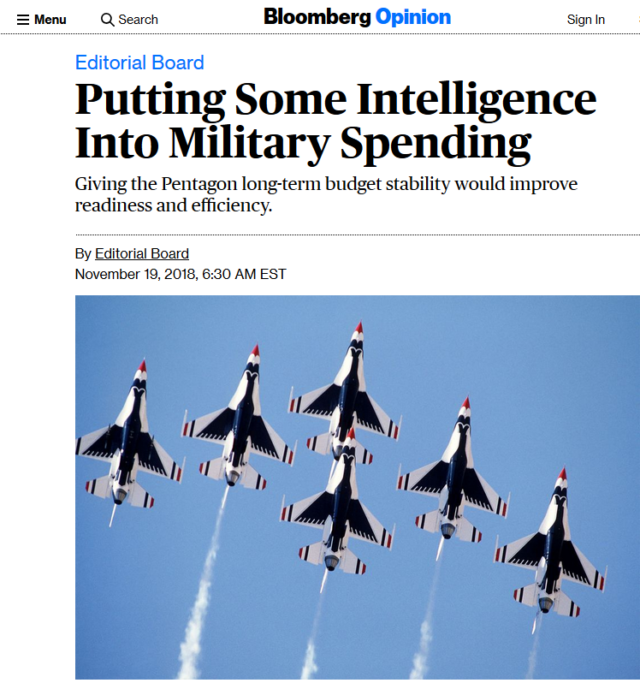 Even these figures do not include military pensions and veterans’ healthcare, or nuclear weapons, and therefore the true total is possibly greater than all other countries combined. Military spending is approaching the highest in recorded history of any country, and the increase in military spending Trump approved last year alone would be enough to make public colleges and universities across the US free to all.In reality, more than half of all US discretionary spending goes to the military, and its war-related spending is a much larger percentage of its budget than in comparable countries—3–5 times as much as Canada, Germany or Japan. In fact, the US spends almost as much on its military as all other countries in the world put together, according to the Stockholm International Peace Research Institute, and has around 800 (official) foreign military bases, placed on every inhabited continent of the world.

Considering the problems of unemployment, poverty, climate change and infrastructure in the US, perhaps tooling up for an intercontinental war against two nuclear-armed superpowers is not the most effective use of trillions of dollars. That reducing a $716 billion war budget can be presented as a threat to the nation, and that “defense” can refer to wars in Taiwan or the Baltic, illustrates the depth of the media’s imperial mindset, and goes to show President Dwight Eisenhower’s warning about the power of the military industrial complex went unheeded.

The media needn’t have worried, as the military industrial complex usually gets its way. President Trump, “with the help of Senator Inhofe and Chairman Thornberry,” according to the Defense Department (London Independent, 12/10/18), agreed to increase the military budget after all, to $750 billion. A lot of people are going to get rich—not least of all Senator Inhofe, who quietly purchased tens of thousands of dollars in Raytheon stock after he met with Trump (CNN, 12/13/18). Raytheon is the world’s largest producer of guided missiles, and is sure to reap a huge windfall from the spending boom.

This whole affair illustrates the important and worrying links between the media, “defense” contractors and politicians. But at least the terrible risk to the United States has been avoided. Those defenseless Air Force Generals and Defense contractors can finally sleep easy at night. 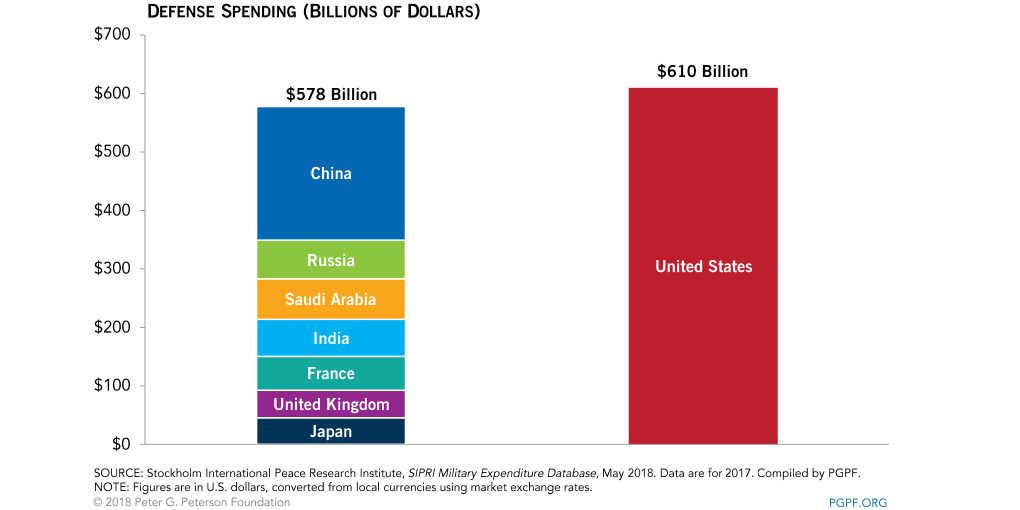