Our Streets: The Story from the Front Lines & How We Fight

Note: At the bottom of this story is a bonus video of the black bloc protest by Eric Tien.

Goldfield reviews the actions from the streets of DC over the Inauguration weekend and, more importantly, discusses, analyzes and projects a path forward. Local DC musician, activist and writer Jason Yawn, a musician with Free Children of Earth, joins her to talk tactics, what to do now and the role of artists in the movement.

A particular focus of their conversation was the black bloc tactics used by some of the protesters. Goldfield correctly points out we need to constantly rethink our tactics in order to measure our effectiveness and build people power. Black bloc tactics are put into the context of the weekend, which included actions at every security checkpoint that led into the inaugural march that were quite varied in themselves, as well as the mass Women’s March. 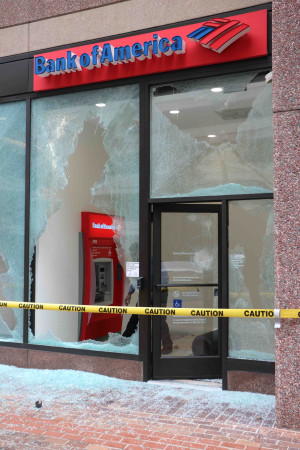 Yawn points out that condemning black bloc tactics divides us and that we should not limit ourselves to only permitted protests. He asks: what violence would have to be done to you before you fight back? Is that being done to others in our country? Is it being done by the United States to others around the world? With these questions in mind he points out that opposing black bloc tactics comes from a place of privilege, the privilege of not suffering violence at the hand of the state. 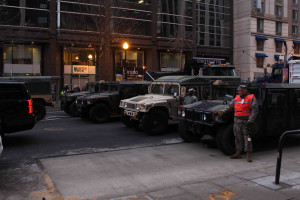 Yawn describes how tactics must be analyzed in the context of the situation and  the goals of the protest. In the context of the Trump inauguration, where people want to show they do not want to accept Trump and will resist him in every way they can, the tactics make sense. The same tactics would not make sense on a normal workday during rush hour, in fact they would be counterproductive. He points out that we are challenging the greatest purveyor of violence in the world and in so doing breaking windows is not violence – property damage is not violence. At what point, do we stop asking nicely, he asks. 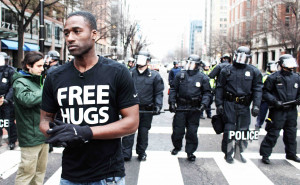 Goldfield raises the question, is there such a thing as a useful tactic that does not disrupt anything? Yawn responds that he is against permitted marches because we do not have to ask permission to protest, it is a human right and one already protected in the US Constitution. These types of tactics are not engaged in to be cool, they must be carefully considered and thought through: will they be effective, is the danger worth the risk, does this protect the lives of others or will they make them worse? What kind of political discussion will come from these tactics? Will there be law enforcement blow black that will do more damage? Will these tactics justify police violence and turn people against the movement? 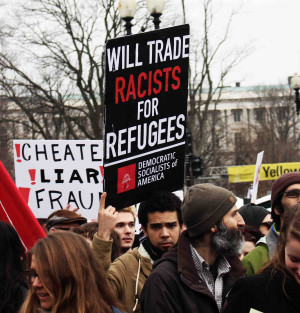 These are difficult questions that must be considered. We know from the history of successful social movements that movements that succeed are mass movements. Fringe movements fail. We also know that a mass movement needs to build and draw more people to it. If black bloc tactics are not clearly justified, they can have the effect of pushing people away from the movement. We also know that over the last 100 years broad-based movements weaken the power structure by pulling people from the power structure to the movement. The group that has the biggest impact when they join the movement, or when some of their members do so, are law enforcement and the security state. When they come to the movement, the existing power structure has lost. Do these tactics help achieve that goal? 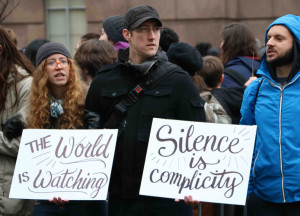 These kinds of conversations will not happen in the mass corporate media so they need to happen in the alternative media so we can understand why people take the actions they take and what they hope to accomplish.

Yawn points out that the inaugural protests showed a wide breadth of actions from radical to permitted tactics – people wanted to affirm their creative energies and challenge the system. All of these actions were a good sign for going forward and building a mass movement that aggressively pursues the transformation the country needs. The real show of solidarity and people power is yet to come. What happens now is what people do next.

There is much more in the discussion, and also a discussion of the important role of art in the popular movement. I urge you to listen to it. And, there are some great photos and videos worth seeing.