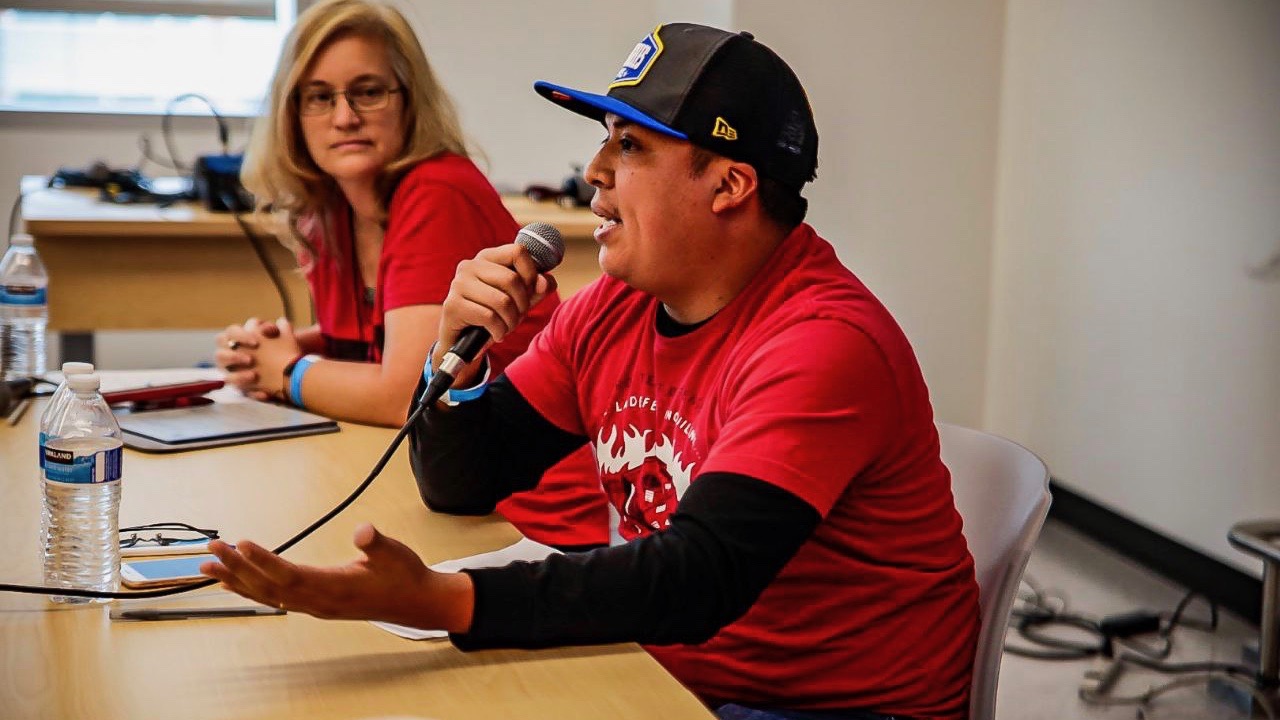 Above Photo: Union de Vecinos organizer Tony Ramirez speaks at the “Empowering our Neighbors” panel at the People’s Summit for Democracy. Midianinja.

Our struggle was always for the poorest of the poor.

As US President Joe Biden’s Summit of the Americas is underway in Los Angeles, a city with 66,400 homeless people, housing takes a front seat in discussions at the People’s Summit that is concurrently taking place.

The ninth Summit of the Americas is taking place in Los Angeles from June 6 to 10, organized by the US-influenced Organization of American States.

The White House, in announcing the US as the host of the Summit back in January, stated: “Working with the city of Los Angeles, Mayor of Los Angeles Eric Garcetti, and Governor of California Gavin Newsom, the United States looks forward to convening leaders and stakeholders across the hemisphere to advance our shared commitment to economic prosperity, security, human rights, and dignity.”

The People’s Summit is being organized concurrently in Los Angeles as a working class call to action against the US government interests that have historically underwritten the Summit of the Americas. In a press statement announcing the People’s Summit, organizers called out the hypocrisy of the US government in declaring a “shared commitment to economic prosperity, security, human rights, and dignity.” The Summit of the Americas is being hosted in a city with one of the highest rates of homelessness per capita in the world. Los Angeles had 66,400 homeless people as of 2020, a 12.7% rise since 2019.

“Organizations in L.A. have consistently condemned how government officials have failed to deal with the deep inequities facing communities in L.A. county—issues that will be undoubtedly underplayed or outright ignored by leaders in this country in the 9th Summit of the Americas,” stated the organizers of the People’s Summit.

As the People’s Summit is unfolding over June 8, 9, and 10, it is clear that housing is a central theme. The Los Angeles Tenants Union (LATU) and the Union de Vecinos, the Eastside Local of LATU, are among the convening organizations of the People’s Summit. These Los Angeles tenant organizers are present at the summit, showing guests from across the Americas what it means to be a poor and working class tenant in one of the world’s richest cities.

“If they want to make our lives a living hell, then we can do the same.” This is how Union de Vecinos organizer Tony Ramirez opened his discussion around the strategy the union uses to deal with the landlords of Los Angeles, whom he called “our class enemy.” Almost one-third of LA tenants are rent burdened, meaning that their landlords take over half of their income in the form of rent.

Ramirez described a militant strategy to deal with the rampant evictions in poor and quickly gentrifying neighborhoods in Los Angeles. Tenants, many of whom were harassed and threatened with eviction, began to confront their landlords directly outside of their homes, causing a public disturbance for the landlords and their neighbors. They began to conduct public shaming campaigns targeting their landlords throughout neighborhoods, putting up mock “wanted” posters. An example of such a poster shaming Los Angeles landlord Bob Buente read, “CEO Bob Buente is a notorious predatory abusive landlord who loves to harass and threaten his tenants…If found, please report to the East Hollywood Local.”

Union de Vecinos organizer Kenia Alcocer described how the union’s militancy, though resonating powerfully with tenants often had consequences for the union. Alcocer told Peoples Dispatch how the union began to struggle against nonprofit organizations which had decided to build so-called “affordable” housing in the working class Latino neighborhood of Boyle Heights.

“At the time, in order for you to qualify for this housing, you had to be making $40,000 a year. A lot of the members of our community in Boyle Heights were making $30,000 or below. A lot of them, $15,000. They didn’t qualify for this housing,” Alcocer said. “And that is when a lot of foundations, because we were attacking some of these organizations that were saying that this was affordable housing, decided to withdraw their funding from Union de Vecinos. We kind of got a lot of backlash in that sense. That’s when we decided that we wanted to be an organization that was not tied to the nonprofit industrial complex, and that was really committed and has always been committed to the community, and that our struggle was always for the poorest of the poor.”

The Importance Of A People’s Summit

Organizers from Union de Vecinos described the importance of attending the People’s Summit, to not only to showcase their organizing strategies, but also to learn. “We’re here because we want to be in international solidarity with people across all of the Americas who are working on the same or similar issues to ours,” young organizer Leonardo told Peoples Dispatch.