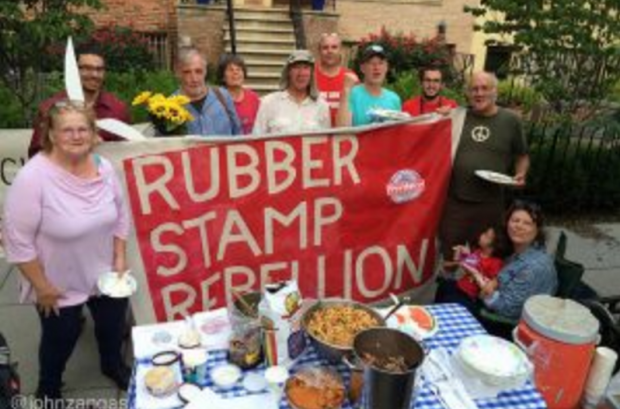 Opponents to the GOP healthcare plan weren’t the only ones paying visits to U.S. Senators on Capitol Hill today. Fracking and gas pipelines are also proving to be contentious issues leading up to a key vote on confirmations to a federal agency.

Communities facing the construction of interstate gas pipelines, compressor stations and storage facilities have been raising a ruckus for several years now about the Federal Energy Regulatory Commission (FERC). The agency has been at a virtual standstill since February when Chairman Norman Bay resigned, leaving too few commissioners to approve major projects. Opponents would like to keep it that way.

Environmentalists from organizations including Delaware Riverkeeper Network and Echo Action NH and representatives of communities impacted by gas infrastructure dropped off letters and held meetings with Senators, demanding that they block confirmations of Commissioners to FERC until the agency is reformed.

“The Federal Energy Regulatory Commission is abusing its authority and the law in alarming ways,” says the letter delivered to lawmakers today. “After three decades of FERC’s unaccountable and irresponsible approach to energy development, the trust of the American people has been strained beyond the breaking point.” They call for Congressional hearings into abuses of power and introduction of legislation for “meaningful reform.”

FERC has only rejected two applications for gas infrastructure in 30 years because companies didn’t have customers lined up, not for environmental or safety reasons. While FERC is only supposed to approve projects which are in the public interest, as mandated by the National Environmental Protection Act (NEPA) and the Natural Gas Act (NGA). But the agency defines public interest as “customers.” As a consequence, people around the country say that gas companies are taking their land against their will, giving rise to the slogan, “No eminent domain for private gain.”

Last December, a “people’s hearing” was convened in Washington, DC, in which dozens of citizens gave testimony about FERC’s systematic failure to address public concerns and acting as a rubber stamp for permits. The testimony was compiled into thousands of pages of “evidence.”

President Trump nominated four candidates to fill the empty slots at FERC and restore the Commission’s quorum. Neil Chatterjee is a former energy advisor to Sen. Mitchell McConnell. Robert Powelson is a former Pennsylvania Public Utility Commissioner. Kevin Glick, the sole Democrat is an Energy and Natural Resources Committee aide who previously worked for an electrical utility. Kevin McIntyre is a lawyer who has represented energy industry clients.

The nominations of McIntyre and Glick still need to be approved by the Senate Energy and Natural Resources Committee, then all four will go to a full Senate vote. Protesters disrupted the committee votes on the nominations of Chatterjee and Powelson.

In general, FERC critics regard all of the nominees as firmly pro-industry, although left-leaning advocacy group Public Citizen has endorsed Robert Glick’s nomination. One nominee, Robert Powelson, has been openly hostile to those protesting FERC’s actions, saying at an industry conference that “the jihad has begun.” Even though he later apologized for using an “inappropriate” term, he simultaneously criticized them for shutting down public discussion and “harrassing” officials and their families.

About 150 people have been arrested disrupting the open meetings which FERC holds every month. Members of the public are not allowed to speak at public meetings. The agency regards anything said at the meetings as ex parte communication.

The cozy relationships which energy industry executives enjoy with FERC staff and commissioners, on the other hand, seem to be flourishing. The CEO of Southern Energy, for example, was recently reported to have attended a private dinner with Collette Honorable, a Commissioner who just left the agency. Honorable immediately went to work for law firm which lobbies FERC on behalf of Dominion Energy.

Several pipelines, such as Energy Transfer Partners’ Rover Pipeline in Ohio, were hurriedly approved before Bay’s departure. The Rover Pipeline has had numerous accidents since it began construction this spring. The spilling of 5 million gallons of drilling mud and diesel fuel in Ohio wetlands in April has realized its critics worst fears. ETP’s construction practices, which Oil Change International describes as “simply reckless,” led FERC to take the unusual action of partially halting construction of the pipeline.