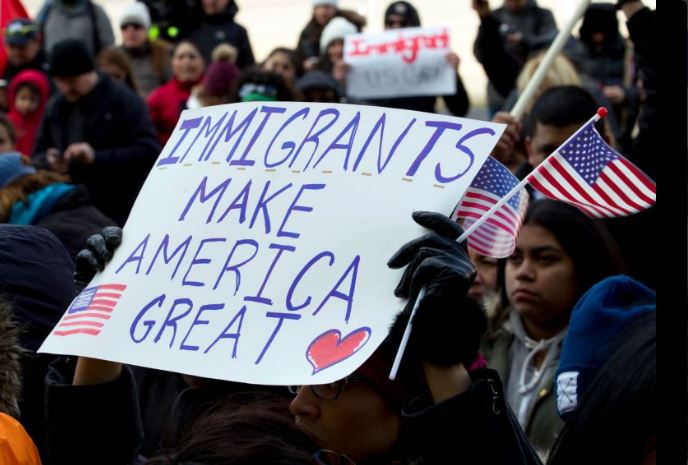 Above photo from Fusion.

Nationwide (May 1, 2017) —  Immigrant workers in over 30 states across the country joined a national strike billed as a “Day Without Immigrants” today to demonstrate that the country depends on the labor of immigrants and working class people of color.  Immigrant rights groups, worker centers and unions joined together for the largest national strike since the immigrant-led Mega Marches of 2006. The Cosecha movement was the first group to call for the “Day Without Immigrants” May Day strike, with a public launch in early February.

Cosecha led strikes and marches in over 40 cities across the country, where thousands of businesses closed their stores. In Minneapolis protesters shut down the Federal Immigration Building, Grand Rapids met police blockades as thousands took to the streets, and community members celebrated Un Dia Sin Inmigrantes with music and dance throughout downtown Lawrence, MA. Students held mass walkouts in Newark and over a thousand farmworkers went strike in the okra fields of Homestead, Florida. Workers also went on strike in cities where Trump won with decisive margins, including in Tulsa, Wichita, and Memphis.

As the daughter of hardest working immigrants I know, my parents, I march with all immigrants + workers! #MayDay2017 #DayWithoutImmigrants pic.twitter.com/JNtaTPwlWr

I am an immigrant and refugee. Today I march for immigrant & refugee rights. #RefugeesWelcome #DayWithoutImmigrants #MayDay2017 pic.twitter.com/Ys5p1jZGDw

“This Day Without Immigrants is the first step in a series of strikes and boycotts that will change the conversation on immigration in the United States,” said Maria Fernanda Cabello, a undocumented leader and the May 1st campaign coordinator with Cosecha. “We believe that when the country recognizes it depends on immigrant labor to function, we will win permanent protection from deportation for the 11 million undocumented immigrants. After years of broken promises, raids, driving in fear of being pulled over, not being able to bury our loved ones, Trump is just the last straw.”

“Aqui me quedo. Yo no tengo miedo.” I’m staying here. I’m not afraid, they chant in Lawrence. #DayWithoutImmigrants pic.twitter.com/0z4E4b3qID

“We are the workers who harvest and prepare food, who repair homes, who come into office buildings after 7pm to clean them,” affirmed Francisca Santiago, a farmworker from Homestead, Florida who joined the May 1st Strike. “Yesterday, I did not go to the fields, I did not buy anything, and I marched for the first time in my life.”

Cosecha leaders across the country will support any workers who fear employer retaliation by providing legal support and plan to launch a series of boycotts of any businesses that did not stand with their workers. Immigrant workers and business owners who closed yesterday are available for interviews. For a full list of events see Cosecha’s website.

Cosecha is a new national movement fighting for permanent protection, dignity and respect for all 11 million undocumented immigrants in the United States through mass economic noncooperation. Since our public launch in September, Cosecha has shut down Trump Tower, stopped the deportations of immigrant workers who were taken in the largest workplace raid under the Obama Administration, and launched the national #SanctuaryCampus Movement with mass student walkouts. On February 10th Cosecha publicly launched the May 1st #DayWithoutImmigrants Strike campaign at our National Assembly in Boston.