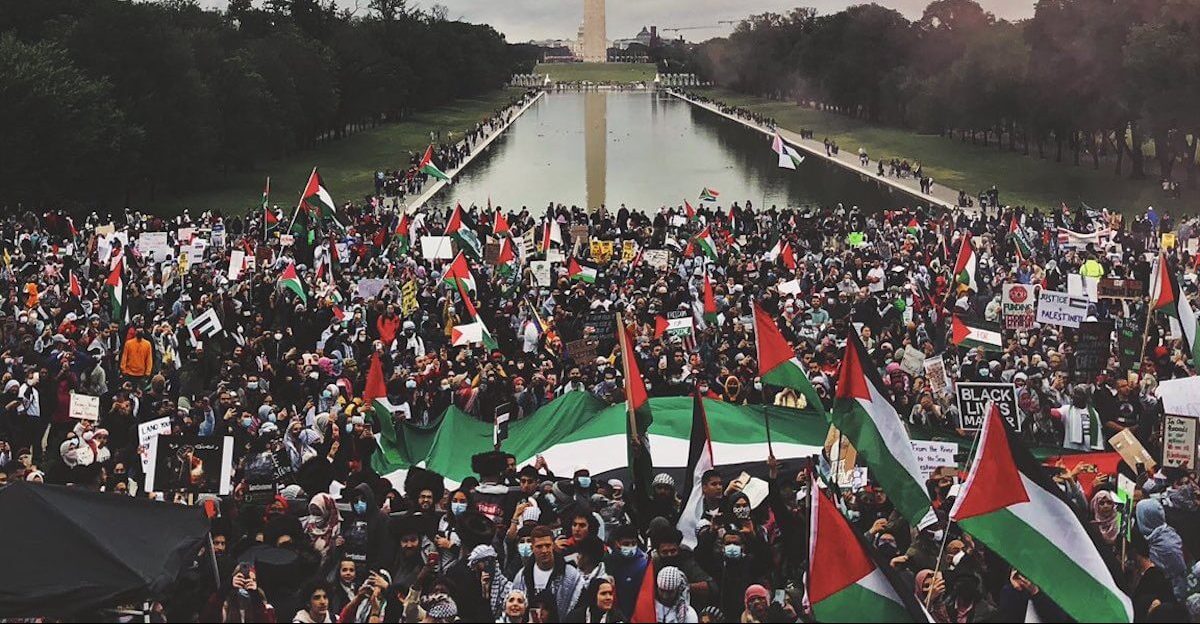 Over 35,000 People Rally For Palestine In DC

‘The Landscape is Shifting’

Over 35,000 protestors converged in Washington DC this Memorial Day weekend for The National March for Palestine, the largest protest against U.S. foreign policy in the nation’s capital in decades.

Standing atop the steps of the Lincoln Memorial, Nuha Maharoof peered over the crowd at the National March for Palestine on Saturday. To her left, she saw a man on the ledge set off red and green smoke grenades, signifying the colors of the Palestinian flag. She described the cinematic moment “like a scene from a movie, every head in the crowd turned to the sky to watch the colors dissipate.” She pulled out her phone and captured the iconic moment, saying her heart filled with hope for Palestine. The image has since gone viral. She had learned of the protest the day before from social media posts and decided to go with her friends. We tracked her down through a Google image search.

The scene at the Lincoln Memorial in Washington DC was a sharp contrast to the one six months ago when Trump supporters stormed Capitol Hill in an attempted insurrection. Vexed by white supremacy at home and settler colonial foreign policy abroad, Muslim, Palestinian, and progressive groups launched a wide coalition of support in solidarity with Palestine.

Over 35,000 protestors converged in Washington DC this Memorial Day weekend for The National March for Palestine, the largest nationwide protest against U.S. foreign policy in decades. More than 100 buses arrived at the Lincoln Memorial from as far away as Minneapolis, Minnesota and Dallas, Texas. Organized in less than one week, the event unfurled the potential for Muslim American and Palestinian activists to lead antiwar mobilizations. The program was spearheaded by American Muslims for Palestine and the U.S. Council of Muslim Organizations. The groups urged sanctions on Israel in the wake of its recent 11 day bombing campaign in Gaza where over 66 children were killed, including 11 who were recovering from trauma of previous Israeli government attacks.

This unprecedented gathering on Saturday at the Lincoln Memorial was a clear sign to President Joe Biden, his administration, and to Israel that public opinion in the United States is shifting, and people of conscience demand a tangible solution for Palestinians who have endured decades of dehumanization, marginalization, and subjugation.

The rally and march were a collective condemnation of two weeks of Israeli indiscriminate bombing of Palestinian civilians including children and destruction of infrastructure including homes, schools and clinics. The storming and attacking of Masjid Al-Aqsa, the third holiest site for Muslims, during the holy month of Ramadan, and expulsion of Palestinians from their homes in neighborhood of Sheikh Jarrah in East Jerusalem was the catalyst that awakened a sleeping giant worldwide demanding President Biden take bold steps which he failed to deliver.

+130 organizations endorsed the #March4Palestine. Thank you for your solidarity and courage. pic.twitter.com/IVKCdojTa0

The U.S. Council of Muslim Organizations and American Muslims for Palestine have demanded the placement of an arms embargo on Israel, the cancellation of the US-Israel free trade agreement, a shut down of ‘charitable’ organizations supporting Israeli war crimes, and a ban on the import of products from Israel’s illegal colonies. The groups also sought to end weapons transfer to Israel, objecting to gross violations of human rights with US weapons and violations of the Foreign Assistance Act and Arms Export Control Act.

The National March for Palestine was the culmination of weeks of organizing protests in solidarity with Palestine, building on the 73 year resistance campaign to the Nakba. While Israel’s bombing campaigns and military strikes are not new, the wave of Palestinian solidarity has ignited a tsunami wave of youth activism, fresh from the surge of Black Lives Matter and climate mobilizations. As members of the National March for Palestine organizing committee, we sensed the urgency of a nationwide grassroots mobilization stemming from campaigns in support of Palestinian families in Sheikh Jarrah and Gaza.

Jinan Deena, who led organizing for more than 100 march volunteers and is the National Organizer at American-Arab Anti-Discrimination Committee (ADC) said, “There’s a lot of behind the scenes work that people don’t see. But the renewed energy I get is from seeing all those faces out in the crowd. People want to help. They want to be there and shout for Palestine. It brings tears to my eyes and it makes me know that the work I do is not in vain. And so that is why I wake up the next day, sore and tired, and get up and do it again. Because the work doesn’t stop. Not until we achieve full liberation.”

“We are demanding the U.S. impose sanctions on Israel. Biden just approved another $735 million weapons sale while they were bombing Gaza and children. As Americans, we will no longer be complicit or silent”#March4Palestine DC Rally to #FreePalestine & #SaveSheihkJarrah pic.twitter.com/L1GErJlVke

Overwhelming majority of attendees on Saturday came to show support for Palestinians and to uphold the universal principles of justice and human rights. The crowd was very disciplined and it was obvious that they were deeply disappointed and infuriated by the ethnic cleansing of Palestinians sanctioned by the U.S. and other allies. People of all religious and non-religious background were present, and it was impressive to see that there were no symbols, signs and slogans of hate or antisemitism. The main focus was on Palestine and its right to exist in peace and dignity. There were many small group gatherings in the rally that spoke out on the killings of 67 Palestinian children including three Israeli children.

Secretary General of the U.S. Council of Muslim Organizations, Oussama Jammal said, “The clear diversity of the many thousands who participated in last Saturday’s march sends a strong message that Al-Aqsa Mosque goes beyond Palestine, it belongs to all Muslims around the world. It was obvious this time around in the Israeli-Palestinian conflict that Israel could not play the usual innocent victim. Major news agencies are breaking the silence and reporting the ugly reality of a long deceiving Israeli propaganda. More importantly, the young generations of Muslims and non-Muslims, Palestinians and non-Palestinians are in the forefront of activism for Palestine.”

Anthony Lorenzo Green, who is core organizer for Black Lives Matter DC, riveted the crowd, saying “I’m not just an ally. I am a comrade. Our struggles are connected.” He recognized past solidarity of Palestinian activists at Black Lives Matter speeches in years past.

Yesterday, our core organizer @LorenzoWard7DC spoke at the #March4Palestine. We remain committed as ever to fight for Palestinian freedom, safety, dignity, and self-determination. 🗣🇵🇸

“I’m not just an ally, I’m a comrade. Our struggles are connected.”#FreePalestine https://t.co/J6pgNzMGMo

“Beyond respecting both movements, there are people who are now showing up saying they are genuinely part of both movements. And within the U.S. and Europe, these people increasingly represent a greater majority of young, non-Palestinians and non-Blacks, who a.) understand that our government is complicit in the continued persecution of Blacks in America and of Palestinians in the Occupied territories, and b.) who are demanding that our government do better. That’s heartening,” Husain said.

The National March for Palestine was built on years of coalition work and increased civic engagement within the activist scene. Ismahan Abdullahi, who served on the organizing committee for the march and is the director of the Muslim American Society-Public Affairs and Civic Engagement (MAS-PAC) noted how the conversation is shifting.

“People’s eyes are wide open. We, as a community, are demanding more from those in positions of power. You can no longer be ‘Progressive except Palestine.’ You can no longer claim to be against systemic racism, xenophobia, Islamophobia, antisemitism, etc. without standing against the injustice faced by Palestinians. The landscape is shifting. Those who stand on the right side of history will be known,” Abdullahi said.

Dr. Osama Abuirshaid, Executive Director of American Muslims for Palestine, said in a statement, ”Millions of Americans around the country are joining to say that there must be an end to this ugly, immoral, and illegal status quo. We are here to assert that we cannot live another day under the status quo, which is one of apartheid, ethnic cleansing, occupation, violations of international law and the Palestinian people’s fundamental, inalienable rights to life of dignity, freedom, justice, and equality. It is unconscionable that the administration licensed a $735 million weapons sale to Israel last week despite the historic Congressional opposition in the aftermath of Israel’s cruel and deadly attack on civilians in the Gaza Strip.”

Using the hashtag of #March4Palestine, short form content creator and Palestinian activist Mo Mustafa of Gen Z for Change catalyzed scores of protestors from his one million TikTok followers.

WE NEED YOUR HELP!!! WE NEED TO GET #March4Palestine trending on Twitter! pic.twitter.com/dojVvQWxil

Maharoof, the student who captured the iconic shot of the protest, said she was “incredibly inspired” by the protest.

“We channeled the weight of our heavy hearts into our voices as we marched through the streets of Washington DC,” she added. “As I returned home from Saturday’s protest, I felt hopeful for the future of the Palestinian people – although there’s still so much to be done to ensure change is made, the energy of the thousands of protestors gave me hope that one day Palestine will be free.”