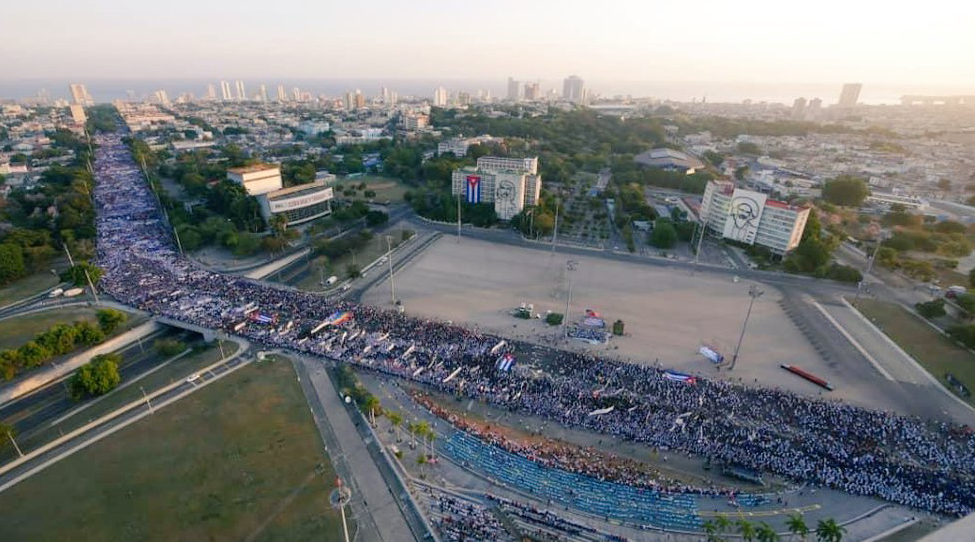 Over 5 Million People March On May Day In Cuba, A Country Of 11 Million

Led by the slogan, “Cuba Works and Lives,” Havana’s 2022 May Day parade was attended by more than 700,000 workers and students from across Havana, demonstrating both a joyful celebration and triumphant victory of the Cuban Revolution.

More than 5.5 million people celebrated throughout Cuba on May 1 in their respective provinces, for a total of 6 million people at events over the weekend.

It was a special celebration because of the parade’s cancellation the last two years due to COVID-19 restrictions. Cuba’s May Day parade is historically the largest in the world, and this year it came back with a roar in one of the largest turnouts seen in years.

Intense fuel shortages due to the U.S. blockade make transportation difficult — even so, people from all provinces of Cuba traveled to take part in this historic International Workers’ Day celebration.

Headlining the celebration were Cuba’s President Miguel Díaz-Canel, General of the Army Raúl Castro, General Secretary of the Cuban Workers Federation (CTC) Ulises Guilarte de Nacimiento, along with many other Cuban leaders.

As we walked in the early morning through Havana on our way to Plaza de la Revolución, we were joined by workers and their unions, teachers, students, soldiers, retirees and all sectors of Cuban society. The atmosphere was that of optimism and a joyful energy to finally be back celebrating May Day.

Leading the march was a gigantic banner 100-foot-long across, which read “Cuba Lives and Works,” followed by 50,000 doctors and scientists involved in the anti-COVID struggle and thousands of workers’ contingents in a solid, enthusiastic mass.

When asked how it felt to be back in the street after two years, 18-year-old Cuban Daniela said, “Well, it’s my first time celebrating May Day because I’m a university student and I feel happy. To be truthful it makes me feel good. I don’t know how to explain it, you have to experience it. You have to be here from the early morning and march through May Day to understand how it feels!”

About the U.S. blockade, she said, “I love my country very much. I adore it and any problems we have should be resolved within the country. I don’t think the U.S. should be interfering.”

The fact that millions of workers could march, even with the pandemic persisting, was made possible only by Cuba’s massive vaccination of the population and the dedication of Cuba’s scientists and medical personnel. This year’s May Day march is not only a celebration of the workers of Cuba and their revolution, but a celebration of Cuba’s renowned scientific and biotechnology prowess.

After unleashing the avalanche of 243 economic sanctions under the Trump administration — and maintained by the Biden administration — the U.S. government believed that it could destabilize Cuba’s revolution. However, the unity of millions of workers and students on May 1 in Havana, pouring into the streets in triumphant celebration of their revolution, exposes that belief as no more than a fantasy.

A revolution dedicated to the youth

Ulises Guilarte de Nacimiento, General Secretary of the CTC, had announced that this year’s May Day is dedicated, “in a particular way to our glorious youth, to young people as an element of continuity.”

At the Plaza, he said, “The international context in which we develop this celebration of the proletariat is complex and challenging. Hostility is growing and the economic, commercial and financial blockade imposed on us by the United States government, the main obstacle to our development programs, is intensifying to the extreme, together with a pandemic that maintains negative impacts in the economic, social and labor spheres … Faced with this panorama, Cuba does not stop. It implements policies to strengthen its economic actors and primary sectors of its productive base, the comprehensive transformation of its neighborhoods and the reduction of people in situations of vulnerability.

“We will not bend. Cuba lives and works for its present and for its future. We will defend our socialism as we did 61 years ago in the sands of Playa Girón (Bay of Pigs). For our heroes and martyrs. For Fidel and for Raúl. For continuity. For the younger generations. For our country. Let’s go forward with everything.

The dedication to the youth of Cuba is seen in every sector of Cuban society, but most remarkably in the handling of COVID-19. Cuba was the first country to vaccinate children two years old and up, and — under the protection of a highly vaccinated society — in November, Cuba opened up all schools and daycare centers.

In stark contrast, the U.S. government’s for-profit, capitalist approach to COVID-19: the banning of mask mandates in schools, forcing children back to school and workers back to work despite low vaccination rates across the country, and so on, now has the United States well on the road to one million dead from COVID-19.

A great showing of international solidarity

In a massive showing of international solidarity with Cuba’s Revolution, thousands of solidarity activists joined the historic march, coming from various left and progressive movements from around the world. Representing this international presence in the march was the international bloc, which was led by the International People’s Assembly delegation’s 50-foot long banner which read: “Build the Future, Break the Blockade!”

From the International People’s Assembly came the North America Youth Brigade — made up of about 100 youth leaders representing various social justice movements from all over the United States.

In addition, more than 1,500 delegates from 25 countries visited Cuba for May Day and participated in the traditional International Meeting in Solidarity with Cuba, held every May 2 since the first event in 1994. They also visited multiple workplaces: the biotechnology industry, a bus production factory, electrical plant, a non-state cooperative, among others.

Speaking to the importance of solidarity, Joshua Carson, Party for Socialism and Liberation member and participant in the Youth Brigade said, “This type of solidarity is important because it’s a visual way that Cuban people know that there is resistance inside the empire. They are not alone in this fight, and this period of suffering — which started in the Special Period of the 1990s — will be over one day.”

For those of us youth, who traveled to Cuba for the first time, on this historic May Day, it was beyond our wildest dreams — as we marched, we saw a workers’ celebration of hundreds of thousands, and we felt the vibrant Cuban people’s commitment to their revolution and socialism.