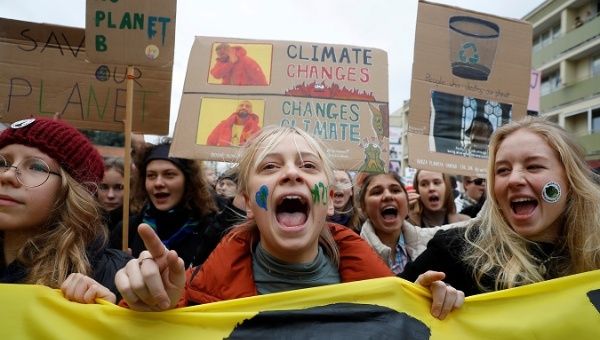 Over 5,000 Police Deployed To Monitor Climate Summit In Spain

Spain’s authorities have deployed over 5,000 officers to monitor the 2019 United Nations Framework Convention on Climate Change (COP25) to be held in Madrid from Monday.

While the Civil Guard will control vehicular traffic and airport security, the Defense Ministry will supervise air safety.

For its part, Madrid’s Municipal Police will control urban mobility and support government delegations in their movements.

This special surveillance reinforcement device, which is part of a level-4 alert, will remain until Dec. 14, as the Interior Minister reported.

This security device has been organized to control the presence of thousands of anti-capitalist activists, environmental defenders, and concerned citizens who are arriving from all over the world to demand that UN countries take concrete measures to halt global climate change.

In Glasgow today climate activists & the Chilean community join together for a day of solidarity, learning and organising together.

On Friday, November 29, thousands of people around the world once again went out to protest against forms of production and consumption that affect ecosystems and threaten life.

“We see no other options,” youth protesters told outlet Common Dreams ahead of the COP25 summit in Madrid.

“Countless negotiations have produced much-hyped but ultimately empty commitments from the world’s governments.”

On Friday, Australian students walked out of class saying that the bushfire crisis is a direct consequence of global warming.

“The wildfire, which has killed at least four people, burnt about 1 million hectares of farmland and bush and destroyed more than 500 homes,” Reuters reported.​​​​​​​

Indian govt/@narendramodi cancel @jairbolsonaro’s visit to #India as guest-of-honor during #RepublicDay. U cannot curb #ClimateChange if u join hands with a person who is raking up the #Amazon and releasing carbon into the atmosphere #NoBolsonaro #DontPolluteRepublicDay pic.twitter.com/OsceeniuhB

The UN Framework Convention on Climate Change (UNFCCC) conference is the most important multilateral political event whereby countries try to agree on solutions to the climate-induced transformation of global and local ecosystems.

The COP25 was initially scheduled to be held in Santiago. In mid-October, however, Chile’s President Sebastian Piñera announced that his country would not host the UN summit.

Spain then offered to take the place of Chile, a South American country whose citizens are protesting against the structural violence prompted by the political, social and economic status quo, which Augusto Pinochet’s dictatorship imposed in 1973.​​​​​​​