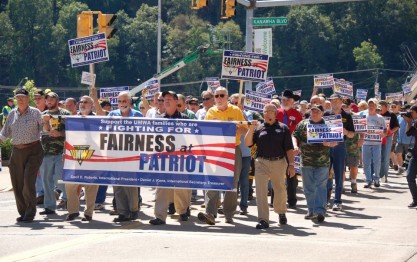 Charleston, West Virginia.  April 1, 2013.  They boarded buses and cars before dawn, some the night before, coming from the coalfields of Illinois, Pennsylvania, Kentucky, Virginia, Ohio, Indiana, and all across
West Virginia.  By 10:00 AM over 7,000 had packed into the giant Charleston Civic Center to voice their support for the 23,000 miners and their families who face the loss of their lifetime health benefits in a
bankruptcy scam.

In a series of mergers and deals, Peabody Energy and Arch Coal transferred their contractual health benefit obligations to Patriot Coal.  In St. Louis, Missouri, in March, 2013, Patriot Coal filed in bankruptcy court seeking to terminate the United Mine Workers (UMWA) contract and set up instead a Voluntary Employee Beneficiary Association (VEBA) for the retirees and families.

Patriot seeks to put only a pittance into the VEBA, vastly underfunding it.  UMWA President Cecil E. Roberts has said this plan would “put thousands of retired coal miners, their dependents or their widows on the
path to financial ruin, worsening health conditions or even death.”

The UMWA pioneered in healthcare benefits and pensions when they battled coal operators and the American Medical Association to establish the UMWA Health & Welfare Fund.  John L. Lewis and the union defied accusations of socialized medicine to set up miners’ clinics and built the miners’ hospitals that serve today as the backbone of health care in Appalachia. The UMWA won early retirement with family coverage for miners who retired before they were 65.  These achievements of the miners’ struggles are under attack by Patriot, Peabody, and Arch.  Most unions, following the lead of the UMWA, have negotiated early retirement with employers picking up the cost of health care until Medicare kicks in.  The attack on UMWA retirees is a snapshot of what employers have in store for union negotiated early retirement plans.

The miners’ fight is winning political support.  The West Virginia state Senate and House of Delegates have passed resolutions calling on Patriot Coal to meet its commitment to provide pension and health benefits to
miners.  Elected leaders are feeling some heat, judging by the number of the powerful who appeared at the Civic Center to express their support. West Virginia Governor Earl Ray Tomblin greeted the crowd.  “I’m from
Logan County the heart of coal mining…I’m honored to stand shoulder to shoulder with you for the benefits of our retired miners.”

Dan Kane, UMWA Secretary Treasurer spoke.  “To cast aside those who earned benefits through decades of back breaking labor is like taking money—it’s theft.”

Kane called for a Congressional investigation.  “Who’s looking into this conspiracy?  We will fight to protect our health care no matter what it takes.  We will follow these robber barons and we will shine the light of truth on these evil deeds.  We are on the right side of history.”

West Virginia Senator Jay Rockefeller appeared through a video.   “We must hold Peabody, Arch and Patriot to the promises they have made.”  He spoke of the introduction of the Coal Accountability and Retired Employee Act.

Representative Nick Rahall of West Virginia declared that “In 1912 Mother Jones said that the labor movement was a command from God Almighty.”  He said that the promise to the miners must be kept.  “No white flag…this is an uphill battle, but everyone here knows how to walk uphill.”

West Virginia Secretary of State Natalie Tennant described herself as a union member and said that this is an attack on all American workers.  “It happened at Century Aluminum to steelworkers.”  Tomorrow, she said it will
happen to many more until we stop “these fraudulent transactions.”

“We can’t let this stand.  This is an attempt to take away the health care that was won on your broken backs, on your black lungs and on the memories of your fellow miners who took their last breaths in the coal mines,”
Tennant said. “What’s worrisome is that tomorrow it can be an attack on construction workers, nurses, secretaries, teachers; who knows where it stops?”

AFL-CIO President Richard Trumka brought support from 12.5 million members of the AFL-CIO.  He said that when they dumped all the legacy costs onto one little company they knew it would fail.  He said that we’ve been
“living and working under the threat of vulture capitalism.”  He addressed Patriot, Peabody, and Arch, “You can’t use the courts to steal because we won’t let you.”

UMWA President Cecil Roberts concluded the indoor rally.  He said that 42 have already been arrested in St. Louis where the bankruptcy court is convened.  That includes all of the members of the International Executive
Board of the UMWA.  He spoke of the broadening of this movement with faith leaders from the United Church of Christ, the Episcopal Church, and the Catholic Church who would be joining today in non-violent civil
disobedience and arrest in protest against this moral outrage.  He recognized the Teachers, CWA, USW, UAW, and the many unions that were in the hall.

Roberts said “We know who did this –they are wearing $10,000 suits and Gucci shoes.  We know where they are.  We are going to be like Jesus who threw the money changers out of the temple.”

At the conclusion of his speech people moved in orderly fashion to march to the headquarters of Patriot at Laidley Towers.  When the front of the march arrived, the streets were still packed all the way back to the Civic
Center.  Many workers cheered from the steps of their office buildings.

Moms and dads sheltered the babies from the light rain and kept walking. The camouflage UMWA shirts read “We are Everywhere” and “No Health Care, No Coal.”

Before leading the group to sit down on the steps of the Laidley Towers, Cecil Roberts paid tribute to Rev. Dr. Martin Luther King who taught non-violent resistance to unjust laws.  Roberts said we must build a
movement that is more powerful than all of their money.  “We are over 7,000 today and we will be back with 20,000 and then 30,000.  If we can’t get justice in the court house, we will take it to the state house.  If we
don’t get justice there, we must take it to the streets.”

The powerful march and rally made the news not only in West Virginia but also in the Wall St. Journal, the St. Louis Post Dispatch, and across the country.

Throughout hours of speeches about health care, neither politicians nor labors leaders mentioned the Affordable Care Act (ACA), known as Obamacare, the health care reform that was passed in 2010.  Clearly the
ACA provides no remedy for the health care crises that workers and retirees face.

Only a national single payer plan, HR 676, Expanded and Improved Medicare for All, can provide the needed care.  By removing the private for-profit health insurance companies and hospitals through HR 676, the nation can save $400 billion a year yet expand care to all.

HR 676 makes the wealthy pay a larger share and stops non-union employers from being able to underbid unionized companies.  With HR 676 there will be no more profiting from the denial of care.

Until we can build the movement that can pass HR 676, everyone should join the battle to preserve the health care won through union contracts.  So do something to help the miners.  Ask your senators and congressperson to support the UMWA demands.

Sign the petition for the UMWA here:  http://www.fairnessatpatriot.org/
Check out the UMWA on facebook.  Watch for more demonstrations to come.