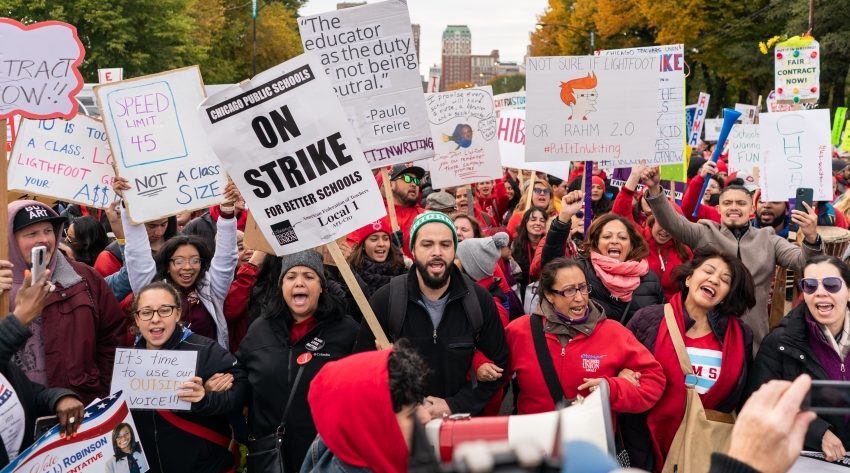 Over The Last Week, At Least 85,000 Workers Were Out On 13 Different Strikes

Above Photo: Striking teachers, school staff, and supporters march through downtown Chicago on the ninth day of the Chicago Teachers Union strike on October 25, 2019. (Photo by Max Herman/NurPhoto via Getty Images)

According to the Bureau of Labor Statistics, 485,000 U.S. workers were involved in strikes and lockouts during 2018. That’s the highest number since 1986. The data for 2019 won’t be released until 2020, but there’s a good chance that number will be exceeded, a point driven home by the fact that, over the last week, at least 85,000 workers participated in 13 different strikes across the United States.

The crest of the strike wave has primarily been ridden by school workers. About 26,000 Chicago teachers have now been on strike for 12 days, demanding that Mayor Lori Lightfoot be held accountable for her campaign promise to bolster support staff and decrease class size. The work stoppage has now lasted longer than the Chicago Teachers Union (CTU) 2012 strike, which ended up sparking its own strike wave.

“Hundreds of CTU members showed up for the Wisconsin uprising of 2010,” Chicago activist and striking teacher Kenzo Shibata told In These Times. “We learned what was possible and we continued organizing for our 2012 strike. Educators in West Virginia, Los Angeles, Oklahoma and Arizona cited us as inspiration for their strikes. The Solidarity is contagious. They’ve passed back that inspiration and we’re here as a boost of momentum to this teacher strike wave.”

On October 17, about 8,000 CPS staff workers in the city also went on strike, represented by SEIU Local 73, with union leaders reaching a tentative agreement with the city on October 27, which members still have to vote on. Workers are not back at school, however, as CPS remains shut down by the CTU strike.

In a show of solidarity, the local Teamsters union is refusing to cross the picket lines to make deliveries. “We stand behind the teachers union 100% and believe they should fight for every form of benefits and relief for the children they are seeking,” Teamsters Local 705 official Juan Campos told the Chicago Tribune.

In Mendota, Illinois, about 2 hours away from Chicago, 76 elementary school teachers went on strike October 16, looking for wages that are comparable to their neighboring districts. Classes resumed October 28 after members of the Mendota Education Association ratified an agreement.

In Dedham, Massachusetts, hundreds of teachers dealt the state its first teachers’ strike in 12 years, voting on October 24 to approve a walkout by a vote of 258-2. Teachers walked out the next day in defiance of a state order, as it’s actually illegal for public employees to strike in Massachusetts. The teachers had been working without a contract for over a year—and had attempted to negotiate one for almost two. They were looking for stronger health insurance and a contract that addresses sexual harassment.

“Right now there is a movement of workers across the country who are taking back their power at a scale we have not seen in recent memory,” tweeted Independent Vermont Senator and presidential hopeful Bernie Sanders on October 25. “I stand with educators in Dedham, Massachusetts. This takes courage.”

On October 27, it was announced that a tentative deal had been reached, and school resumed the next day. Details of the new agreement have not yet been released.

The teachers’ strike wave is also hitting the West Coast. On October 21, dozens of teachers called out sick in Berkeley, California—some of them doing so as part of wildcat strike that was unauthorized by their union, the Berkeley Federation of Teachers. The teachers have been working on an expired contract since the summer. “It was good old-fashioned organizing. It happened through the whisper network,” history teacher Alice Bynum told a local paper. They’re back at work now.

The current strike wave is certainly not limited to teachers. About two dozen sanitation workers for Republic Services in Marshfield, Massachusetts, have been on strike since August 29. They’re demanding affordable health care and a living wage. Teamsters 25, the union that represents the employees, cites Economic Policy Institute data which shows that the workers with one child are making 40% less than the state’s living wage. Republic Services’ biggest single shareholder is billionaire Bill Gates, who makes $100 million annually off dividends from his shares. Last month, two dozen of the striking workers protested outside of a Bill and Melinda Gates Foundation gala in New York City, holding signs that read, “Bill Gates treats kids like trash.” Striking employee Bernard Egan-Mulligan told New York Daily News, “We’re here because Bill Gates is a 32% stockholder in our company. We figure our shareholders would like to know what’s going on.”

The workers have now extended the strike into Indiana, as more than 70 Republic workers in Evansville have joined the picket line.

At least 50 bus drivers in northern Virginia, represented by Amalgamated Transit Union Local 689, are on strike in response to their garage being privatized as some of their services are now being contracted out. They’ve been fighting for a new collective bargaining agreement for months.

Around 1,700 ASARCO copper workers are on strike in Arizona, angry about pension freezes, health insurance costs, and a lack of raises. “For the past nine years, these workers haven’t seen a pay raise,” Teamsters Local 104 secretary-treasurer Karla Schumann told NPR. “They’re working in some of the most difficult and dangerous conditions out there, and it’s just unfathomable and untenable to do that to these guys.”

Roughly 75 workers at the luxury Battery Wharf Hotel in Boston are also on strike. UNITE HERE Local 26, who represents the workers, says its members are looking for higher wages, better pensions, protection for immigrant employees, and sexual harassment prevention. Earlier this month, the English singer-songwriter and activist Billy Bragg headlined a rally in support of the workers. “The strike at the Battery Wharf Hotel goes to the very heart of the problems in our society,” Bragg told Boston Magazine. “Working people feel they no longer have any agency over their lives.”

About 700 Service workers in Santa Clara County, California have been on strike since October 2. SEIU 521 filed more than 15 complaints of unfair labor practices leading up to the strike. In addition to complaints about poor working conditions, employees are upset with the decision to move the San Jose Family Resource Center, as well as an allegedly unsafe environment for children at the Receiving, Assessment and Intake Center.

On October 27, more than 50 fast food workers at Oregon’s Burgerville chain ended a 4-day strike after the company agreed to continue negotiations with the employees. The workers have been agitating for a living wage for the last 18 months.

The longest auto workers strike in 50 year just ended with 49,000 United Auto Workers (UAW) members returning to General Motors on October 26. The employees were able to secure small raises, partially phase out a “two-tier” wage structure, and win a better process for temporary workers to become permanent, but potential fallout and further unrest looms as the agreement includes plans to close down three factories.

Tim O’Hara is President of UAW Local 1112, where the Lordstown, Ohio plant is set to close. He told the local news that he felt betrayed by the vote. “We just wanted them to remember that what happened to us can happen to them ’cause there’s nothing in this contract that stops GM from showing up unannounced at their plant the Monday after Thanksgiving—for example, like they did to us—and telling them they’re done,” he said.

The new General Motors contract was announced just a day after over 3,600 UAW-represented workers at Mack Trucks ended a two-week strike as a result of a tentative agreement being reached.

More work stoppages could be on the horizon. Teaching assistants in Decatur, Illinois are set to strike for a new contract. About 4,000 mental health clinicians across 100 Kaiser Permanente facilities could go on strike in November over staffing shortages, and the Little Rock Educators Association has set up a fund in the event of a “collective job action.” At a recent meeting, Little Rock Education Association President Teresa Knapp Gordon said teachers didn’t want to strike, but they were prepared for anything if their current contract is allowed to expire. That’s the last thing we want to do,” she said, “But you can bet your bottom dollar that if that is what it takes to make sure our children are protected, then that’s what we will do.”