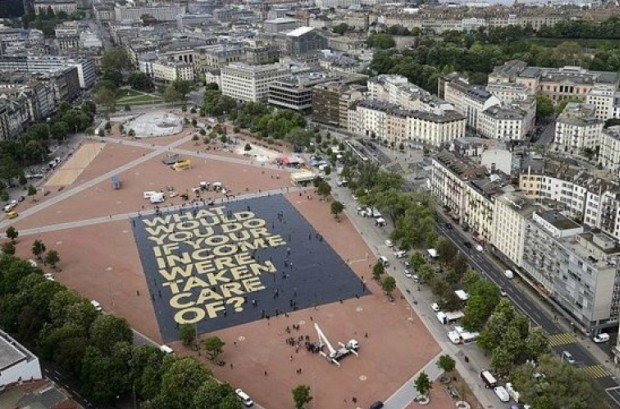 Overwhelming Evidence That A Guaranteed Income Will Work

Above Photo: A giant poster in Geneva reading “What would you do if your income was taken care of?” ahead of Switzerland’s vote on a proposed “basic income” set the Guinness World Record for the largest poster ever printed. (Photo: Fabrice Coffrini/AFP/Getty Images)

We’ll have to do something drastically different to employ people in the future. Our jobs are disappearing. The driverless vehicle is here, destined to eliminate millions of transport and taxi-driving positions. Car manufacturing is being done by 3-D printing. An entire building was erected in Dubai with a 3-D printer. Restaurants are being designed with no waitstaff or busboys, hotels with no desk clerks, bellhops, and porters. Robot teachers are interacting with students in Japan and the UK.

There are plenty of naysayers and skeptics, of course. The Atlantic proclaimed, “The job market defied doomsayers in those earlier times, and according to the most frequently reported jobs numbers, it has so far done the same in our own time.” But this is a different time, with no guarantees of job revolutions, and in fact a time of unprecedented machine intelligence that threatens the livelihoods even of doctors, teachers, accountants, architects, the clergy, consultants, and lawyers.

Most of our new jobs are in service industries, including retail and personal health care and food service. The only one of the eight fastest-growing occupations that pays over $33,000 per year is nursing — and even nursing may give way to Robotic Nurse Assistants. The evidence for downsized jobs keeps accumulating. A US Mayors study found that ‘recovery’ jobs pay 23 percent less than the positions they replaced. The National Employment Law Project estimates that low-wage jobs accounted for 22 percent of job losses but 44 percent of subsequent job gains. Business Insider, Huffington Post, and theWall Street Journal all concur: the unemployment rate is remaining low because of low-paying jobs.

We’re fooling ourselves by believing in a future with satisfying middle-class jobs for millions of Americans. It’s becoming clear that income should be guaranteed, so that recipients have the wherewithal and incentive and confidence to find productive ways to serve society.

Credible research overwhelmingly supports the concept. A World Bank analysis of 19 studies found that cash transfers have been demonstrated to improve education and health outcomes and alleviate poverty…concerns about the use of cash transfers for alcohol and tobacco consumption are unfounded. An MIT/Harvard analysis of seven cash transfer trials found “no systematic evidence that cash transfer programs discourage work.” The Brooks World Poverty Institute found that money transfers to the poor are used primarily for basic needs. Basic Incomes have been shown to lead to reductions in crime and inequality and malnutrition and infant mortality.

One of the earliest experiments with guaranteed incomes was the “Mincome” (minimum income) program conducted in the town of Dauphin, Manitoba during the 1970s. The results were never made clear, partly because of a change to a more conservative government, which put the program’s records in storage, unevaluated. One study, however, found improved health outcomes for the recipients of the basic income payments.

In the U.S., the Alaska Permanent Fund has thrived for 35 years, even with anti-socialist conservatives in power. Texas has long employed a “Permanent School Fund” to distribute funds from mineral rights to the public education system. Wyoming has used a similar “Mineral Trust Fund” to help eliminate state income taxes. Nebraska distributes low-cost electricity from a publicly owned utility. Oregon has used the proceeds from wind energy to return hundreds of dollars to households. Vermont has proposed “Common Assets Trust” to raise money from taxes on pollution and pay dividends to residents. A pilot basic income experiment is set to begin in Oakland.

Numerous Native American communities have instituted guaranteed income programs, both in the form of shared benefits from casinos and as “land trusts,” which recognize the common ownership of natural resources. Notably, according to a Duke Universityanalysis, the establishment of the Eastern Cherokee Indian Land Trust has resulted in fewer behavioral and emotional problems among the community’s children, relative to neighboring communities. In adulthood, recipients had less depression, anxiety, and alcohol dependence.

Even the concept of providing grants to homeless people seems to work. In both Utah and California, trial programs have led to stable living conditions for dozens of formerly homeless people, with few conflicts or behavioral issues within the communities, and at a significantly lower cost than the alternative of temporary shelters — especially if people without homes are given jobs, as in a new program in Albuquerque.

A 2005 program in Britain added support to the argument that the reduction of poverty promotes family stability, rather than the other way around. Efforts to increase family income, especially through work opportunities, resulted in “sharp and sustained decreases in material hardship for the most vulnerable families,” and, in the cases of households with children, more spending on family needs and less on alcohol and tobacco. A broader study of 18 European countries found “increasing employment commitment as social spending gets more generous” — in other words, dividend payments encourage people to work harder, rather than the other way around. NowFinland is readying a wide-scale guaranteed income program, and cities in theNetherlands are preparing similar experiments with such “basic income” payments. Despite an initial rejection of a basic income proposal, citizens of Switzerland continue toadvocate for a Guaranteed Income plan that would provide $2,600 a month tax-free to every adult, and $650 to each child.

A program in Uganda followed young people who were given cash grants with twice the typical annual income. After four years most had invested their earnings in vocations, causing their earnings to rise by 40 percent or more, an outcome that generally lasted well beyond the four-year study period. Women overall earned more than men. As summarized by the authors of the study, “The grants are typically invested and yield high returns…even among poor, unemployed and relatively uneducated women.”

In Namibia, a two-year program yielded remarkable results, reducing poverty from 76% to 16%, child malnutrition from 42% to 10%, and school dropout rates from 40% to almost zero. A Unicef-funded study in India recorded the same positive health effects, with particularly noticeable improvements among the disabled population.

The charity Give Directly, which has been highly rated by the charity research organization GiveWell, provided cash transfers to poor rural households in Kenya. Results showed increased spending on food, medical needs, and education, with very little used for alcohol and tobacco, and with similar outcomes for both males and females. According to the authors of the study, “Transfer recipients experience large increases in psychological well-being.”

Almost Everyone Likes the Idea

The Guaranteed Income concept is not a left-right issue, it is not welfare for the poor or the rich, it is not blessing or bane to any exclusive segment of America. Whereas liberals see it as a means of lifting millions of Americans out of poverty, many conservatives and libertarians endorse it as a means of decreasing government intervention and promoting individual choice in spending decisions. Individuals as diverse as Milton Friedman, Martin Luther King, and Charles Murray have all promoted the concept.

Perhaps most importantly, a guaranteed income could relieve some of the pressure on our newest generation of young adults, who are deep in debt, underemployed, increasingly unable to live on their own, and ill-positioned to take the entrepreneurial chances that are needed to spur innovative business growth. A recent Gallup poll found that nearly 70% of workers don’t feel ‘engaged’ (enthusiastic and committed) in their jobs. A guaranteed income will offer young people the freedom to choose appealing work. No other group of Americans could make better use of an immediate boost in income.

Several ways have already been suggested, and the extended list, detailed at You Deserve Facts, includes: