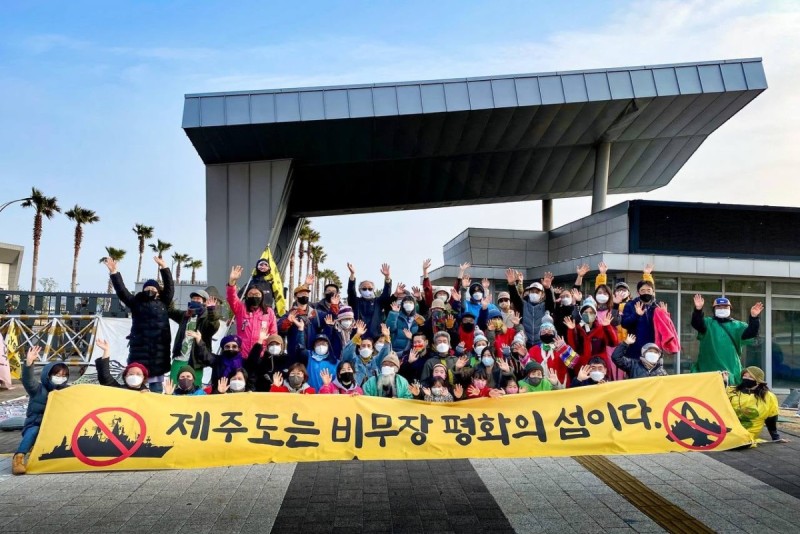 For Indigenous Pacific Islanders, US Militarism Remains Front And Centre In Their Fight For Sovereignty And Peace.

Peace activists around the world are mounting a global campaign to stop massive naval maneuvers in the Pacific. And Canada is in their sights.

Last month, two Canadian warships, HMCS Vancouver and Winnipeg departed Esquimalt naval base heading for San Diego and then Hawai’i to participate in the Rim of the Pacific (RIMPAC) war maneuvers scheduled from June 29 to August 4.

Just as the Canadian warships were departing Esquimalt, activists in Hawai’i gathered at Kailua near the Marine Corps Air Station on Kaneohe Bay to protest the impending visit of the RIMPAC warships, including Canada’s.

According to the US Pacific Fleet, this year’s RIMPAC war rehearsals began on June 30 and will continue until August 4. It will be the largest maritime war exercise in the world with “26 nations, 38 surface ships, four submarines, nine national land forces, more than 30 unmanned systems, approximately 170 aircraft and more than 25,000 personnel participating.”

The goal is to enhance naval collaboration for the US proposed agenda of “a free and open Indo-Pacific.”

RIMPAC war rehearsals are not new. They began in 1971 when the US was desperately seeking allies to counter its mounting losses in its aggressive war in Vietnam. Participation in what became biennial war exercises has varied over the years.

RIMPAC 2022 comes at a sensitive moment when the US and its allies have stepped up provocative actions in East Asia, aimed mainly at the People’s Republic of China, a rising power that seemingly challenges US hegemony in the Pacific.

However, for many people including Indigenous Pacific Islanders, US militarism remains front and centre in their fight for sovereignty and peace.

Indigenous Hawaiians, or kānaka maoli, have been actively pressing for sovereignty and an end to US military occupation for years.

RIMPAC first gained notoriety as it participated with the US in the blanket bombing of the sacred island of Kaho’olawe near Maui, Hawai’i in the 1970s and 1980s. This led to a major movement to protect Kaho’olawe that eventually resulted in an important victory for the movement Protect Kaho’olawe Ohana in the 1990s.

Indigenous activist Walter Ritte who occupied the island for 35 days in defiance of the US military recounted—“Aloha ‘Āina defeated the United States military.” Ritte’s use of the term Aloha ‘Āina refers to the kānaka maolis’ respect for the land and sea that sustain all living creatures.

Aloha ‘Āina has now motivated others in the Pacific. Peace activists on Jeju Island, just south of the Korean peninsula, also gathered recently to protest the dispatch of south Korean naval vessels to the RIMPAC 2022 war games. Their banners are typically inscribed with the term Aloha ‘Āina—one they learned from their visits to Hawai’i.

Women’s Voices Women Speak, also based in Hawai’i, is mounting a major campaign against RIMPAC 2022 as part of its activities with the Pacific Peace Network. This includes a petition to cancel RIMPAC 2022 and build a Pacific Zone of Peace.

In New Zealand, Cancel RIMPAC coalition member Marco de Jong called for New Zealand to withdraw its navy tanker HMNZS Aotearoa from the war games and participate in alternative security arrangements for the region including the Pacific Island Forum. “New Zealand draws its international standing from its place and influence in the Pacific. Playing American lapdog is equivalent to authoritarian apologist and jeopardizes New Zealand interests.”

The upsurge in protests against RIMPAC 2022 is largely a result of the activities of the Pacific Peace Network that includes Guåhan, Jeju Island, South Korea, Okinawa, Japan, Philippines, Northern Mariana Islands, Aotearoa (New Zealand), Australia, Hawai’i and the United States.

Former army colonel and US diplomat turned peace activist, Ann Wright is also playing a major role in networking the actions against RIMPAC 2022. In Canada, the Canadian Voice of Women for Peace and the Women’s International League for Peace and Freedom have endorsed the petition calling for the cancellation of RIMPAC 2022.

Is Rimpac Really Nato In Disguise?

Some commentators see RIMPAC 2022 as an expansion of NATO into the Pacific. However, close analysis of the participants suggests that RIMPAC 2022 remains a Pacific-based coalition the core of which is the Five Eyes allies of the US, the UK, Australia, New Zealand, and Canada, plus the Republic of Korea and Japan.

Participating from the Global South are Brunei, Chile, Colombia, Ecuador, India, Indonesia, Malaysia, Mexico, Peru, the Philippines, Singapore, Sri Lanka, Thailand, and Tonga. However, this is not the first time RIMPAC has had expanded participation. In fact, the US invited China to participate in RIMPAC in 2014 and 2016, but in 2018, it disinvited China.

Certainly, US allies such as Denmark, France, Germany, Israel, the Netherlands are participating in this year’s RIMPAC, but of these, only France has deployed a frigate, part of its continuing colonial presence in French Polynesia.

No doubt the US administration wants to involve NATO or some members of NATO in the Pacific. At its Madrid summit in June, NATO adopted a new Strategic Concept in which it specifically targets China as a threat, in line with current US policy.

The recent AUKUS (Australia-UK-US) initiative to provide nuclear submarines to Australia is another such initiative, openly acknowledged as an attempt to “shift the military balance in the Indo-Pacific.”

However, projecting the NATO alliance into the Asia Pacific is far from simple and in some senses is a non-starter. Asian nations have long memories and the legacies of European colonialism in Asia are not easily forgotten. Some Asian nations still look to the US as a security blanket against rising China, but they also know that their economic future is tied to that of China.

As for Canada, the government may be aligning itself with the US military in the Asia Pacific, but it must also contend with an evolving and complex situation. The recently announced formation of an Indo-Pacific Advisory Committee to advise the government reflects ongoing challenges in developing a coherent foreign policy in regard to China and the Asia Pacific.