Above Photo: From News.trust.org

As the trend has taken off, so has a debate over whether light projection constitutes a new form of property trespass

WASHINGTON, June 10 (Thomson Reuters Foundation) – The plan of action was nothing new; its outcome was.

Soon after sundown, the activists made for the heart of the U.S. capital, set up a powerful projector then shone a giant, illuminated message onto the dim flank of a government building.

“Discrimination is wrong” read the giant letters projected onto the side of a Congressional office building.

What happened next was a first for the activists and helped ignite debate about whether light projection equals trespass.

“A sergeant rolled up and said we were under arrest,” said Robby Diesu, who was manning the projector in the Capitol Hill neighbourhood, part of a collective called D.C. Action Lab.

“I’ve had numerous interactions with the Capitol Police and have never had one just arrest me,” the 31-year-old told the Thomson Reuters Foundation as he recounted his March arrest.

Light projection as a form of art and means to protest has been on the rise over the past decade as the technology has become more affordable. Used also for mainstream advertising and high-impact entertainment stunts, it appeals to activists who want to convey a big message quickly, effectively and cheaply.

Since Donald Trump became president and galvanised grassroots protest, light activists have focused their anger on Washington, D.C. – “protest capital of the country” – said Diesu, who guessed he had been involved in some 300 projections.

As the trend has taken off, so has debate over whether light projection constitutes a new form of property trespass, or even amounts to a “light invasion”, as one court wrote.

For Diesu, who said activists take care to stay on the right side of the law, the situation seemed preposterous.

“We’ve projected on the Supreme Court, various embassies, other agencies and private enterprises … and it’s never been a problem,” he said.

“This question about trespassing — that just seems silly,” said Diesu, who was not charged in the March incident. “With projection, I just turn it off, and it’s gone.” 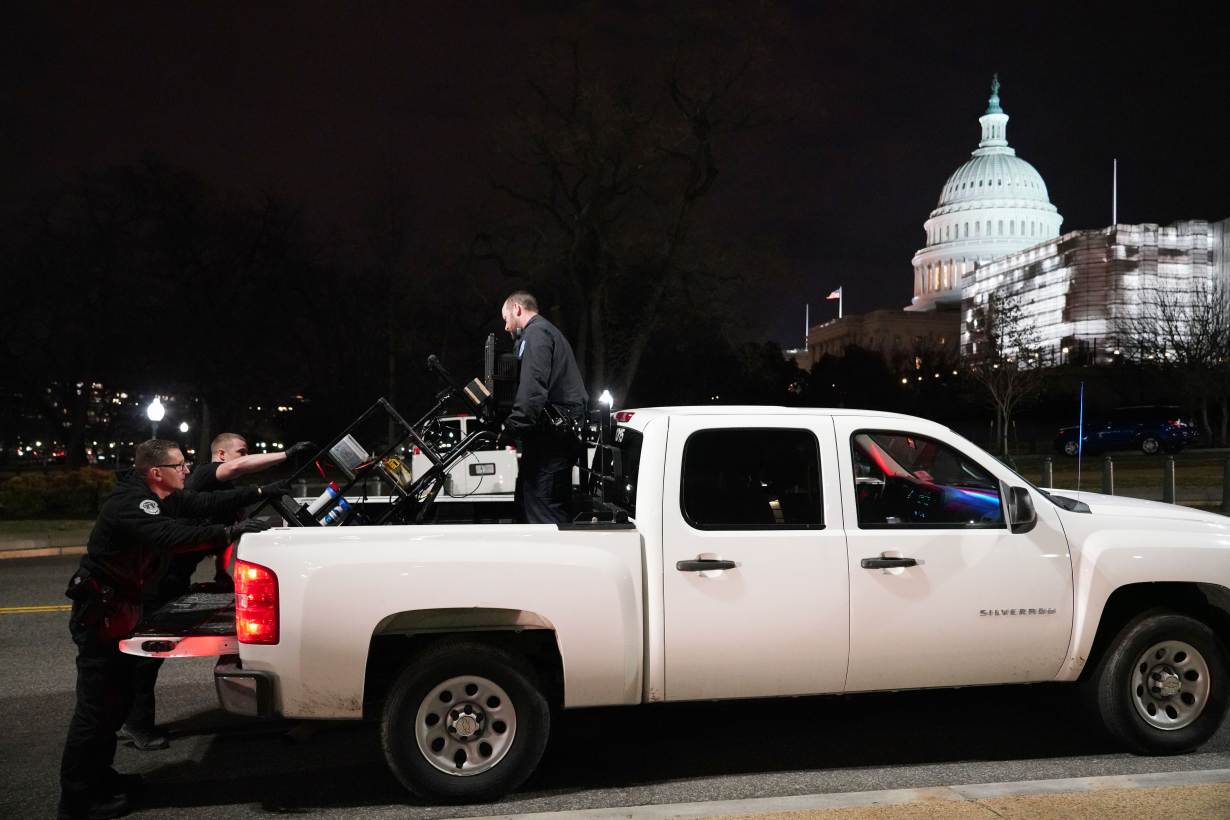 In the United States, the use of light projection for protest purposes started to take off in 2011, with the rise of the left-wing Occupy Wall Street movement.

A half dozen people outfitted a cargo van with a projector as a “propaganda tool”, said Emily Andersen, a member of the Illuminator, as the group is known today.

She said the van would drive around beaming “99%” — a reference to perceived economic inequality and a call to join the months-long demonstration, which soon spread nationally.

“From there, the messaging got better or more pointed, and then other groups would get involved and wanted to use our projection to further their causes,” she said. “So now we get involved in a variety of issues to raise awareness.”

The van would stop and project rather than move, or members would use folding tables for projections, she said.

They now teach fellow activists, unions and groups on college campuses how to project.

But the legality remains unclear, and in some instances, members were arrested or had equipment confiscated.

“I never know when we’re going to get shut down,” she said. “It’s hit or miss. Most of the time, we’ll be asked to move along.”

The key figure in the capital, Robin Bell, also got going in 2011, but ramped up significantly after the election of Trump.

The first projection that made big waves was in 2017, when he and others projected “Emoluments welcome” on Trump’s luxury downtown hotel, a reference to a debate over whether the president was benefitting financially from his position.

At first, he would carry a letter from a lawyer saying that as best as they can tell, they were within their rights to project light. But the letter’s tentative tone speaks volumes.

“There really isn’t a definitive answer to where it begins and ends, and that’s what we’re literally figuring out now: How do we communicate in a public space, and how do we do that with this specific technology?” Bell said.

The technology did not exist when the laws were written, but Bell saw “little difference between me standing in front of the Supreme Court and holding a sign, versus projecting on a wall.” 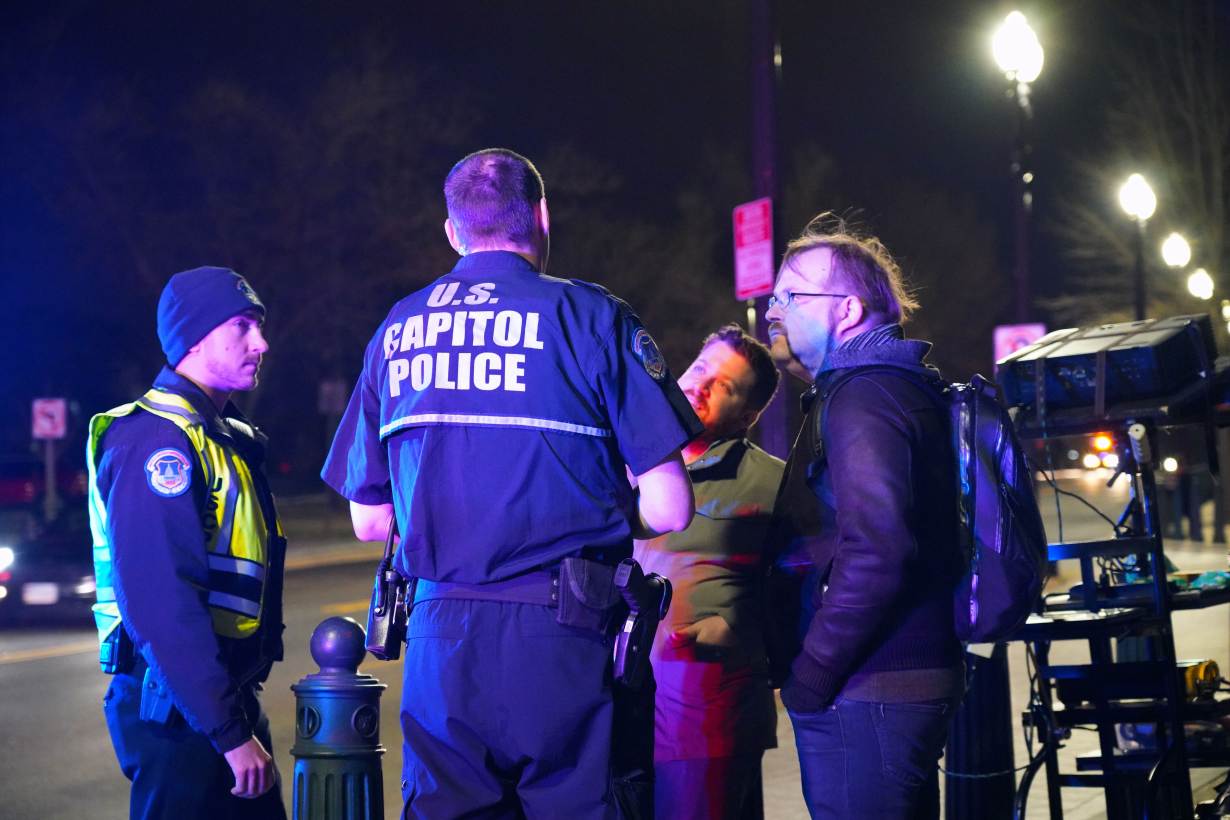 Police talk with activists about their light projection work on Capitol Hill in Washington, D.C., on March 13, 2019. Handout photo by Liz Gorman

“There really is a need for guidance here,” she said, noting that social media was awash with confused activists.

As yet, there have been surprisingly few legal decisions dealing with what is an increasingly common issue, she said.

Most legal thinking has been guided by a 19th-century opinion that stemmed from a raucous party, in which the court found that unless light was sufficiently harmful to sleep or damaged buildings, it was not legally actionable.

Other cases have established that people should be able to control what message their property communicates, and that free speech does not mean people can speak from another’s property, potentially including that of the government, Brady said.

In a key case from 2016, a court ruled that union members who had been projecting messages onto a business amid a dispute were not trespassing.

Brady notes that property law offers another route for clarification: whether the action can be considered a nuisance.

Either way, she expects legislation or more legal cases that will offer greater clarity on the issue in the next few years.

For now, the arrest has left a minor – if lasting effect.

“We’re going to avoid Capitol Hill to a certain extent,” Diesu said. “But the night we got the equipment back, we were out projecting again — it won’t stop us overall.”