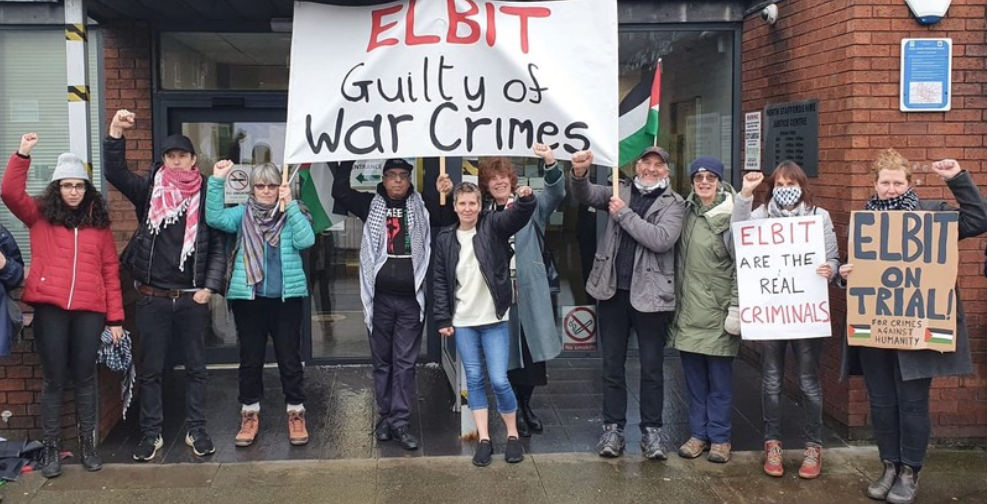 United Kingdom – Three activists who defaced an Israeli drone engines factory in the UK were found not guilty of criminal damage on Monday.

Palestine Action co-founder Huda Ammori told The Electronic Intifada that the victory showed they were on the right track.

“We’re going to continue to take direct action in order to shut down and undermine Israel’s arms trade,” she said.

It was reassuring to have court backing for taking action against Israeli arms makers, she added, and that “to disrupt them and throw red paint over their buildings is something that’s perfectly within our rights to do.”

Newcastle-Under-Lyme Magistrates Court awash with Palestinian flags and support for the Palestinian people during the trial against Elbit #ShutElbitDown pic.twitter.com/AS3NczWkk4

Government prosecutors had brought charges against what had become known as “the Elbit Three” after they took action in January against the UAV Engines factory, an Elbit subsidiary in Shenstone near Birmingham.

The group chained factory gates to disrupt business as usual and splattered the building with blood-red paint.

Despite all this, the court on Monday acquitted the three of criminal damage.

Their lawyers – including Palestinian barrister Mira Hammad – successfully argued that while their actions constituted damage to the factory, it was not criminal damage, since it was proportionate action to prevent a much bigger crime in Palestine – that of Israeli violence against Palestinians such as the May war against Gaza.

Judge Marcus Waite said that prosecutors had not shown that conviction would be proportionate with the defendants’ freedom to protest, Palestine Action said in a statement.

Since it was founded last year Palestine Action has carried out a sustained campaign against British subsidiaries of Elbit, Israel’s largest private arms maker, including sit-ins, defacement and sabotage.

Did you know? Today's action is our first in Wales! 🏴󠁧󠁢󠁷󠁬󠁳󠁿 Today, our mission to #ShutElbitDown is supported by the Welsh Underground Network, a group employing community and direct action in pursuit of a socialist republic in Wales ✊ @WelshUGN pic.twitter.com/m5UkQqmovW

Despite the fact that Palestine Action have, according to British police, so far caused more than $22 million worth of damage, the “Elbit Three” was the first case to come to trial.

A similar case collapsed in January last year when prosecutors dropped it after Elbit declined to make disclosures about its activities in the UK.

Six other campaigners face uncertainty over their case coming to trial, which has repeatedly been delayed.

Ammori said their trial has now been widened to a 4-5 week hearing scheduled for October 2022.

It’s just one of a dozen similar cases currently pending. Ammori said that the next is scheduled for January, but she doubts it will go ahead as planned, since the UK government’s Crown Prosecution Service has a long record of delaying such cases by a year or more or even and dropping them altogether.

Elbit boasts that it supplies some 85 percent of Israel’s drone fleet and habitually advertises its weapons as “combat proven” – in other words, tested on Palestinians.

Palestine Action activist Sarah said in the group’s statement following the not guilty verdict on Monday: “Throwing this paint may not protect Gaza. What protects Gaza is stopping the bombing. Elbit produces weapons, tanks and drones used to commit crimes against humanity and this is what is unlawful.”

UAV Engines did not reply to a request for comment.

Editor’s note: This article initially confused two different Palestine Action protests against the Shenstone factory. In fact the “Elbit Three” case was over a lock-on protest in January, not the rooftop protest in February as previously stated. This has now been corrected in the text above.