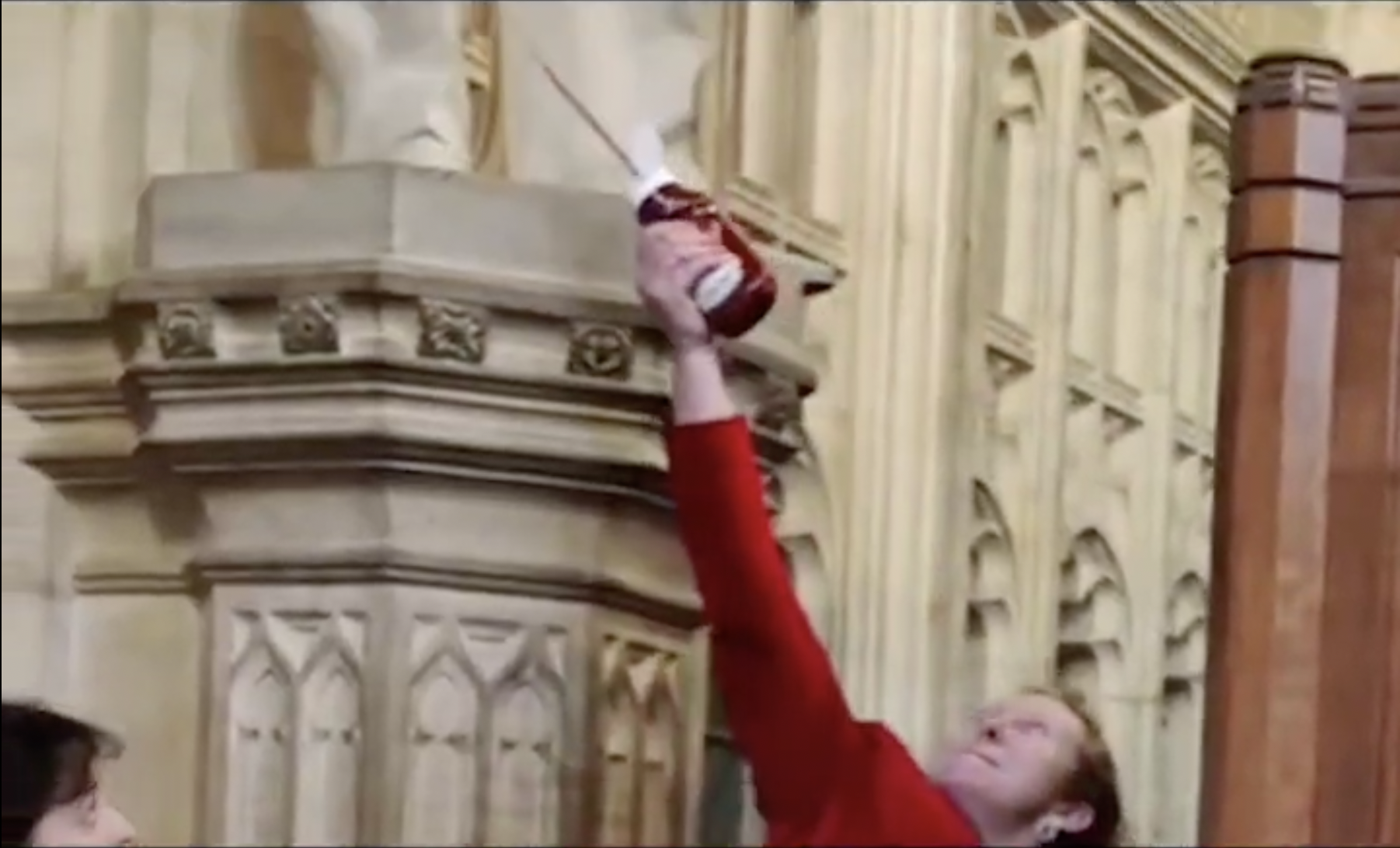 Palestine Action Deface Balfour Statue In The House Of Commons

London, England – In an unprecedented move, Palestine Action struck at the very heart of government to deface the “commemorative” statue of former Prime Minister Lord Arthur Balfour — the colonial administrator and signatory of the Balfour Declaration. Activists evaded security to gain access to the House of Commons Private Members Lobby in the Palace of Westminster in London.

Once inside, the group doused the statue in fake blood & unveiled the Palestinian flag, before gluing themselves to the plinth to state their intentions: “Palestine Action won’t stop until British complicity does” said one activist. Security quickly evacuated the lower lobby to prevent onlookers watching, hearing or filming the event.

This latest action coincides with the 105th anniversary of Balfour’s Declaration. Written in 1917, the document was issued during the First World War consisting of just 67 words. It promised to build “a national home for the Jewish people” in Palestine.[1]

“105 years ago, Arthur Balfour gave away the Palestinians’ homeland — a land that wasn’t his to give away” said one of the activists.

After the Declaration, until 1948, the British burnt down indigenous villages to prepare the way; with this came arbitrary killings, arrests, torture, sexual violence including rape against women and men, the use of human shields and the introduction of home demolitions as collective punishment to repress Palestinian resistance.

The British were initiating the ethnic cleansing of Palestine, fulfilling the Zionist aim to build their ‘home’ over the top of what were Palestinian communities, towns, villages, farms and ancestral land, rich in heritage, culture and ancient archeological history.

The Palestinians refer to this time as the Nakba — which translates into the great catastrophe. In 1948, the Zionist militia, trained by the British, forced over 750,000 Palestinians into exile, destroyed over 500 villages and forced those who remained to live under a brutal reign of occupation.

Elbit Systems, Israel’s largest arms supplier, was created out of a need to further arm and sustain the occupation. Today, captive Palestinians in Gaza are used as a human laboratory to develop Israeli weapons, marketing them as battle-tested before selling them on to the world’s most notorious dictatorships.

Elbit uses Britain as a manufacturing outpost, building weapons in factories and offices across the country. Two of its sites have been shut down this year by Palestine Action, including their Oldham factory and London headquarters. The two closures are testimony to the work of their committed activists, the sacrifices they make and the success of systematic direct action as a victorious method of attack.

“The British government in 1917, and every single one since, has profited from the crimes it committed 105 years ago, and is still committing to this day — from troops on the ground, to arming from afar, complicity didn’t stop. Palestine Action will make sure it does.”