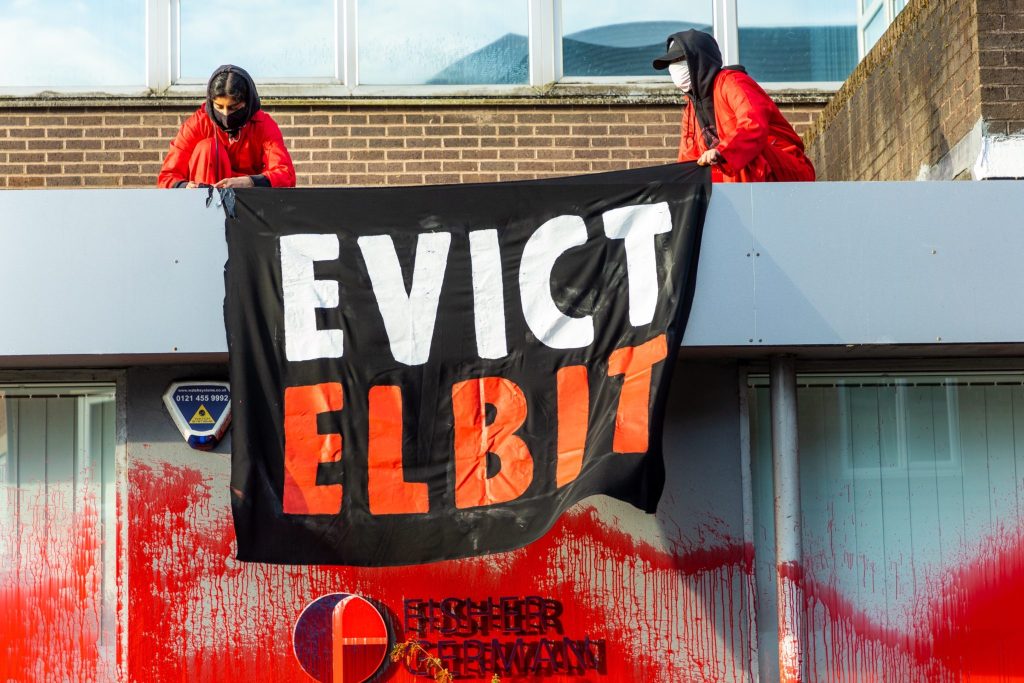 This morning, Vine Property Management in Birmingham was taken over and shut down by Palestine Action, with the action calling for an end to the firm’s continued facilitation of Elbit Systems and, by extension, of Israeli war crimes. Three female Palestine Action activists stormed the site at 6:00am on Monday 5th July, who have since chained the gates of the site shut, sprayed premises in blood-red paint, and are preventing any operations by occupying the roof of the building.

UAV Engines Ltd in Shenstone has been targeted and occupied 5 times by Palestine Action in the 12 months since the direct action network was launched, with the critical site of drone manufacture having been shut down for multiple weeks in total with significant losses and damages. Palestine Action pledge that the campaign of direct action taken to shut Elbit down will continue to escalate and expand – both by preventing operations and occupying Elbit sites, or by cutting off Elbit’s supply chain and halting operations as Elbit’s partners, landlords and suppliers are targeted.

Vine Property Management, who merged with Fisher German in 2019, handle the operations, oversight and maintenance of the UAV Engines factory in Shenstone, Staffordshire, thus contributing to war crimes committed against Palestinian people by enabling the manufacture of lethal Hermes military drones. The Hermes is said to be the ‘backbone’ of the Israeli Military’s surveillance and targeting missions, while also being used to carry missiles and bombard Palestinian civilian targets in Gaza. UAV Engines also produce engines for the Watchkeeper surveillance drone, manufactured for repressive purposes for the UK military and border force who have deployed them in Afghanistan and the English Channel.

This action comes as part of a wider Palestine Action campaign against Elbit’s suppliers, landlords or other partners. Palestine Action are shutting these complicit firms down, exposing their contribution to Israeli apartheid and the brutal repression of Palestinian civilians, and demanding that they cease their working relationship with Elbit Systems. Previous action taken over the past month includes targeting Elbit’s suppliers such as APPH in Runcorn, and their factory and office landlords Jones Lang LaSalle, LaSalle Investment Management, and Sedgemoor District Council. The premises of Jones Lang LaSalle alone have been targeted over 20 times by Palestine Action.

A Palestine Action spokesperson has stated:

“The production of arms, drones, and military technology relies on an interconnected and massive network of complicit firms – Palestine Action are dismantling this network, demanding that firms cease their partnership with Elbit unless they want to be shut down along with them. The message to all other firms with Palestinian blood on their hands is simple: until you end your facilitation of Israel’s brutal repression of Palestinians and sever ties with Elbit, Palestine Action will shut you down and cease your contribution to genocide for you.”