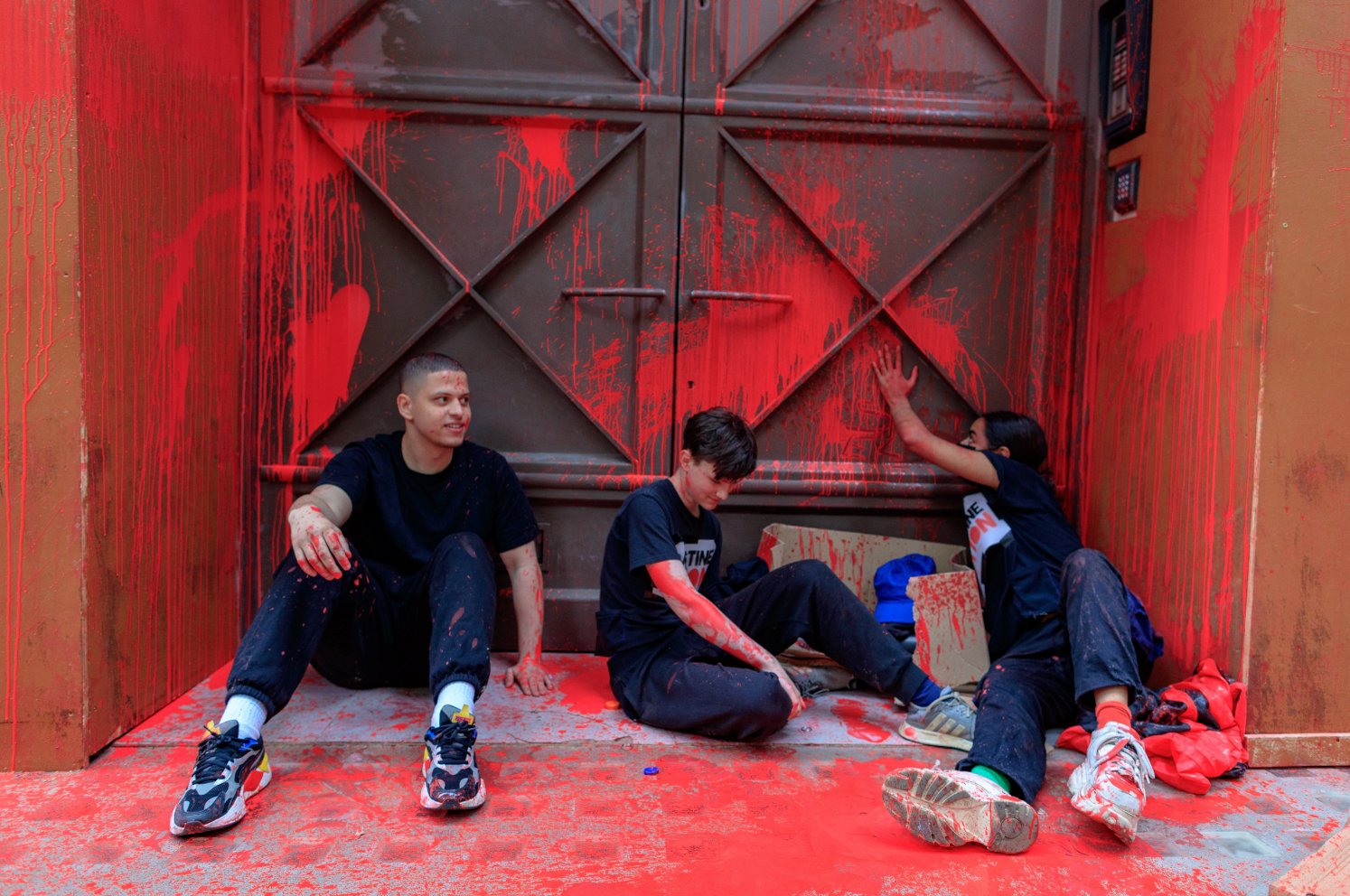 This morning, three activists have shut down the London headquarters of Israeli weapons company Elbit Systems.

The trio have left the site dripping in red paint, representing Palestinian blood spilt by Elbit’s trade – the company produces drones and ammunitions.

Another action has taken 77 Kingsway, the London headquarters of Elbit Systems – Israel’s largest weapons company. Three activists took to the site, two securing themselves to the site entrance with a lock-on, and all three soaking the building in red paint. In doing so, the trio have shut down the site for the day, leaving the company headquarters unable to operate. Today’s action marks the fifth time in just over a month that 77 Kingsway has been targeted by Palestine Action, our activists making clear that war criminals are not welcome in Britain.

Alongside recent actions at Elbit’s London headquarters, in the past week, two covert actions targeting JLL (who lease a number of sites, including 77 Kingsway, to Elbit) have been carried out by activists, calling on the real estate company to “Evict Elbit”. This past Sunday (Nakba day – marking 74 years of the Israeli occupation), Elbit’s Bristol headquarters were occupied and heavily damaged by 9 Palestine Action activists. In a blatant attempt at intimidation by the CPS, the crew were subsequently placed on remand, suggesting an increasingly-desperate Elbit. 3 remain in prison, and Palestine Action call on its supporters to attend their hearing at Bristol Crown Court on Monday 23. We firmly and resolutely say this – the actions don’t stop ’til the Nakba stops.

Elbit holds 9 sites in Britain – several factories, several RAF sites and its two headquarters which have both been targeted in the past week. The role Elbit plays in upholding the Israeli occupying forces is vital – for instance, Elbit supplies the Israeli military with the majority of its drones and ammunitions. Elbit’s drones are used frequently for murder and surveillance and were last year used extensively in the bombardment of Gaza.

As actions have increased at Elbit’s HQ in Holborn, in the neighboring borough of Hackney the local police force hosted a delegation of Israeli police. In the past week, Israeli occupation forces have brutalized the funerals of Shireen Abu Akleh and Walid Al-Shareef – in moments such as these, we have seen the vicious repression tactics and mentality of the Israeli occupying forces. The export of Israel’s violent methodology is a frequent occurrence. At the same time, the state seeks to jail Palestine Action members struggling against Elbit, whilst obscene violence from Elbit security becomes more frequent. Alarming developments such as these call for heightened resistance in the face of repression, intimidation and militarization. The campaign’s use of sustained direct action will continue until Elbit is brought crashing down.

Palestine Action pose a very real, very tenable threat to Elbit Systems, and by extension, Israel’s military dominance. The weapons company arms the Israeli occupation forces to the teeth, and for that reason we will continue to make business impossible for Elbit. The Elbit 9 – 6 of whom have been released, whilst 3 remain in jail awaiting trial, are testament to the strength of spirit held by our movement. We will continue to resist, until the last factory has closed its doors for good.