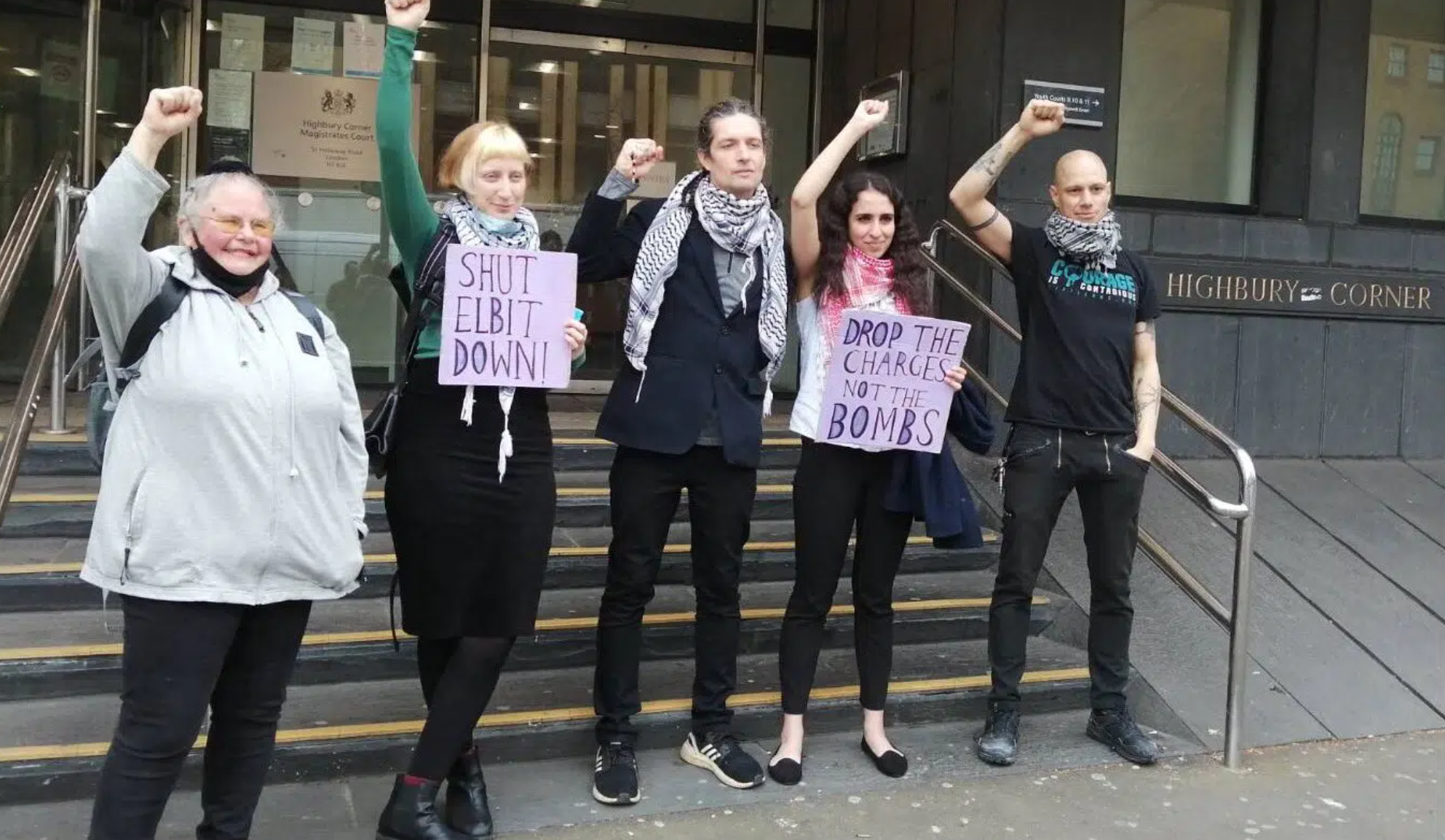 Beginning October 10th, the #ElbitEight will be on trial at Snaresbrook crown court, for an expected 5 weeks.

Palestine Action will be entering the courts in opposition to Elbit Systems, Israel’s largest arms company, hoping to prove that #ElbitIsGuilty.

On October 10th, eight Palestine Action activists (including cofounders Huda Ammori and Richard Barnard) dubbed the ‘#ElbitEight’ will be facing trial at Snaresbrook Crown Court. The trial is expected to last five weeks and includes charges of burglary, criminal damage and blackmail, pertaining to actions spanning the first six months of Palestine Action.

In this timeframe the accused activists helped to spark Palestine Action, the direct action network that has successfully shut down both a factory and headquarters belonging to Israel’s largest arms company, Elbit Systems. Palestine Action have dubbed it their “biggest legal battle to #ShutElbitDown to date, offering up the chance to expose Elbit in the courts and prove that #ElbitIsGuilty”.

Elbit Systems holds an extensive international clientele, boasting a number of flagrantly violent governments involved in frequent human rights abuses; Brazil, India, and the Phillipines, to name a few. However, being Israel’s largest arms company, a majority of its sales are to Israel. In Britain, Elbit produces the Hermes 450/900 and Watchkeeper UAVs – which go on to make up the 85% of Israel’s drone fleet. It was the Hermes 450 used in attacks on Gaza that, earlier this month, left almost 50 Palestinians dead. It was also used on Gaza in 2021, 2014, and even further back – ‘mowing the grass’, as Israeli military officials call it. Its use laid the foundations for Elbit’s Watchkeeper UAV.

Thousands of hours of ‘testing’ (in Elbit’s own words) on Palestinians, as well as Iraqis and Afghans, made possible the Watchkeeper drone – utilised by the UK Border Force and British Police, for the surveillance and monitoring of migrants and citizens respectively. The crimes of Elbit Systems are manifold, and on October 10, a long-awaited process of justice concerning these war crimes will begin, helmed by Palestine Action and the Elbit Eight.

The actions featured in the case took place at Elbit Ferranti (Oldham factory) and 77 Kingsway (London headquarters) – both of which are now permanently closed, as well as JLL (who leased Kingsway to Elbit), Instro Precision (Kent) and UAV Engines LTD (Shenstone). These actions were in essence what launched Palestine Action, the direct action network which has pushed hundreds in Britain to face arrest and loss of liberty for the Palestinian struggle.

The charges being levelled amount to a severity that no direct action group in Britain has seen in a number of years, with three activists including cofounders Huda and Richard facing a potential 14 year sentence for blackmail charges (it’s worth noting there are no sentencing guidelines for blackmail). The heavy blackmail charges surround JLL, the real estate company who held the lease to 77 Kingsway and faced action in the campaign to #EvictElbit.

Richard, Huda and Milly are each being charged with blackmail, owing to letters sent to JLL promising action if the lease was not cut, a tactic commonly used by protest groups. The maximum sentence for blackmail is 14 years. Alongside this is the possibility of a Serious Crime Prevention Order, which would prevent the accused from engaging in political campaigning relating to Palestine for life – an obscene potential outcome for cofounder Huda who is Palestinian Iraqi.

The charges are evidently political and it would seem that activists have incurred them for challenging the authority and military backing of Israel. This is certainly not outside the realm of imagination, when in 2020, only a month after the launch of Palestine Action, Israeli ministers met with then Foreign Secretary Dominic Raab regarding Palestine Action.

“In two years of direct action, Palestine Action have severely disrupted the smooth functioning of a business built on bloodshed. For this, we are facing intense political repression. Let it be known that we stand as the accusers, not the accused, and we fully intend to expose Elbit’s many war crimes, in particular, the Israeli arms company’s role in 74 years of occupation and dispossession lived by the Palestinian people. #ElbitIsGuilty, we are not.”

Everyone who is indignant to the march of warfare and disposession, who opposes the act of protest being met with lawfare, and most importantly, those who stand alongside the Palestinian struggle for life, we are requesting your support throughout the trial.

Details on how to support the #ElbitEight can be found on our website, and organisations and notable individuals can sign on to our open letter. Register for the Elbit Eight Legal Briefing on Tuesday September 13th. Keep on following the campaign under #ElbitIsGuilty.

For a more detailed timeline of the case, including relevant media, visit our website.