Above Photo: Miko Peled, standing back row, second from right, with students from the group Fuori Luogo, at the University of Milan. Photo | Miko Peled

MILAN, ITALY  — My lecture at the University of Milan was scheduled for the afternoon of October 9, 2019. That morning the university president, pressured by a local Zionist group, decided to cancel the lecture. The excuse given was that the lecture was scheduled on the Jewish holiday of Yom Kippur and this offended the “Jewish community.” The student organization that put together the event, Fuori Luogo, notified me that I should still come and that the event would take place as planned. If need be, they said, they would occupy the hall that was promised to them and proceed with the lecture. They asked that I arrive 30 minutes early.

It was a cloudy day and it began to drizzle as I took the bus from my hotel to the campus. I arrived just before 2 p.m., 30 minutes prior to the time the lecture was supposed to begin, and a group of students was standing in the campus courtyard with a large banner stating their refusal to succumb to pressure by religious groups. We stood outside of the hall for a while waiting for a lecture that was taking place to end. I was curious to see how things would unfold.

When the occupation is right!

The level of confidence and determination shown by the students was high and very impressive. Then, a few minutes before 2:30, the students decided we should go into the building. A plain-clothes cop was there trying to negotiate with the students. He was what they called “political police,” a unit that apparently deals with political issues, protests, etc.

The clock was ticking and the discussions in the hallway were taking place when the school administration proposed a compromise. The lecture could go on, but the students would get a different room. The students said no. At that point, it was decided that it was time to take action and the students proceeded to take the room that was promised to them. The previous lecture was not quite over but they asked the professor to end the lesson early so that that the university would not be able to take the lecture hall and use it for something else. It was the right move.

Student leaders announced that they were occupying the lecture hall and that they would not be pressured by any religious group. While they respect everyone’s right to freedom of religion, they said, they would refuse to let any group infringe on their freedom to hold the event. It was a sight to be seen. The police left the premises and the administration did not intervene any further to stop the lecture, which was well attended and proceeded as planned. It was proof that it is possible to stand up and fight the Zionist occupation, and to win.

The lecture was scheduled and advertised months in advance. The dates of the Jewish holidays were well known and if anyone had a problem with the lecture taking place during the Jewish holidays, they could have spoken up at any time before the day of the event. The decision to protest the lecture at the last minute demonstrates that the intent was to disrupt the event and create a situation where cancellation was the only option.

Zionists are accustomed to getting their way. In Palestine they kill and injure, arrest, detain and torture Palestinians and yet they are never held accountable. Outside of Palestine, Zionist agencies act like a mafia, using the weapon of “antisemitism” as a threat against anyone who opposes them. Silencing the event in Milan had little to do with me but it had everything to do with the local Zionist agency wanting to silence the debate on Palestine.

It was good to see that even though the university authorities in Milan, like other universities around the world, are beholden to Zionist pressure, the students here are not. For students in Milan, the decision to occupy the space that was promised to them was perfectly natural, and it was obvious that this was not the first time they had to resort to this type of action. While one can imagine that universities in other cities around the world, particularly in the U.S., would have escalated the situation — even resorting to bringing in the police, forcing the students out, and even arresting the students — in Milan this is not how things are done.

My friend Bassem Tamimi from the West Bank village of Nabi Saleh, a man who has been a fighter for freedom his entire life, was recently refused a visa to enter Australia. It is not the first country that has either refused or had created problems for him to travel, and Bassem is one of many Palestinians who experience this. He attributes this refusal to allow Palestinians to travel freely and to visit other countries to the fact that these countries, mostly Western democracies, are themselves occupied.

The Zionist occupation is maintained throughout the world through Zionist agencies that operate on behalf of Israeli interests and act as watchdogs to stop any real conversation on Palestine. In the U.K., as is now well known, Zionist agencies are in the midst of a vicious campaign to undermine, if not bring down, Labour Party leader Jeremy Corbyn precisely because of his views on Palestine. The occupation succeeds where people and organizations bow down to their demands instead of standing up to them, as was done in Milan.

Zionists in Italy learned their lesson in Milan, and the lecture tour continued with no further interruptions. The tour included two lectures in Milan at two different universities with hundreds of students in attendance, followed by a lecture in Turin, which was also very well organized and attended, and two lectures in the city of Cagliari in Sardinia.

Even in Cagliari, on the Island of Sardinia, Zionist pressure is felt and resented. The graffiti shown here, written on one of the walls around the University of Cagliari, says, “Zionists out of the University.” Here too, attempts by Zionist groups were made to shut down the event in which I spoke. These attempts were thwarted thanks to the local activists who engaged with the University president explaining that Zionist opposition to the event was baseless. Here again, my event was not unique — there is a history of Zionist opposition to any event openly discussing Palestine. 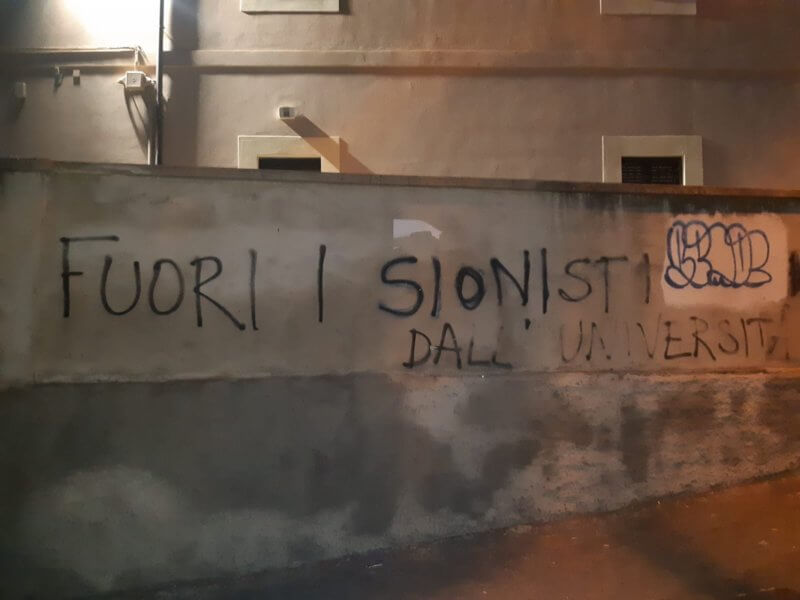 “Zionists out of the University.” Photo | Miko Peled

If Palestine is to be free of Zionist oppression and occupation, people around the world will need to free themselves first. This week in Italy it was made clear that it is possible to stand up to Zionism and win.