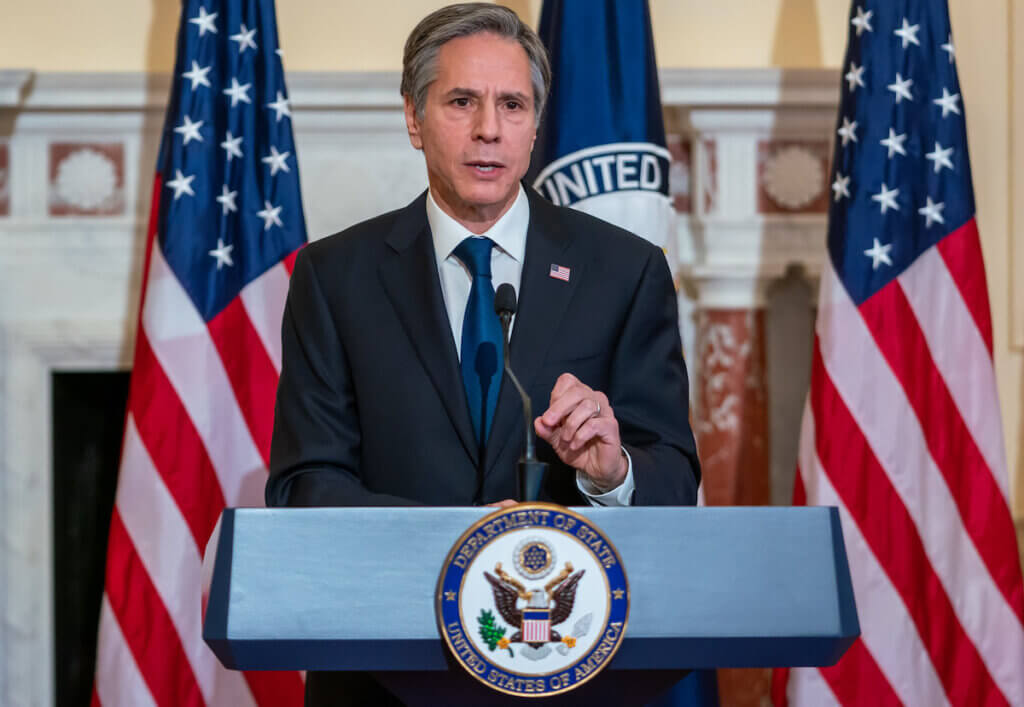 Above Photo: Secretary of State Antony J. Blinken delivers a speech on U.S. foreign policy at the U.S. Department of State in Washington, D.C., on March 3, 2021. Ron Przysucha.

Human rights groups are calling on the Biden administration to cancel plans to build a new US Embassy Compound on stolen Palestinian land in Jerusalem.

Two human rights groups have sent a letter calling on the Biden administration to cancel its plans to build a new US Embassy Compound in Jerusalem. The letter was sent on behalf of Palestinian families who would have inherited the land if it hadn’t been confiscated by Israel decades ago.

The letter, which was written by Adalah-The Legal Center for Arab Minority Rights and the Center for Constitutional Rights (CCR), was addressed to US Secretary of State Anthony Blinken and US Ambassador to Israel Thomas Nides. “We write on behalf of several Palestinian heirs to this land to formally bring this information to the State Department’s attention, and to demand an immediate cessation of this plan,” it reads. “We request a meeting with the State Department and the U.S. Embassy to clarify the U.S. Government’s position on Israel’s authority to extinguish property rights under the Absentees’ Property Law, and to ensure that the Biden Administration takes no further steps to entrench the unlawful dispossession of Palestinian refugee property and, more fundamentally, the decision to move the U.S. Embassy to Jerusalem contrary to international consensus.”

In December 2017 former president Donald Trump announced that his administration would move the U.S. embassy from Tel Aviv to Jerusalem, a decision that received widespread condemnation,” said Palestinian diplomat Hanan Ashrawi at the time. “President Trump seems to be hell-bent on annihilating the chances of peace and destroying the stability and security of the entire region and beyond, provoking violence and playing into the hands of extremists and terrorists around the world. He is willfully committing an act of the utmost folly which is not only illegal but also designed to inflame religious and spiritual sentiments, and raise the specter of sectarianism and religious strife.”

According to the New York Times Maggie Haberman’s recent book Confidence Man: The Making of Donald Trump and the Breaking of America, the Trump decision was a gift to the late GOP megadonor Sheldon Adelson who donated $20 million to a Super PAC working to elect him. “As a candidate, Trump promised that he would open an embassy in Jerusalem ‘fairly quickly,’ and after his victory, Adelson pushed him to act on it,” writes Haberman. “Over meetings during the transition and first year of the administration, Adelson assured Trump that the nightmare scenarios that he would be warned about in briefings as a possibility following such a move were overblown.”

In May 2018 the United States opened an interim embassy in Jerusalem while waiting for a permanent structure to be built. Biden has continued most of Trump’s policies, including his embassy move. In 2021 the State Department and the Israel Land Authority submitted plans for the compound and earlier this month the Jerusalem District Planning and Building Committee published a detailed plan. It’s subject to public objections until January.

The area designated for the embassy was confiscated by Israel following the Nakba via the country’s Absentees’ Property Law. According to Amnesty International the law “effectively gave the state control over all property belonging to Palestinians who were expelled or fled their homes” as the refugees were “deemed ‘absentees’ even though they never crossed an international border and, in many cases, remained within a few kilometers of their homes and land.”

A portion of the land belonged to the ancestors of the esteemed Palestinian writer and historian Rashid Khalidi. “The fact that the US government is now participating actively with the Israeli government in this project means that it is actively infringing on the property rights of the legitimate owners of these properties, including many US citizens,” Khalidi said in a statement earlier this year.