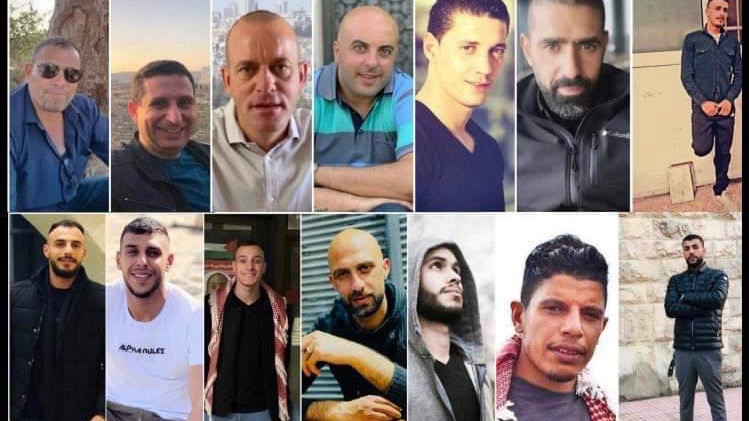 30 Palestinian administrative detainees in Israeli jails started their hunger strike on September 25, with more expected to join in the coming days.

On Sunday, September 25, 30 Palestinian political prisoners in Israeli jails started an indefinite hunger strike to protest the Israeli policy of administrative detention without charge or trial. The strike demanding an end to this policy has been organized under the slogan: “Our decision is freedom..our strike is freedom.”

The prisoners issued a joint statement before the formal commencement of their strike which was read outside the Israeli Ofer prison by their family members along with members of Addameer and other prisoner solidarity groups.

Some of the leading figures participating in the hunger strike are Nidal Abu Aker, Ghassan Zawahreh, and the French-Palestinian lawyer Salah Hammouri.

🚩 80% of the Palestinian detainees joining the hunger strike are themselves former prisoners, highlighting the Israeli occupation’s targeting of former prisoners who are routinely released, arbitrarily re-arrested, and placed in administrative detention for months on end. pic.twitter.com/14xrID8ZYw

The statement issued by the striking prisoners said that Leila Khaled (78), a member of the central committee of the Popular Front for the Liberation of Palestine (PFLP), has extended her solidarity with the prisoners by herself joining the strike.

According to Qadari Abu Baker, chairman of the detainees and ex-detainees affairs commission, at least 50 more prisoners are expected to join the hunger strike later this week, Palestineonline reported.

There are over 4,650 Palestinians inside Israeli prisons, according to Addameer. Of these, at least 743 are administrative detainees who have been incarcerated, many of them for years, without any formal charge or trial. The number of Palestinians arrested by Israel under this policy has increased in recent years despite widespread opposition and criticism. Many activists have termed the policy an essential element of Israel’s apartheid.

Addameer estimates that over 5,728 administrative detention orders were issued by the Israeli authorities against Palestinians between 2017 and 2021.

The policy of administrative detention was first introduced by the British colonial rulers during the mandate period. It was adopted by the Zionist state which came into existence, and was used particularly after Israel occupied Palestinian territories in 1967. The detention orders, issued initially for six months, can be extended indefinitely. Israeli courts have readily obliged the security forces in extending these orders.

Administrative detention has been criticized by Palestinians and international human rights groups, including the UN and Amnesty International. The policy is considered illegal and a violation of the basic human rights of people under occupation as it is only allowed during emergency situations. Palestinian groups have termed it a policy of “revenge” and collective punishment for resisting the Israeli occupation.

Israeli authorities have often tried to justify the use of the policy against Palestinians by claiming to possess “secret evidence” against the detainees which is neither revealed to prisoners nor their lawyers. Israel authorities also cite “security reasons” for not conducting trials or formally charging the prisoners.

Palestinian political prisoners have regularly opposed the policy by carrying out hunger strikes individually or collectively. Recently, a prisoner, Khalil Awawdeh, went on hunger strike for over 160 days against his wrongful confinement. He finally ended the strike after Israeli authorities agreed not to renew his detention once his current term ends on October 2.

Israel routinely rearrests Palestinians who have been released after spending long periods in jails, as administrative detainees. Recently, Israel rearrested Hisham Abu Hawash (40), who was released after a 140-day-long hunger strike in February this year. He had spent almost six months in prison without any charge or trial. Addameer claims that 80% of the detainees joining the hunger strike have served time in Israeli prisons before.

Palestinian and international human rights groups have termed the policy a form of collective punishment, underlining that the uncertainties that the families of the prisoners go through regarding the duration and condition of their detention amounts to psychological torture.