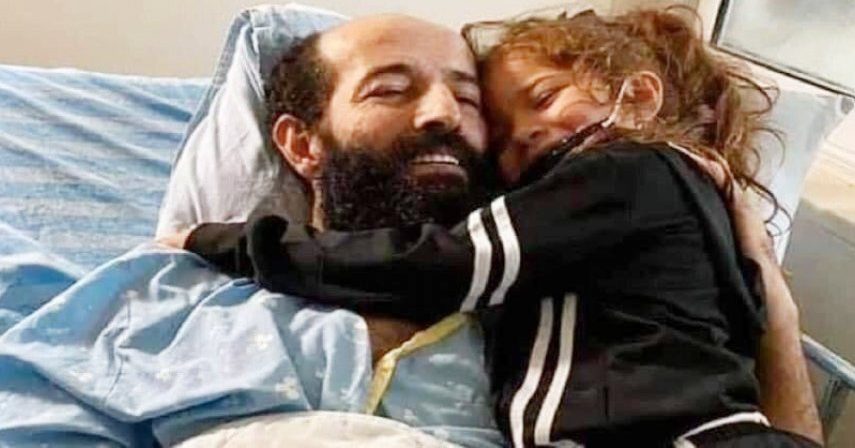 Above photo: From Key News.

Palestinian prisoner Maher Al-Akhras announced the suspension of his 103-day hunger strike, following an agreement to release him on November 26.

The Palestinian Prisoner Club said in a statement on Friday, “After 103 days of the heroic hunger strike by the prisoner Maher Al-Akhras, which brought the issue of the captive movement and administrative arrests back to the fore, as this strike was accompanied by a popular mass movement in all places of our Palestinian people.

The statement continued: “In light of the orientation of our people, the prisoner movement and leaders of our people, and with the efforts of the Palestinian National Authority and the brothers in the Supreme Follow-up Committee for the Arab masses at home and members of the Knesset from the Joint List, in front of the Israeli authorities with jurisdiction, it stipulates the absolute commitment of the Israeli authorities to release the prisoner Maher Al-Akhras on 11/26/2020, and a firm commitment not to renew his administrative detention, as he will spend the remaining period until his release receiving treatment in the hospital.”

The statement added: “In light of this, prisoner Maher Al-Akhras decided to end his hunger strike, starting today, Friday, 11/6/2020, and thus the prisoner Maher Al-Akhras has achieved a great victory over the prisoner and the occupation, and his victory complements previous victories achieved by other prisoners in confronting the policy of arbitrary administrative detention.”

In turn, Maher Al-Akhras paid a special greeting to his “brothers in the prisoner movement who stood by him and supported his strike.”

It is noteworthy that al-Akhras (49 years), from the town of Silat al-Dhahr in Jenin, began his strike on the date of his arrest on July 27, 2020.

He was subsequently transferred to administrative detention for a period of four months, and during this period the Israeli courts refused to release him despite the deterioration of his health.