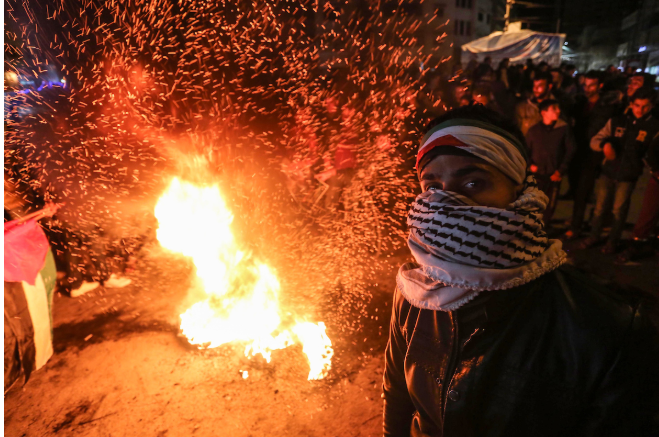 Palestinians Around The World Reject Trump’s ‘Fraud Of The Century’

Above Photo: Palestinian demonstrators burn tires during a protest against President Donald Trump’s Deal of the Century, in Khan Yunis in the southern Gaza Strip, January 28, 2020. (Photo: Ashraf Amra/APA Images)

Palestinians have responded to US President Donald Trump’s peace plan with a resounding “no,” expressing their frustrations with what they have dubbed as the “fraud of the century.”

From social media to the streets, Palestinians in the occupied territory and in the diaspora have rejected Trump’s vision for the region, criticizing the plan for granting unilateral concessions to Israel and further depleting the size of a future Palestinian state.

Palestinian leaders and members of rival factions showed a rare display of solidarity, with Abbas denouncing the plan in a meeting that included Hamas and Islamic Jihad representatives.

In the streets of Ramallah, Palestinians from rival factions called for reconciliation between Hamas and Fatah so the two ruling parties could present a united front against the Americans and Israelis.

As protests dragged into the late part of the night on Tuesday, it became overwhelmingly clear that Palestinians don’t plan on accepting any deal put forward by Trump, and would do everything in their power to stop his vision from becoming a reality.

‘The worst we have ever seen’ 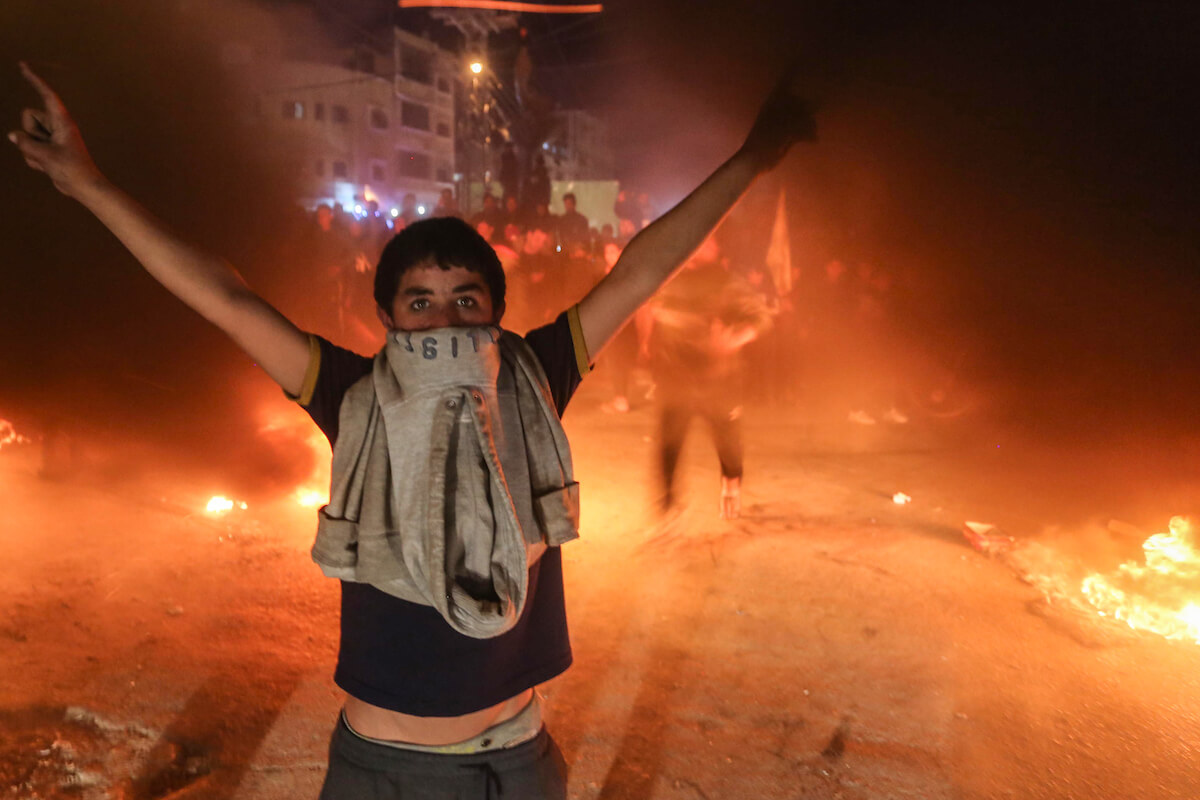 Demonstrations across the occupied Palestinian territory drew crowds of thousands of Palestinians of all ages and genders. In Gaza, protests kicked off even before Trump’s press conference Tuesday, and lasted well into the night and Wednesday morning.

In Gaza City, protesters waved Palestinian flags and carried banners saying “No to the peace plan” and “Palestine is not for sale.”

“We refuse Trump and Netanyahu’s decisions, and we will continue protesting in defiance of this unjust proposal,” Mohammed Abu Taima told Mondoweiss outside a demonstration in Gaza City on Wednesday.

Another protestor called Trump an “imbecile” who “has no right to decide the future of the Palestinian people.”

“We will decide our future, not Trump or Netanyahu, or anyone else for that matter,” Issa Abu Jazar said. “We have a right to Jerusalem, a right to return, and a right to this land. No one can take that away from us.”

Businesses and government offices shuttered their doors across Gaza on Wednesday as part of a general strike in protest against the peace plan. 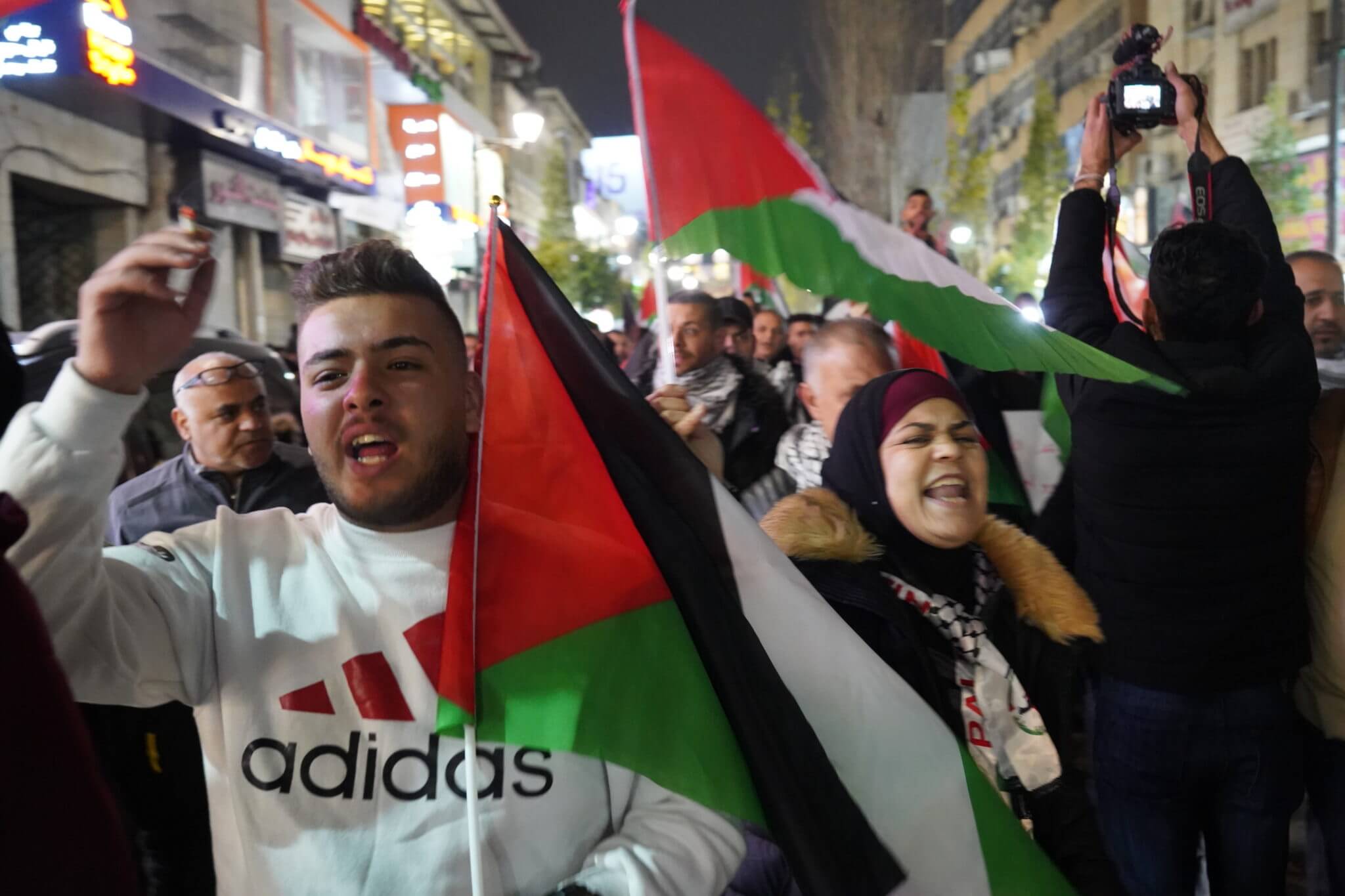 In the West Bank, protests from the north to the south were suppressed by Israeli forces, who were deployed across the territory ahead of Trump’s announcement in anticipation of increased tensions.

In Ramallah, thousands of protestors marched from the Manara Square in the city center to the grave of Yasser Arafat, burning images of US dollars to symbolize the rejection of the US attempts to “buy Palestinians” with economic incentives.

“Israel is practically the 51st state of the US,” Mo’in Ahmad told Mondoweiss. “America would never do anything that’s not in the interest of Israel. So how can this [plan] possibly be fair for the Palestinians?”

Dozens of protestors set off to the, and northern part of Ramallah to demonstrate outside the Israeli DCO checkpoint, where they were met with heavy tear gas fire from Israeli soldiers. Several people were treated by volunteer medics on the scene after collapsing from overexposure to tear gas.

On Wednesday, protests continued across areas in Bethlehem, the Jordan Valley, Ramallah, and Hebron. Local media reported that a 14-year-old was injured by a rubber bullet in Hebron, and that two protesters were allegedly injured with live fire outside of Ramallah.

By Wednesday evening, the Palestinian Red Cross reported that at least 41 Palestinians were injured by Israeli forces while protesting against Trump’s peace plan. 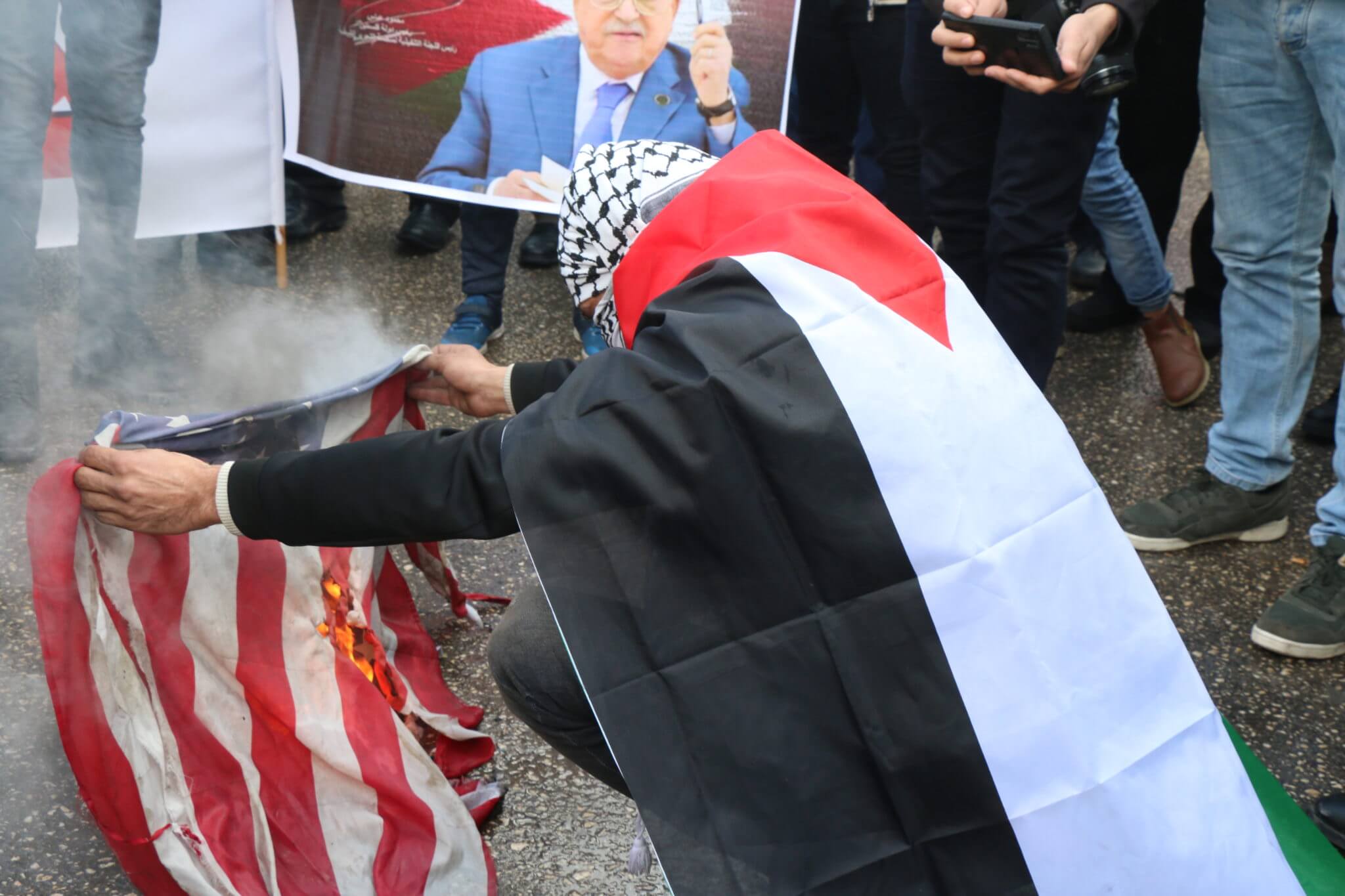 Protesters in Bethlehem burned the American flag and photos of Trump, shouting slogans like “Palestine is an Arab country” and “our demands are enshrined in law.” Some protesters demanded reparations from the Us and international community.

“Get out of our land!” protesters chanted as they marched towards a permanent Israeli military base at the northern end of the city, where Israeli jeeps fired dozens of rounds at protesters, many of whom were young children in attendance with their families.

“Trump cannot just decide that I no longer have a right to return to my original village from 1948,” Wijdan al-Azza, 60, a resident of a local refugee camp told Mondoweiss at the protest.

“In my life I have seen a lot of peace plans from different governments around the world,” she said. “But contrary to what Trump claims, this is actually the worst one we have ever seen.” 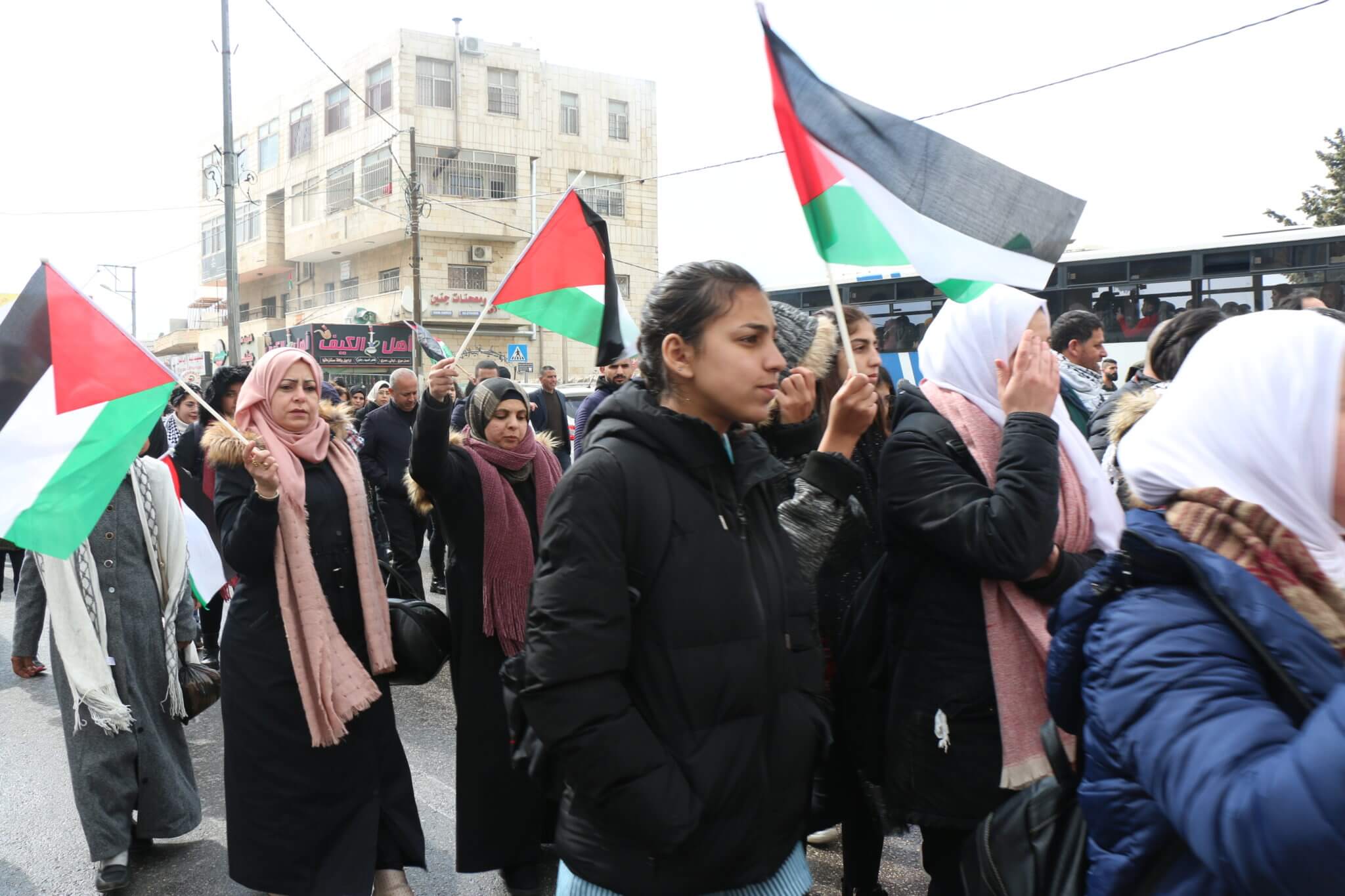 Palestinian women protesting in Bethlehem against the US peace plan (Photo: Yumna Patel)

Much like the response of the citizenry, the official Palestinian response to Trump’s plan did not deviate much further than its previous criticisms of the deal.

Abbas continued to call the plan the “slap of the century”, and said he would maintain his boycott of the US administration that began in December 2017 after Trump recognize Jerusalem as the capital of Israel.

On Wednesday, chief Palestinian negotiator met with the heads of the EU missions in Palestine, and said the meeting “focused on concrete measures that have to be taken.”

“The Annexation Plan is an attack against international law and the international system as a whole. This is a moment of truth #PeaceNotApartheid,” Erekat tweeted.

Today’s meeting with the EU Heads of Mission focused on concrete measures that have to be taken. The Annexation Plan is an attack against international law and the international system as a whole. This is a moment of truth #PeaceNotApartheid 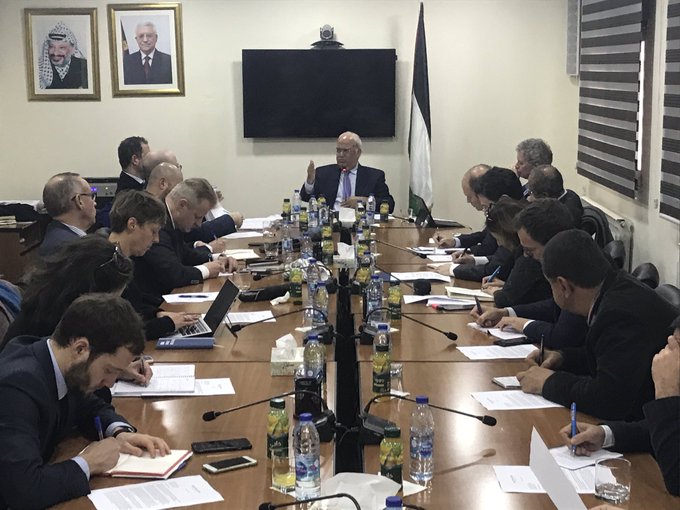 28 people are talking about this

Palestininian Prime Minister Mohammed Shtayyeh called on the international community to reject Trump’s plan, saying “It gives Israel everything it wants at the expense of the legitimate national rights of the Palestinian people.”

The so-called “deal of the century” is neither based on international legitimacy nor international law. It gives Israel everything it wants at the expense of the legitimate national rights of the Palestinian people. http://english.wafa.ps/page.aspx?id=3x9X8sa114854696781a3x9X8s …

61 people are talking about this

While Palestinian demonstrators called for a return to the days of the intifada and demanded the cancellation of the Oslo Accords — a threat made several times by Palestinian leaders in recent months — many were dissapointed to see the leaders sitting in cabinet meetings and discussing plans of action, rather than following through on any of their promises.

Following the release of the plan, social media was inundated with criticisms of the plan, specifically regarding the “conceptual map” showing the proposed re-drawn borders of a “two-state” solution. 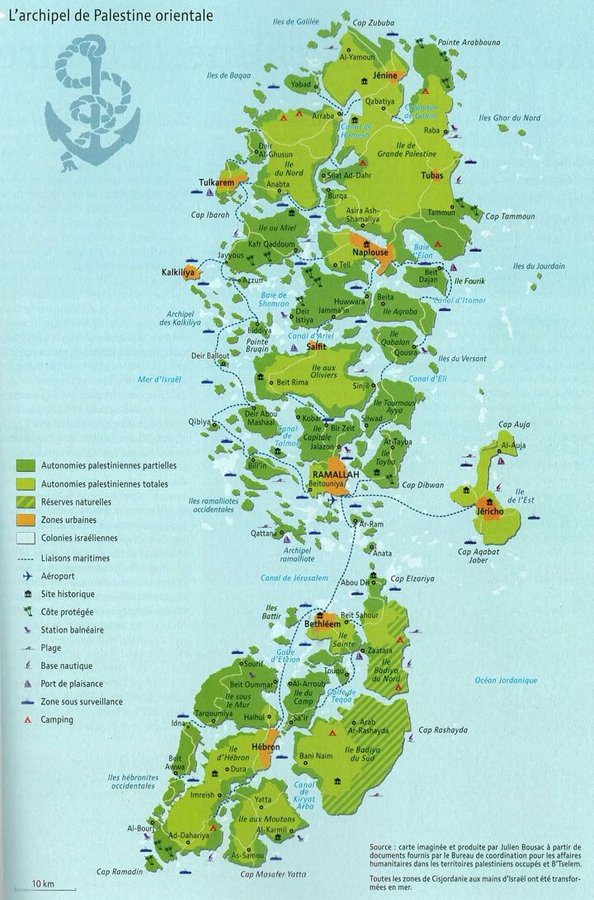 80 people are talking about this

Side-by-side comparisons of the proposed Palestinian state with the apartheid-era South African Bantustans went viral, as activists and scholars criticized Trump and Netanyahu for advocating for an apartheid-like system in Palestine.

30 years after the fall of South African apartheid, Trump and Netanyahu are imposing their own #apartheidplan on Palestinians, complete with segregated Jewish-only settlements built on stolen Palestinian land. 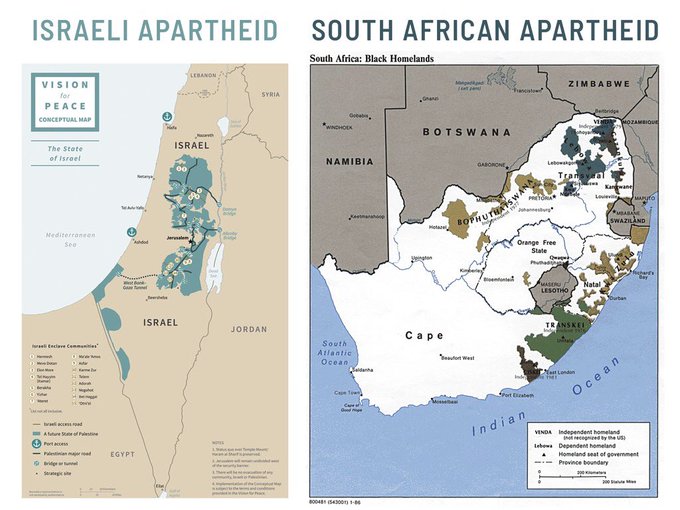 830 people are talking about this

People slammed Trump’s idea of connecting small Palestinian enclaves with a series of roads and tunnels, criticizing the fact that his idea of a future Palestinian state would be one without any sovereignty over its borders.

They want to put us in permanent, high-tech cages and call it peace. #DealOfTheCentury #ApartheidDeal #Palestine #PalestinianFreedom

1,758 people are talking about this

One of the major criticisms voiced by those opposed to the plan was the lack of inclusion of Palestinian voices in the proposal, and the notion that Palestinians should agree to a plan that inherently ignores the core issues of their struggle, or else they are enemies of peace.

Netanyahu logic: If Palestinians agree to land theft, annexation, no refugee return, subjugation and no means of defense, Israel will negotiate with us.

1,265 people are talking about this