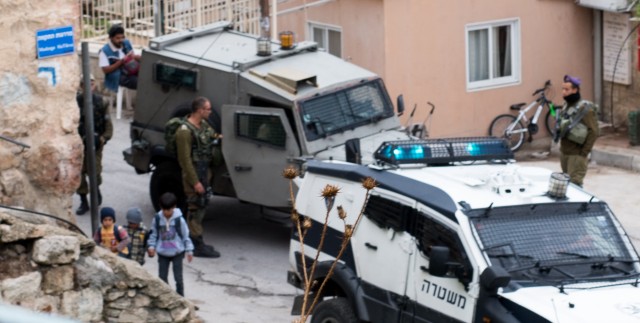 Palestinians Call For End To ‘Closed Military Zone’ In Hebron

Above photo: Hebron, Palestinian children must pass through military checkpoints to get to their school which is surrounded by illegal settlements. By Blogsaltnes.

Hebron – The International Solidarity Movement is calling on the international community to take immediate action regarding the continuous closure of the Tel Rumeida neighborhood and the part of Shuhada Street that has remained accessible to Palestinian residents since the Ibrahimi mosque massacre in 1994, in occupied al-Khalil (Hebron). For more than a month, Palestinians and internationals have been denied access to this part of the city since the Israeli forces have declared the area a ‘closed military zone’.

The ‘closed military zone’, first declared on November 1st 2015, was designed to include Palestinian neighborhoods while excluding adjacent illegal Israeli settlements. This discriminatory closure is being upheld by continuously renewed ‘military orders’ that lack official signatures or stamps. Palestinian residents were forced to register with the army or else risk being barred from their homes, while Israeli settlers are free to roam the streets without being stopped.

“This is yet another step in pushing Palestinians out of Tel Rumeida and Shuhada street”, says Jenny, from the ISM team in al Khalil.

Such a restriction of movement clearly constitutes a collective punishment on the whole Palestinian community, illegal under international law. Article 33 of the Fourth Geneva convention specifically states that “no protected person may be punished for an offence he or she has not personally committed. Collective penalties and likewise all measures of intimidation or of terrorism are prohibited.”

Tel Rumeida resident Abed Salaymeh explains : “soldiers and settlers are making life for the Palestinians intolerable to force them to leave their houses voluntarily. This is a crime under international law. They are targeting activists to silence the truth and stop the truth from reaching the whole world”.

International and local activists are increasingly at risk of direct attacks by Israeli forces and illegal settlers, as they are specifically targeted for their efforts to document and report on human rights abuses.

Activists are denied access to areas by Israeli forces and face unfounded arbitrary arrests, such as on the 3rd of November, the 26th of November, 27th of November, and most recently on the 28th of november; purely on Israeli forces’ accusations that lack any evidence. Human rights defenders, whose work the United Nations stressed as important, are increasingly threatened even inside their homes and offices or illegally kicked out of them.

The Israeli forces’ attempts to silence the Palestinian voice on the events goes hand in hand with the closure of Palestinian radio stations in clear infringement of the freedom of press and opinion, acknowledged in the Universal Declaration on Human Rights (UDHR) of 1948, article 19: “Everyone has the right to freedom of opinion and expression; this right includes freedom to hold opinions without interference and to seek, receive and impart information and ideas through any media and regardless of frontiers”.

“It is important to document in order to expose Israeli crimes”, explains Imad Abu Shamsiyyeh, a Tel Rumeida resident.

These inhumane measures come after Israeli forces gunned down Homam Adnan Sa’id, 23,  and Islam Rafiq ‘Ebeido on the 27th and 28th of October in the Tel Rumeida neighbourhood. While the Israeli government claims that both were ‘neutralized’ when attacking Israeli forces, many eye-witness statements refute this claim; CCTV footage has not yet been released by the Israeli forces. Since the beginning of October, a total of 112 Palestinians have been shot and left to bleed to death without medical aid in a similar manner in what Amnesty International refers to as ‘unlawful killings‘.

The outlined measures, restrictions, and human rights violations are focused primarily and exclusively on making the Palestinian voice – and in the long run the inhabitants of the area – disappear altogether.

The ISM calls for:

If your organisation wishes to support our call, contact us : palreports@gmail.com

For more information, read: Hebron: A Closed Military Zone that should Open Eyes by Jesse Rubin.