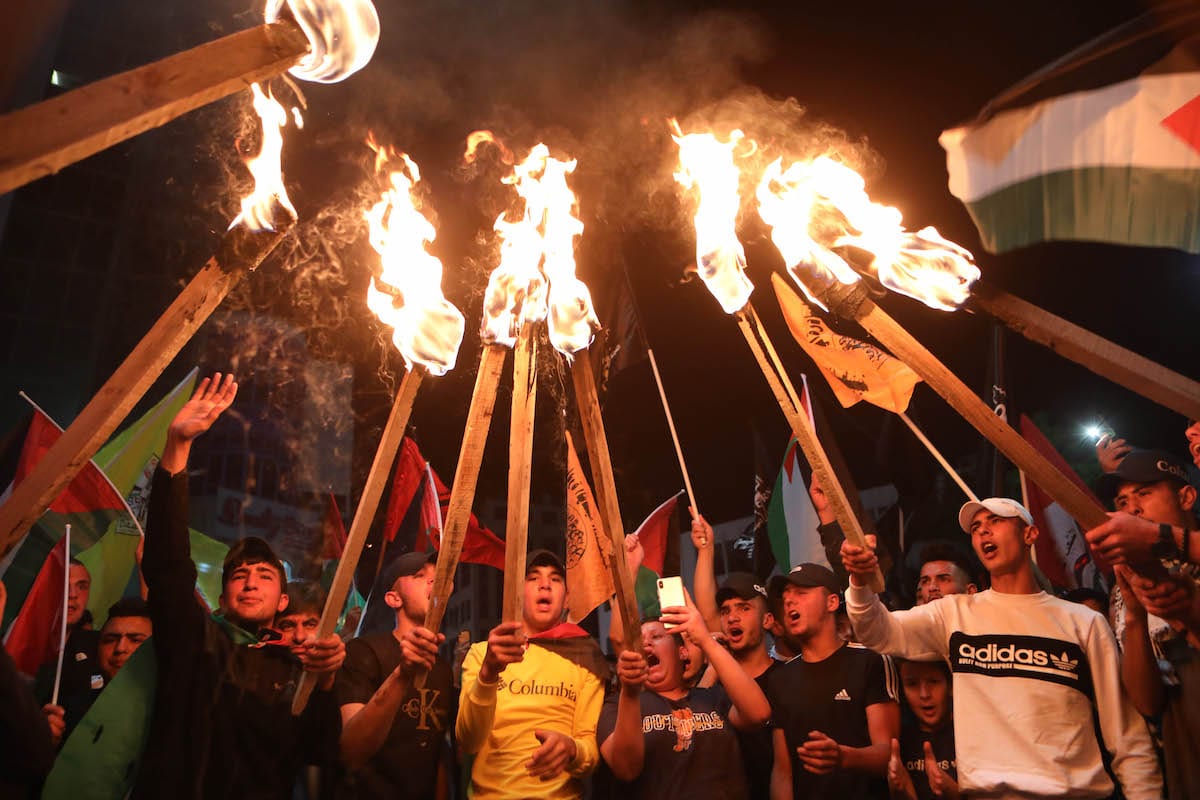 Palestinians Have A Right To Defend Themselves

Above Photo: Palestinians light torches during a protest against attacks by Israeli police with tear gas, rubber bullets and stun grenades on Palestinians at Masjid al-Aqsa, in Nablus, West Bank on May 11, 2021 by Mamoun Wazwaz/Anadolu Agency

The scenes we’ve been witnessing on our screens coming out of occupied Palestine this week are unprecedented.

What has been happening is a unified national uprising of the entire Palestinian people against Israeli ethnic cleansing, apartheid and aggression.

Resisting colonial fragmentation of their body politic, Palestinians from all segments of the people have risen up with one voice: enough. We are one people. In Jerusalem, in Gaza, in the West Bank.

And also in the Palestinian territories occupied in 1948: in Jaffa, in Acre, in Haifa in Lydda.

It begun in Jerusalem last month, with the intensifying campaign of expulsions against the Palestinians in the Sheikh Jarrar neighbourhood of East Jerusalem, and increased international attention on the plight of the people there.

To make matters worse, gangs of Israelis began roaming the streets chanting “Death to the Arabs” and beating up any Palestinian they could get their hands on. Israel’s militarised “Border Police” forces naturally took the side of the aggressor. The situation began to descend into pogroms – mob violence against a racial group backed or allowed by the state.

On 7 May, Israeli forces stormed the al-Aqsa Mosque during Friday prayers, assaulting worshippers and attacking them with tear gas and rubber-coated metal bullets, leaving 200 injured.

But then something happened. Something almost unprecedented.

Palestinians from the ’48 territories – the Palestinian citizens of “Israel” – began to descend on the mosque – Islam’s third holiest site.

Driving en masse to Jerusalem, they were blocked in the middle of the highway by Israeli army forces. So, they got out of their cars and began to walk to Jerusalem.

Palestinians are making a mockery of the decades of Israeli propaganda which has attempted to fragment, isolate and divide them. They know they are one people and are acting as such.

On Monday, Israeli settlers planned to go ahead with their annual “Jerusalem Day” march in the city, during which mobs roaming the streets habitually chant “Death to the Arabs.” The march was eventually rerouted and ultimately cancelled, due to Palestinian resistance.

But not before Israeli forces made a second assault against the mosque, injuring even more worshippers during the holy month of Ramadan. They ransacked the Mosque.

But then, a new event took place which down Israel’s enforced fragmentation lines between the segments of the Palestinian people. The armed Palestinian factions in Gaza fought back on behalf of Jerusalem.

Palestinian resistance factions issued a demand on the Israeli occupier: withdraw from the mosque within two hours or we will strike your forces in Jerusalem.

They refused, and so the fighters struck Jerusalem for the first time in years. It was a direct response to Israel’s attacks against Palestinians in Jerusalem, the resistance said.

Contrary to Israeli propaganda claims about Gaza supposedly being held “hostage”, it was actually the people of Gaza – popular pressure from the street level – which pushed and demanded the movement to begin striking back in Jerusalem.

As the rockets fell, the “Death to the Arabs” festival that was Israel’s Jerusalem Day was swiftly abandoned as the warning sirens sounded across the city. The settlers fled, but the Palestinians cheered.

The resistance imposed a new balance upon Israel.

Israel then proceeded to carry out a massacre against Gaza. As I write this, more than 100 Palestinians, including 30 children, have been killed so far.

But the West’s politicians, despite expressing “grave concerns” about Israel’s actions, still do nothing – except to continue their military support for Israeli crimes.

At the exact same time that they express toothless “concerns” about what Israel is doing, they also articulate open condemnation of Palestinian resistance. They condemn Palestinian “terror,” and they condemn the rockets.

Just as every colonised people around the world have the moral and legal right to use armed resistance to defend themselves, so too do the Palestinians have the right to resist, including by using reasonable force.

It is not enough to express “concerns,” to condemn or even to express solidarity. Palestinians are demanding concrete material support for their resistance.

The absolute bare minimum for us in the West is to stop participating in Israel crimes: to take part in the boycott, divestment and sanctions campaign against Israel: BDS.

American and British politicians are currently opining loudly about Israel’s supposed “right to defend itself. But how come nobody ever talks about Palestinians’ right to defend themselves?

Why is that we are supposed to accept that Palestinians are the only people on earth not entitled to defend themselves?

Despite their modest military capabilities compared to the Israeli war machine, the Palestinian resistance factions have already demonstrated impressive reach. The “Iron Dome” air defence system has been overwhelmed, and Palestinian rockets have hit Tel Aviv – indeed have hit targets all over occupied historic Palestine.

Palestine’s fighters in Gaza are not going down without a very serious fight. And Israel knows this very well, which is why it is currently hesitating to launch its threatened ground invasion of Gaza.

There is a now new calculation that Israel has to consider. It knows it cannot defeat the Palestinian resistance militarily – the 2014 war already showed that.